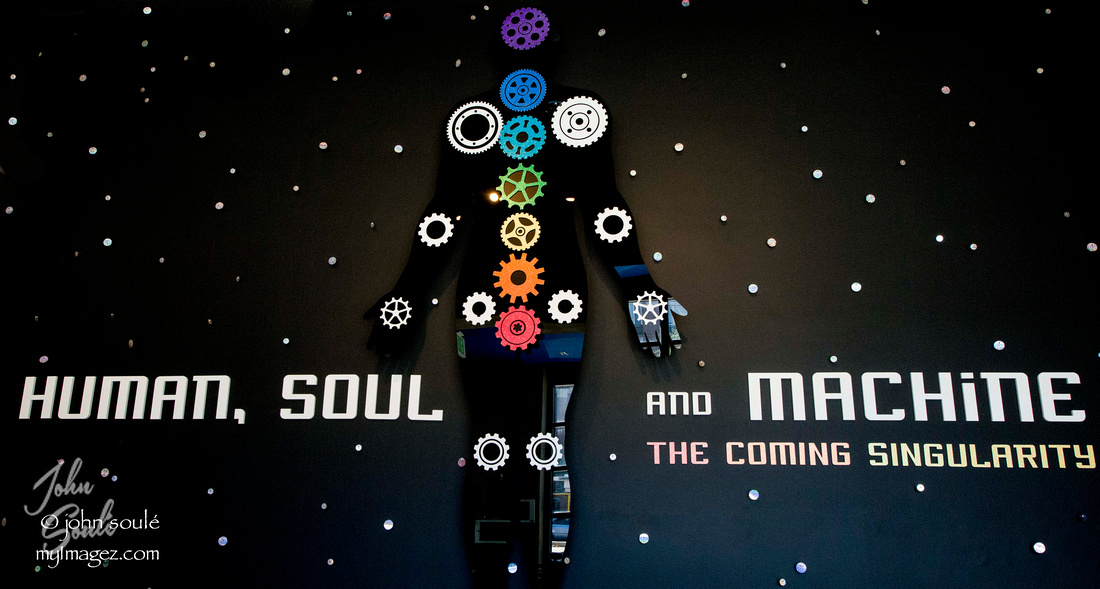 The American Visionary Art Museum's 19th original thematic exhibition is a timely and playful examination of the serious impact of technology on our lives, as seen through the eyes of 40+ visionary artists, cutting edge futurists, and inventors. Pleasing to an audience of Nobel Prize winners and schoolchildren alike, this show asks, "Two billion personal computers later, post DNA-sequencing, are we on the road to becoming a better, healthier, happier, less warlike, human race?" 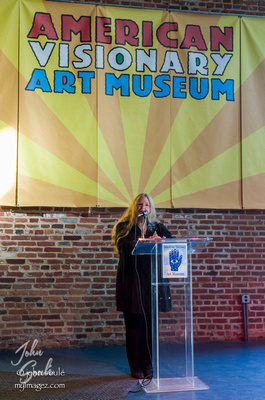 AVAM's newest exhibition takes on its most complex subject yet: examining the rapid and ever-increasing impact of artificial intelligence, robotics, nanotechnology, genetics, 3D printing and Big Data on nearly every aspect of human life. This thought-provoking exhibit investigates technology's influence on issues of privacy and surveillance, employment and manufacturing, longevity and health, defense and warfare, farming and food, access to global and personal information, creative invention, and entertainment. This is high stakes, new territory never before negotiated by any prior civilization. Kevin Kelly, co-founder of Wired Magazine, well-defined the unprecedented nature of our times: "Singularity is the point at which all the change in the last million years will be superseded by the change in the next five minutes."

Curated by AVAM founder and director Rebecca Alban Hoffberger, this stirring show harnesses the enchanting visual delights of remarkable visionary artists and their masterworks.   A few of those artists are discussed here: 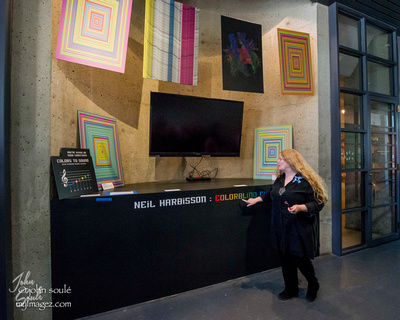 Neil Harbisson is a Catalan artist, composer and cyborg activist best known for his ability to hear colors and to perceive colors outside the ability of human vision.

Neil was born with achromatopsia, a condition that only allowed him to see in grayscale. In 2003, he took part in the development of the eyeborg, a cybernetic eye permanently attached to his head that allows him to hear the frequencies of colors through bone conduction (including infrared and ultraviolet). Harbisson started to feel like a cyborg, a union between his organism and cybernetics, when he started to hear colors in his dreams. Since then, he creates “sonochromatic” artworks and performances that explore the relationship between color and sound, and the relationship between bodies and cybernetics. In 2010, he co-founded the Cyborg Foundation with Moon Ribas, an international organization that aims to help people become cyborgs, defend cyborg rights, and promote cyborgism as an artistic and social movement. (Neil Harbisson bio courtesy the Cyborg Foundation, http://eyeborg.wix.com/cyborg) 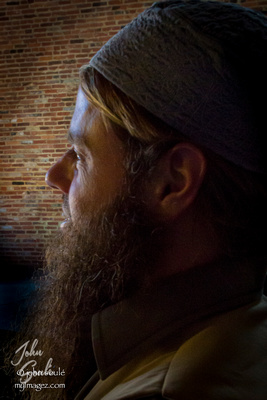 Kenny Irwin Jr brought a special installation from his Robo-Lights display, glowing inside of a central black box theater at the heart of this exhibition.   Kenny is an incredibly creative artist who has a two acre art park located at this home in Palm Springs, California where his father owns a spa and resort. 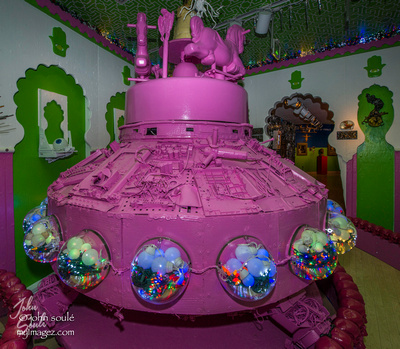 At the age of thirteen, Kenny began his ornate and imaginative RoboLights installation.  In its first year, the installation featured fifteen thousand lights and has now grown to well over six million and draws visitors from all over the world.  Some of the sculptures include over two hundred robots and - some as large as 68 feet tall and weighing in at over 54 tons. 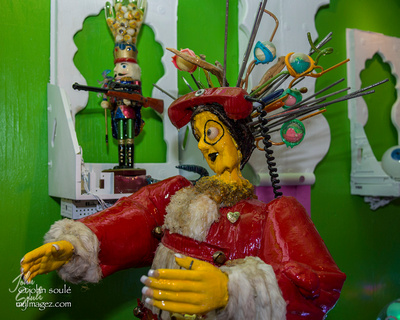 Sculpture for the Conan O'Brien Show by Kenny Irwin, Jr

In 2010, Kenny was asked to create original sculptures for the 'Conan O'Brien Show'. 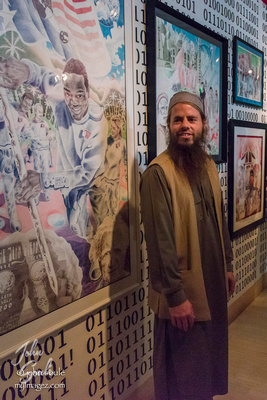 His sister Carol explained that Kenny has been able to remember his dreams since birth and they have inspired many of his sculptures and drawings. His dreams are always about other forms of life, ultra-advanced technology and tell a coherent story from beginning to end. 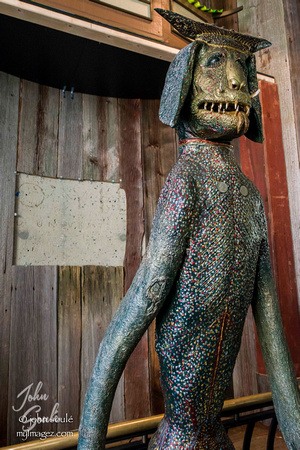 O.L. Samuels works mainly with found wood, such as tree trunks, roots, and old wood furniture, which he will carve for months at a time.  Samuels is color blind yet paints several layers of wild, expressive colors 'using every color so he doesn't leave any out.'  He is known for his imaginative images, featuring dreamlike figures, and mythical creatures, each with a story about its existence.

His work often has a spiritual message.  Samuels became a lay minister later in life. He is considered one of the most talented self-taught artists in America by museums across the country.

His 7' tall 'Godzilla', a creation first imagined in response to the devastating use of the A-bomb on Hiroshima and Nagasaki, greats visitors on the second level of the exhibit. 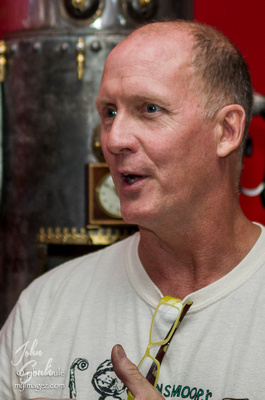 Allen Christian began crafting art in the first grade.  He continues today making singular works of art fashioned out of everyday objects, from bowling balls to badminton birdies.  Christian says he 'discovered the essence of humanity through four objects, through inanimate objects that are cast-offs...I try and give these inanimate objects a new lease on life, to imbue them with emotion.' 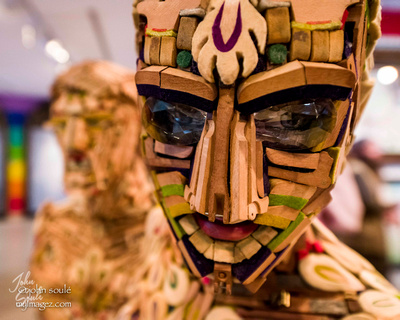 Allen displayed two collections - the life-sized 'Piano Family' representing 'String Theory' (made from spare piano parts) shown above and a robot made from various 'trashed' parts as shown on the right. 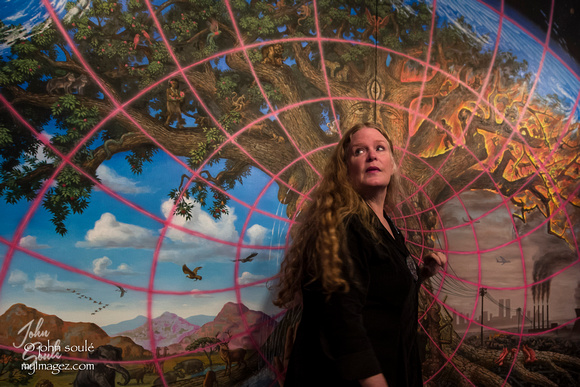 Alex Grey, Gaia from 1989 (oil on linen) as presented by Rebecca Hoffberger

Alex Grey began his investigation into the nature of consciousness in the 1970's through Tibetan Buddhism and the study of the human body.  While employed at a medical school morgue led to a unique series of artworks entitled 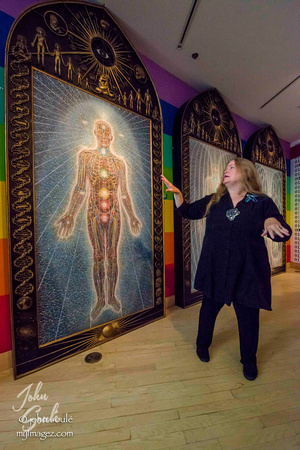 "The Sacred Mirrors" which portray an 'x-ray' of multiple dimensions of reality, interweaving physical and biologic anatomy with psychic and spiritual energies. 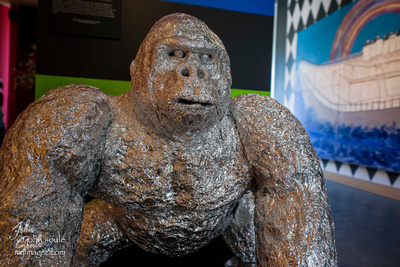 Dean Millien grew up without store-bought games and toys and began at an early age making his own miniature sculptures and animal creations that he called 'tin things'.  Starting with miniature sculptures rendered out of aluminum foil or spine, Millien has only recently has begun to create life-size figures.
His creations have a wide following and can be found in collections such as Citibank, J. Crew and Paper Magazine.  His giant all aluminum foil 'Gorilla' is part of the AVAM exhibit. 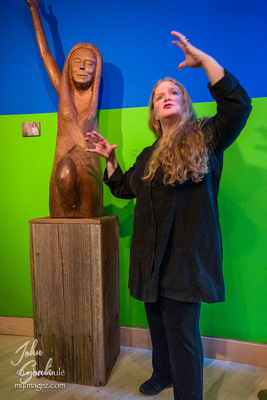 Fred Carter came from southwest Virginia in a area known for its lush wooded mountain area and the legendary woodsman, Daniel Boone.  In growing up, his home was filled with music, books and Native American artifacts from the surrounding area.
Fred's adopted son died tragically - an event that would influenced his artistic practices for the rest of his life.  At the young age of 72, now in his second marriage, Fred became a father again.  Fred was always a hard worked and had helped run the family farm from boyhood and became a capable stonemason. 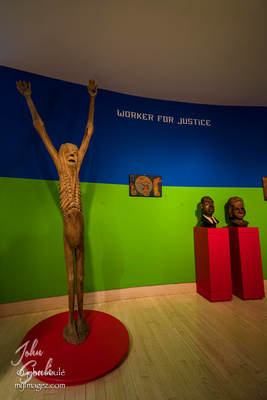 Using his various talents, He founded the Carter Home Improvement Company.  Wanting to educate young people in the ways of their independent pioneer forefathers he gathered his collections of farming, mining, and other artifacts and founded The Cumberland Museum in 1970.  Until his death in 1992, Fred stayed abreast of word news, always struggling  to better understand humankind's addiction to war, cruelty, destruction of nature, and the devastation of so many drug-addicted young people.  'Man is becoming so dehumanized and desensitized' Carter said.  'The Biblical people would call that Armageddon.  Its just the destruction of man by himself.'
Fred's massive wooden carvings were created as a warning of destruction from industry's manipulation of nature. 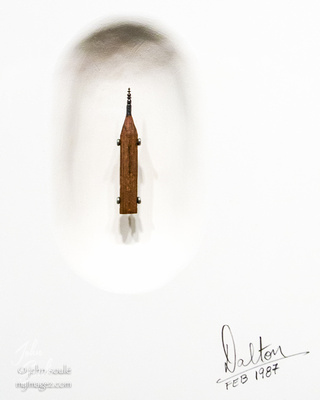 Dalton Gheti, comes from Sao Paulo, Brazil.  At an early age, Dalton, like most young students in Brazil, carried a small pocket knife to school. While the other children brought their pocket knife to sharpen pencils, Dalton, however, used his to cut intricate patterns into the pencil wood, as well as in soap and chalk. 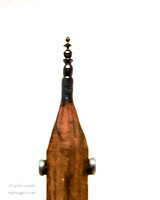 Today, Dalton likes carving in pencil graphite because 'it's homogenous, cuts in the same direction (not like wood which has a grain) and is both hard and soft'.  Dalton uses on magnifier when he creates - only patience with some of his pieces taking years to complete.
All of his works of art are signed in pencil.
Steve Heller grew up in Brooklyn and Queens, New York.   His inspiration came from his father who was always fixing the neighbors small appliances.  After being introduced to Picasso's Baboon with Young, a bronze-cast sculpture in which the figure's head was rendered with toy cars, 'That was it,' said Steve, 'cars have been my life since.' 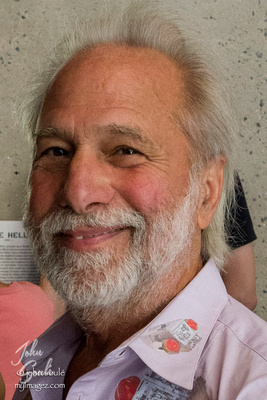 As a youth Steve combined parts form model car and airplane sets to create composite machine models.  Later the parts came from scraps he found near the park.  He became a full-time artist by the age of 25, having never studied art. 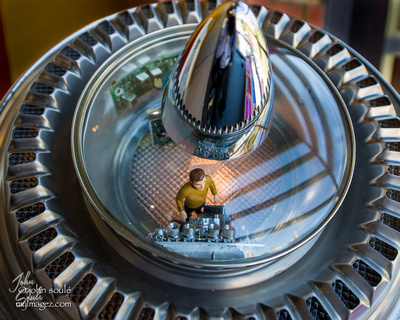 His childhood interests in 'cars, robots, rocket ships and dinosaurs...' continued to be his obsession.  His custom car, the Marquis de Soto, recently won The New York Time Collectible Car of the Year Award. 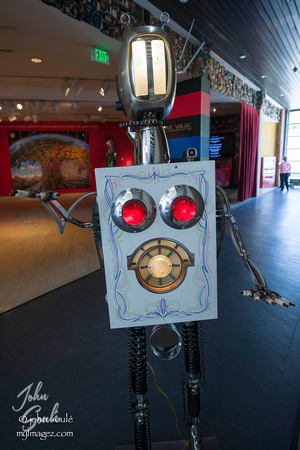 As visitors enter the second floor exhibit, they are greeted at the top of the stairs by one of Steve Hellers robots made from car parts. 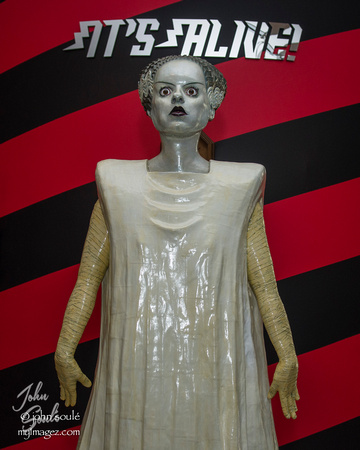 Adam Kurtzman, from the time he could stand, has been drawing and "making" art of some kind.
Kindergarten was a pivotal creative experience for Adam.  Unlimited materials, and lots of approval, for doing what he enjoyed most were available.
The first artistic epiphany he can remember, came in 1966, when, lusting for a "Batman" figure, he discovered paper mache, and created a model for himself. The feeling of power and accomplishment was nothing short of rapturous, and for the next 40 years, Adam has spent his life trying to relive that rush.
Paper mache has been a loyal and challenging ally over the decades, and in his search to expand his horizons, he has worked in a host of other commercial materials, but paper, bronze and glass seem to serve him best, and have held his interest the longest.
Adam's Bride of Frankenstein is on exhibit represents humankind's historic fascination with control over life and death. 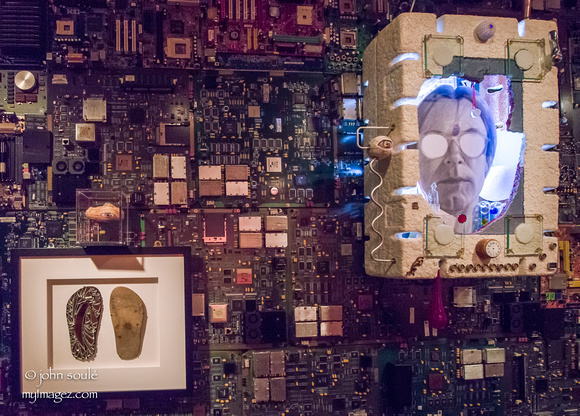 Christopher Moses's display consisted of three individual pieces of art which had been hung on a background of computer system boards.  One piece was a glowing box covered with eggshells entitled "Masturbox" (see video below).  There was a smaller piece to the left and a framed oil painting entitled "The Singularity (Unfinished)".
Chris originally comes from Los Angeles California but now splits his time between the US and the coastal jungle of Mexico where he creates his art in daytime, under the sky and trees, and in the open air at the edge of the sea. 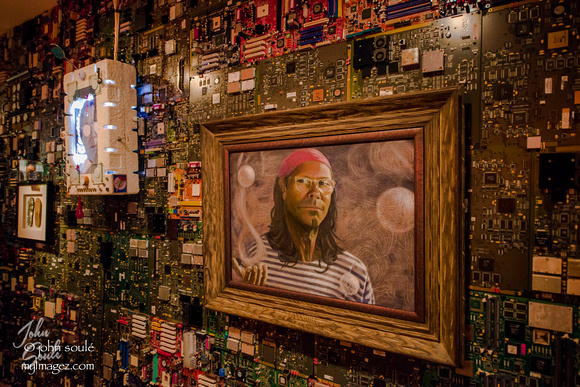 "The Singularity (Unfinished)" by Christopher Moses

"The paintings of Christopher Moses embody a longstanding and ongoing investigation into the relationship between the visual and the actual - between that which the eyes see and that which constitutes reality.
Moses’ path as a visual artist and the overall thematic thrust of his work may have less to do with the artistic precedents in his own family (his father worked as a commercial artist, and both parents were hobbyist painters) than with the special nature of his visual experience of the world from the time he was born.
Despite childhood surgery and other medically prescribed procedures aimed at correcting the problem, Moses’ eyes have persisted in showing him a doubled version of whatever is in front of them when they’re open - the “seeing double” that those with “normal” vision can experience voluntarily by crossing our eyes or consuming far too much alcohol. One result of Moses’ inherent, evidently uncorrectable double vision is his lack of trust that what he sees corresponds to reality." - Tom Patterson, author and art critic