This June, over 30,000 entrants from across the United States and forty countries came to the 17th annual Suja Rock 'n' Roll Marathon held in San Diego, California.  Originating in 1998, San Diego became the foundation for the Rock 'n' Roll marathons and half-marathons that are now held throughout the world. The series has enjoyed global appeal, tremendous local support and has firmly established itself as the ideal running platform.

The original 1998 Rock 'n' Roll Marathon is still recognized as the largest inaugural marathon in the United States.  Over the 17-year history of the race, runners have raised more than $176 million to support blood cancer research and patient services.  This year over $1.8 million dollars is expected to be raised for charity. The Rock ‘n’ Roll Marathon Series has quickly become one of the most successful charity fundraising events in the world.

The race consists of a Marathon (26.2 miles), Half-Marathon, Wheelchair Competition, and a two-person Half-Marathon Relay.  For this article, I focused on the full marathon.

It was cloudy, and in the 60's, when the marathon kicked off just after 6:15am.  It began with the wheelchair division competition ready to take on the full 26.2 mile course.  These specially designed wheelchairs had to negotiate miles of flat road, hills and some quite sharp turns. 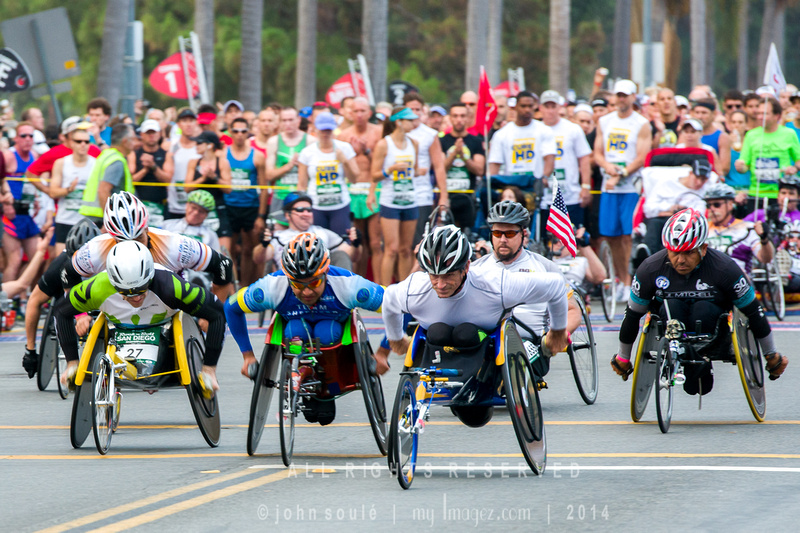 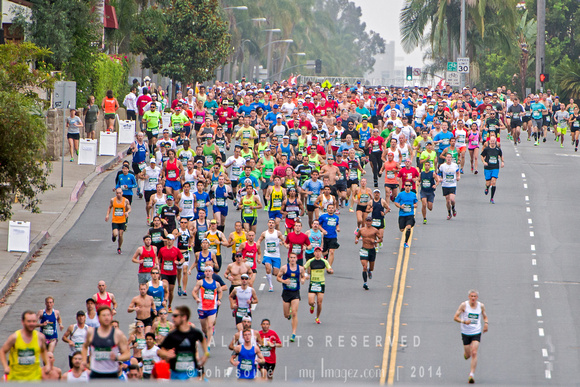 Runners were given seven hours to complete the marathon. The half-marathon and two-person relay option were given a four-hour time limit. 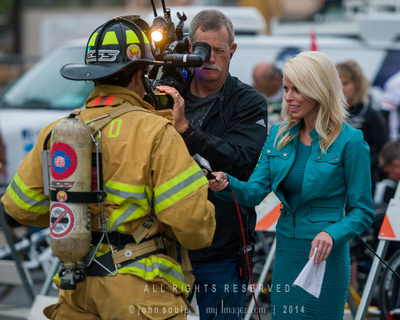 Fireman Jose Zambrano, seen here being interviewed by Hannah Mullins of San Diego News10, wore his full gear and helmet while running the full Marathon in honor of fallen firefighters that have died in the line of duty and their families through the National Fallen Firefighters Foundation.  His effort would take him just over 6 hours to complete the course. 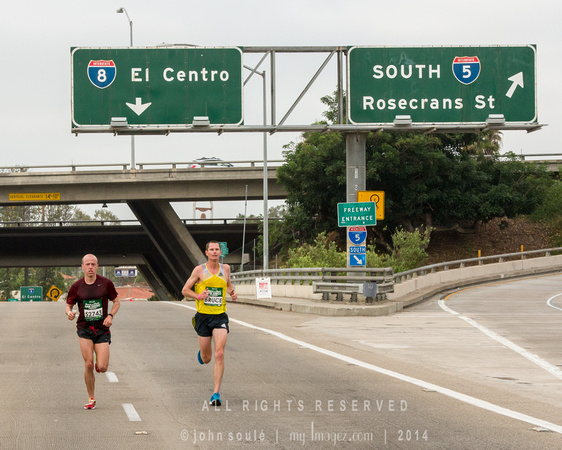 The 26 mile course incorporated a scenic tour of San Diego's neighborhood charm, passing through downtown, Little Italy, Old Town, along the airport, the coastline near Mission Bay and onto parts of the freeway.  Road closures were a massive undertaking as you could imagine.

With the exception of six miles around Balboa Park, both the marathon and half-marathon courses took separate routes. 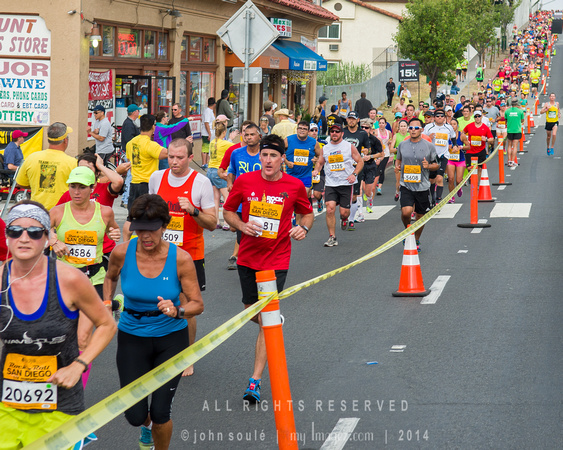 The line of half-marathon runners seemed to stretch as far as the eye could see.  The course was not without its challenges. In addition to the necessary endurance needed to complete this distance, there were a few upgrade hills to negotiate, especially near the end of the marathon course.  Rising temperatures also added stress for even the best runners.

Cheering for the Runners 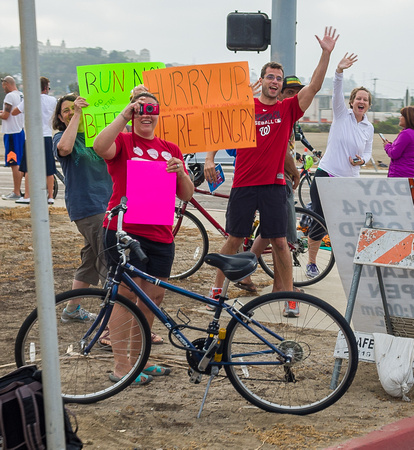 Some supporters, such as husband Matt Scarlato, along with the sisters and friends of Christina Scarlato (first-time marathon runner from Washington DC, #52483 below), resourcefully found various modes of transportation to get to locations throughout the course to show their support.  Many supporters walked, rode bikes, took cabs or used the city trolley transportation to get around to multiple locations to cheer on the runners as they passed by. 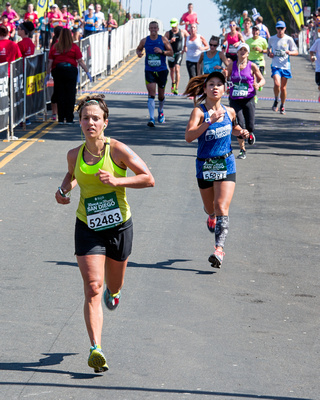 The runners found inspiration from the cheers of the supporters along the sidelines.  "It made all the difference to see total strangers yell for you" said one of the runners. 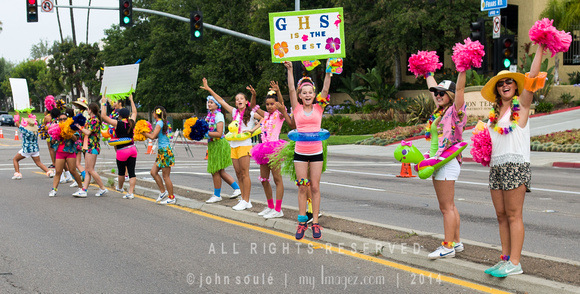 In addition to family, friends, and local supporters, there were organized "Cheer Zones" with cheering squads from local high schools positioned throughout the course who were competing in the Spirit of the Course Competition.  The energetic cheerleaders did their best to keep runner's spirits high every step of the way.  The Spirit on the Course Competition was awarded to the top three most spirited cheerleading squads based on their creativity, participation and enthusiasm. 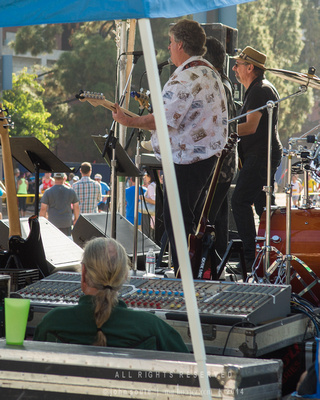 To support the "Rock 'n' Roll" theme, runners were greeted by either live rock bands or recorded music at every mile along the course.  More than 40 bands and 25 entertainment stages were positioned to add energy and spirit to the race. 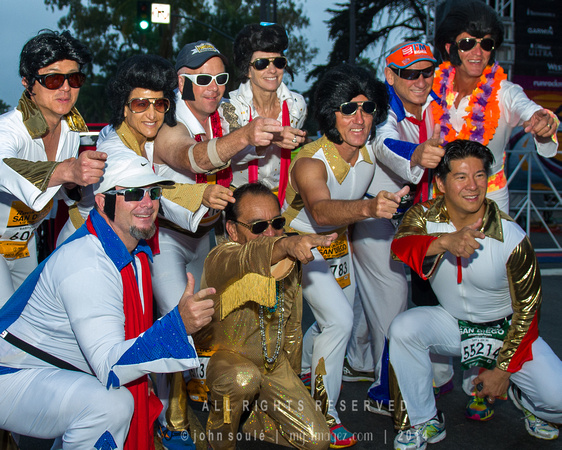 And what would be Rock 'n' Roll be without the presence of Elvis?   Or ten for that matter.  The Elvis "team" ran together in the half-marathon. 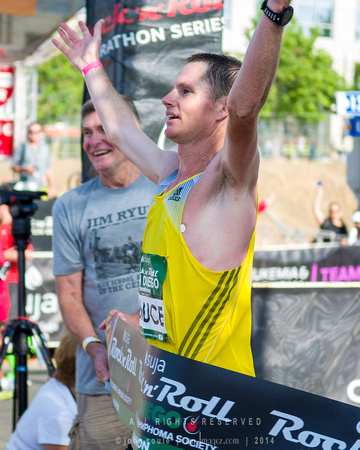 Ben Bruce had not competed in many marathons.  In fact this was only his second marathon, the first being run in New Orleans this past February.

The San Diego hometown boy, and Adidas-sponsored athlete, led from start to finish and was able to complete the 26.2 miles in just 2 hours, 23 minutes and 50 seconds. He had won in New Orleans in 2:21:56, but for the 31-year-old, nothing topped winning in his own hometown.

“It’s always good to win in my hometown,” said Bruce, who now lives and trains in Flagstaff, Arizona. 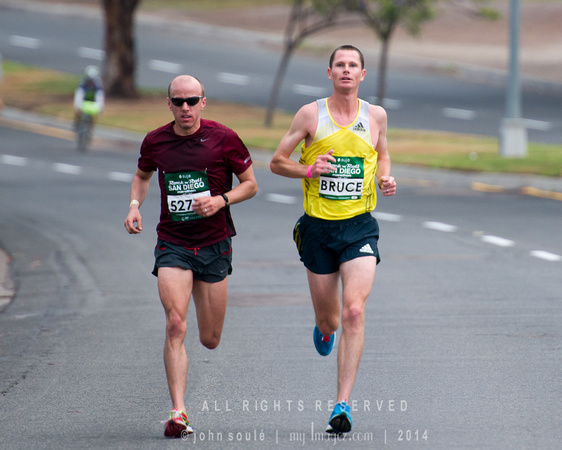 According to his coach, Bruce had set a personal goal to pace a 5:20 per mile.  As I sat by his coach in the Media Truck, I noticed that both Bruce and his coach kept a watchful eye on his time to see if he was maintaing a pace close to his target.

Bruce had a running companion, American 1-mile record holder Alan Webb, who paced Bruce through mile post 14.  Once Webb's part was complete, Instead of catching a ride in our Media Truck, he said he had a credit card with him was "going to catching a cab downtown to the finish line".

“That helped a lot because it gave me some company,” Bruce said. “It was good to have him there. It means a lot to have the American record holder come out and sacrifice himself. It says a lot about his character.”

“It was awesome,” Webb said after the race. “It’s fun to help somebody else. He did great and it was fun to be in the race environment, without the pressure of having to compete.”

The last half of the course had some challenges with elevations and increasing temperatures which impacted Bruce's pace time and became evident on his face as you could see the stress starting to take over.

Bruce, whose wife Stephanie is 38 weeks pregnant with their first child, said that he drew strength from thinking about the upcoming addition to his family.

“I thought about him a lot, my little boy on the way,” said Bruce at the finish line. “It got me through the last few miles when it hurt, I thought of him. The marathon takes a lot, they make you emotional.” 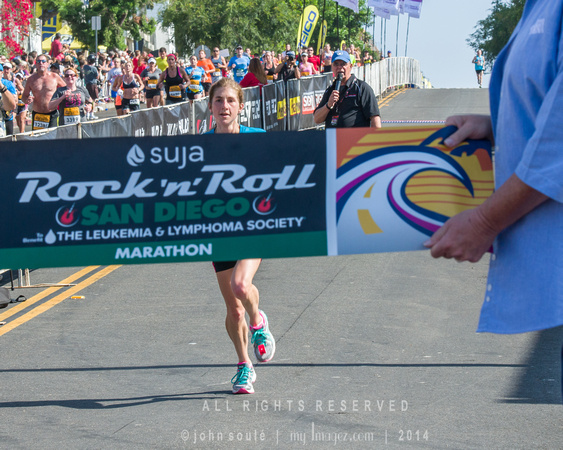 Anna Corrigan of Phoenix Arizona, ran this, her first marathon in just under 2 hours 45 minutes.  At 23, she was able to finish a full 3 minutes before second-place finisher Bonnie Axman, 29, of San Diego.

She stated that she had never run a marathon before and felt she could not have gotten through it without everyone cheering and hearing all of the bands along the course.

A recent illness slowed Corrigan''s training and forced her to readjust her goals heading into the race. All said, she was able to finish less than 90 seconds short of the U.S. Olympic Marathon Trials qualifying time of 2:43:00. 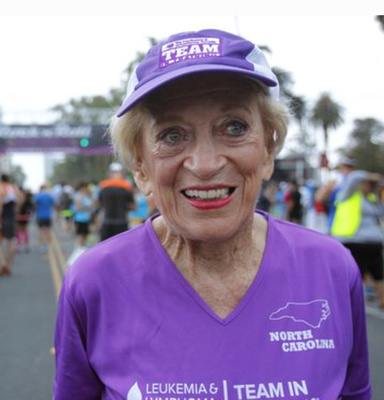 Ninety-one-year-old Harriette Thompson, from North Carolina, finished the marathon in 7:07:42. Thompson, who is a cancer survivor, became the second oldest marathon finisher in U.S. history and set a new age-group record.  This was her 15th time running this race.

“I’m having radiation on my legs. I just had nine radiation treatments, and they’re being healed now,” she said before the race.  The charity is close to her heart because everyone in her family had died from leukemia or some form of cancer.  Recently, she lost her 99-year-old brother to lymphoma, so keeping up her own health is one of her main motivations to run.  Thompson ran her first marathon when she was 76 after a friend from church had run as a fundraiser for charity. 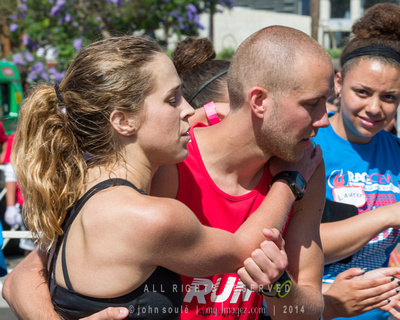 I can only assume Hess had rehearsed this moment time and time again in his mind.  As they crossed back over the finish line, Hess got down on one knee and proposed to Witte.  What a shocker - so cool.  Witte found a new burst of energy as she said "Yes!". 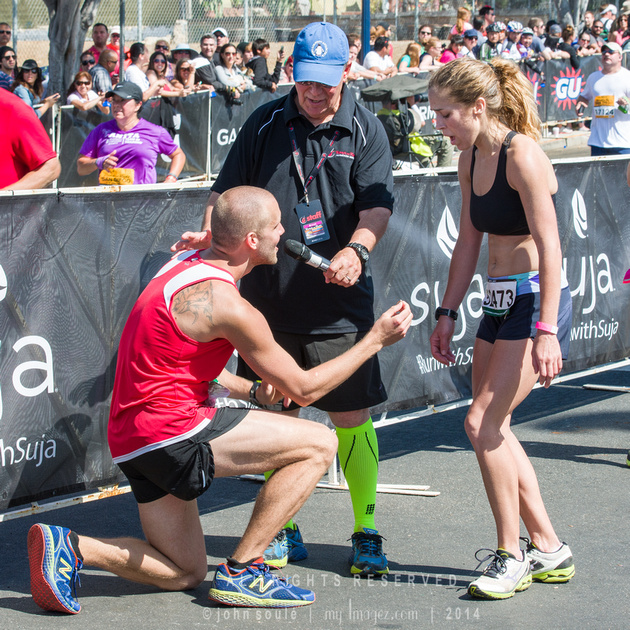 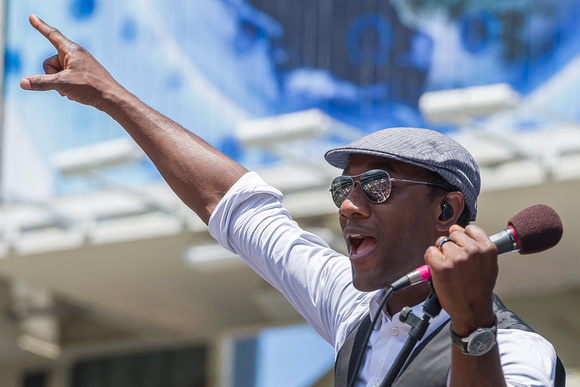 After completing the race, participants joined their friends and families to celebrate with a Finish Line Festival featuring headliner Aloe Blacc in concert at Petco Park.

This was my first marathon coverage and I was most impressed on how well this event was organized, considering there were over 30,000 entrants and thousands of spectators along the route.  I would like to especially thank Emily Gibbs of the Competitor Group for providing media access and use of the Media Truck to IPA for coverage of this event.  As I rode the entire course, I found that it to be amazing so many runners did so well - 26.2 miles is a lot longer than I had imagined.

Also a special acknowledgment goes out to Christina Scarlato, my daughter-in-law, who traveled from Washington DC to be in her first marathon and finished in the top 3% out of 2,245 Women.  As posted in PETCO PARK, "Marathoners - You Rock!" 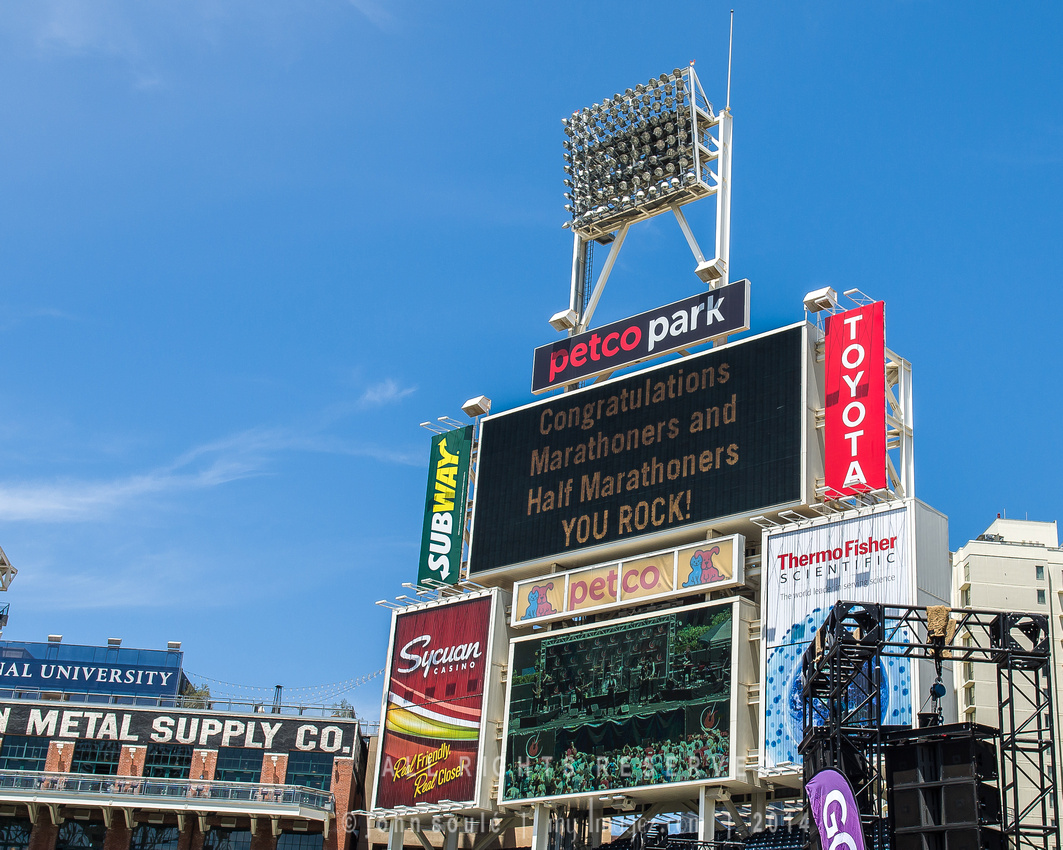