When my travel involves photography, it is either for relaxation (vacation) or a specific photoshoot.  When I travel for a vacation, my photographic needs are somewhat different and I want to carry the least amount of camera gear as possible - but yet still come back with some really nice photographs.  When I travel for a photoshoot, however, I want to bring as much camera gear as I may need to capture photographs for display.   A number of years ago, I moved into the full frame camera world and left my point-n-shoot and cropped sensor (DX) behind.  I now shoot with either a Nikon D810 or D4s.  Traveling with either of these professional camera bodies often requires bringing along a wide range of lenses – and thus a lot of weight and bulk to deal with.  The results are often worth the effort - if public display is your end game.  But what are alternatives?

The purpose of this article then, is to address those who have full frame cameras and would like some suggestions as to what to bring on excursions.  I should mention that there are some really good images out there taken from cellphones (but that is another topic altogether) and sometimes a point-n-shoot is the only way to go if you need something that is not to be so obvious (like at dinner). Addressing the pros and cons of point-n-shoot and cropped sensors (i.e. DX) cameras is a totally different discussion. 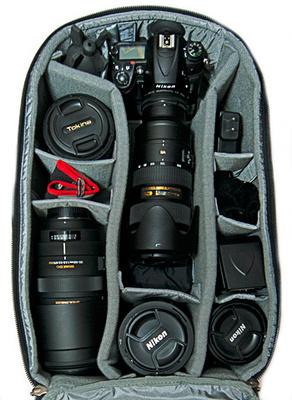 On a dedicated photoshoot where air travel is involved, I often carry a Think Tank Streetwalker HD backpack and a Think Tank Airport International carry-on.  Both bags are specially designed to carry photographic equipment and they get packed with little room to spare.  I pack into them two camera bodies/grips (Nikon D4s and Nikon D810), Nikon 14-24mm, 24-70mm and either 70-200mm or 80-400mm plus a number of filters, chargers, lens cleaners, a flash, remote shutter release, memory cards, tripod bullhead, MacBook Air and more.   I then pack into a rolling duffle bag, my full-sized Really Right Stuff Tripod, hiking gear and hiking clothes.  The rolling bag gets checked in and my other two bags (backpack and carry-on) come with me on the plane.  Since this type of travel is solely for photography, I make sure I take everything I may need with me.

For vacation when air travel is involved, I often carry one camera body (without the grip) and have to decide what lenses I should bring – often having to make compromises in my selections based on anticipated locations/subjects and available storage.   It really pays to plan a little in terms of photographic expectations.

I had used the Nikon 24-120mm f/4 (about $1300) on a recent trip overseas, and although many of the images were decent, I felt that the zoom range was limited which meant that there were some images I just could not capture.  As it happened, our vacation changed into a news story stemming from a Category 4 Hurricane disaster and followed by an evacuation.  Having just one lens was great for photojournalism which came in handy as I often found that I did not have the opportunity to change lenses to capture the action.  I did find that being limited by the reach of 120mm was limiting.

I should also mention that I often pack a Giottos Travel Tripod w/ballhead in my carry-on luggage for those times that require long exposures.

Looking at a variety of options from Nikon, as well as other vendors, I decided to try something a little different from what I had in the 24-120mm.  This time I decided to select a "general purpose" zoom lens that had a "reasonable" wide angle (less than 30mm) but had a reach to at least 250mm.  I also wanted to carry a light-weight, ultra-wide angle lens for the occasional wide-angle shot.  The wide-angle lens would need to be below 24mm and at least f/2.8 for sunsets, indoor and night shots.

After some research, I selected the Nikon prime 20mm, f/1.8 (great for low light and dramatic wide shots) to work with the Nikon 28-300mm, f/3.5-5.6 VRII (a "general" lens and telephoto).  The 28-300mm could cover most of my needs as a general purpose, walk-around lens and also provide the added reach when necessary.  And, on occasion, the 20mm could be easily switched out when I needed a very sharp wide-angle lens.  I now would have 20-300mm covered.  (I also have the larger 14mm-24mm which I find is somewhat sharper in the corners and more versatile than the 20mm - but is  beast to carry.)

I knew the 20mm lens should give very reasonably results based on reviews but the 28-300mm had very mixed reviews and was of concern.  Although having just two lenses covering 20-300mm could be the answer I was looking for, I was concerned whether the image quality was going to be there.  The potential space savings in packing I knew was going to be a real plus.  I could now pack my D810 without the battery grip plus add the 20mm lens, 28-300mm lens, filters, memory cards, Black Rapid Strap, GoPro and still have room in my Think Tank Shoulder Bag.  There was no need for a large backpack and the dedicated camera carry-on.  I could actually take my regular carry-on and pack clothes in it.

And, if this combination did not perform as expected – back they could go for a refund on my credit card.  By-the-way, this combination set me back $800 for the 20mm and $1046 for the 28-300mm for a total of $1846 – about $500 more than the 24-120mm f/4 I had tried before.  Could I have purchased a point-n-shoot for less? - of course.  But not one with 36megapixels and with the kind of potential image quality this setup could have.  But a few tests were in order to determine if this was a go or not.

Before our trip, I conducted a series of calibration tests to fine tune each lens in terms of back focus and front focus for each of my camera bodies.  (I used both LensAlign and Focal).  I also conducted a number of sample field tests and pixel peeped at 100% to determine if the resolution was acceptable for prints up to 8x10 for each lens.  After all, what good is a lens if the images are not good enough to show anyone.  After conducting calibration tests to fine tune my camera/lens and viewing comparisons with my reference lenses (14-24, 24-70 and 70-200), I felt that my proposed combinations were worth a go - and off we went.

I can say carrying this equipment was no problem.  Also, in that the 20mm and 28-300mm both take 77mm filters, I could now limit the amount of filters to carry (Circular Polarizer, Neutral Density, and Graduated Neutral Density).   And, just knowing I had a wide coverage (20mm~250mm) within easy reach was wonderful. (I say ~250 because I would never extend the 28-300mm all the way to 300mm). 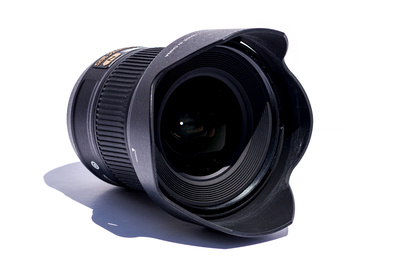 In using the 20mm, I found that lens was sharp and results were comparable to my 14-24mm at 20mm.  Any minimal distortion was easily corrected in Light Room.   I appreciated the light weight (but honestly seemed like a toy at times) and the fact it took 77mm filters.  I did not get a chance to shoot any night sky but was able to get some really nice sunset shots.  The lens is small enough that it can fit in a jacket pocket (or small camera bag.)  It also worked well indoors. 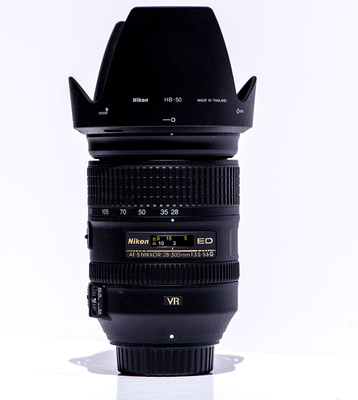 In shooting with the 28-300mm, I found the VR worked well and was fast.  There was some image quality inconsistency during testing when action was involved so I often shot in bursts of 3 or more if the subject was moving.  It also produced some Chromatic Aberration that was corrected 'for the most part' by Light Room. I never extended this lens to 300mm, but rather backed down to around 250mm.  At 300mm I found the 28-300mm to be too soft for my taste but was quite acceptable up to 250mm.  This additional reach was a big plus over the 24-120mm that I had tried before.  And, on a D810 capturing 36megapixels images, I knew I could crop in even more as needed.

Since most of my daytime photographs are shot at f/5.6 – f/8, the limiting f/value inherit to the 28-300mm lens (3.5-5.6) was never an issue.  And, with the low-light handling capabilities of the D810, I knew I could bump up my ISO if necessary when ample light was not available.  Overall, I was pleased with the performance of this lens but I knew I would not use it for any professional work that would be enlarged over 16”x24” as I often do.  For albums and the web – this seemed perfect.

The 20mm f/1.8 prime is a very nice, low-cost lens.  Being a prime lens, it is very sharp and is a welcomed addition to my collection.  I look forward to trying it out for astrophotography in the future.  For the majority of my professional work, however, I will most likely stick to my 14-24mm for the capability of zoom and the 14mm dramatic effect.  That is, when the added bulk is not an issue when transporting this lens.  Still, only needing one set of filters is quite appealing on the 20mm.  The filters for the 14-24mm are huge!

The 28-300 makes a great ‘one lens’ choice – especially when changing lenses is either not possible or when the time needed to change lenses can mean missing a shot.  To me this lens is of consumer grade quality and does not come up to the standards of the professional lenses I normally carry (nor at the much, much higher price tags).  But for a vacation and some photojournalism - the 28-300mm is more than adequate.  When on vacation or in situation when it is not practical to have multiple camera bodies or lens changes (such as in a vehicle, on a plane, at an event), the 28-300mm along with the occasional switch to the 20mm prime works very well.  For me this may be the best overall compromise for a full frame Nikon camera when getting the shot matters, images are not going to be displayed over 16"x24" and when transporting the least amount of equipment is of concern.

For most professional work, I will still carry two camera bodies – one using either the 14-24mm for really wide shots or 24-70mm for general purpose. The other camera body will use either a 70-200 or 80-400mm for tight shots. Your experiences may vary.  Just my 2 cents worth. 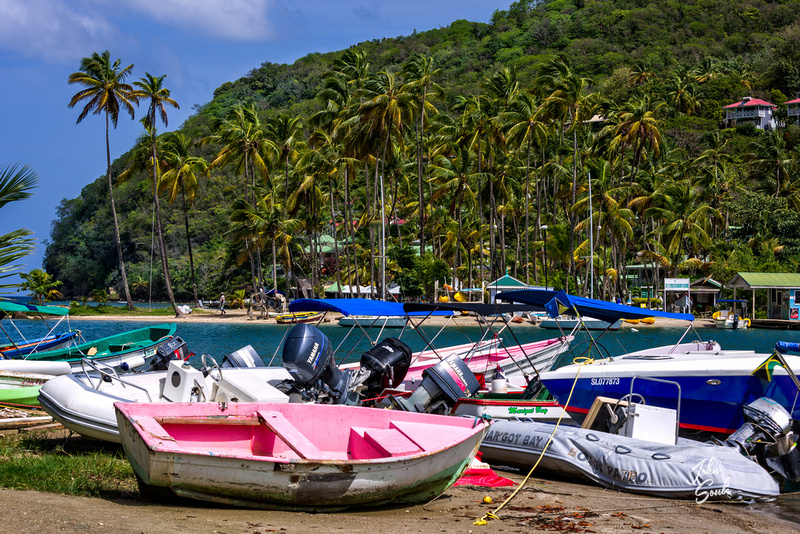 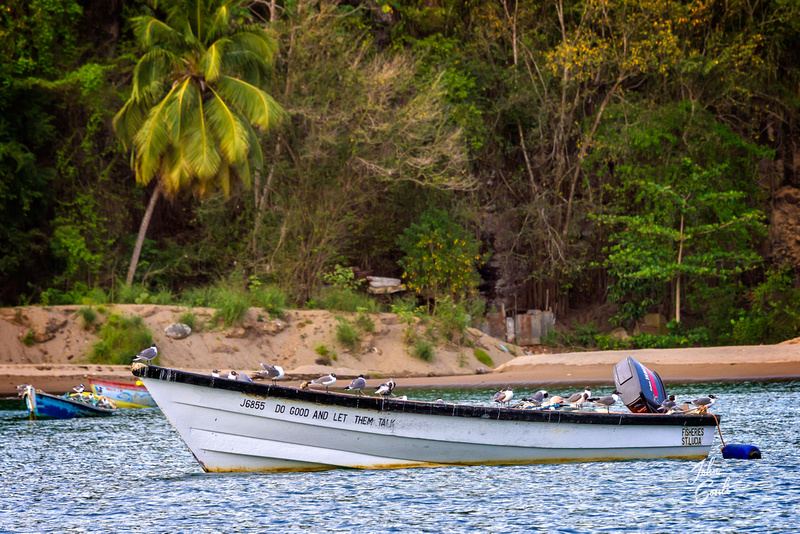 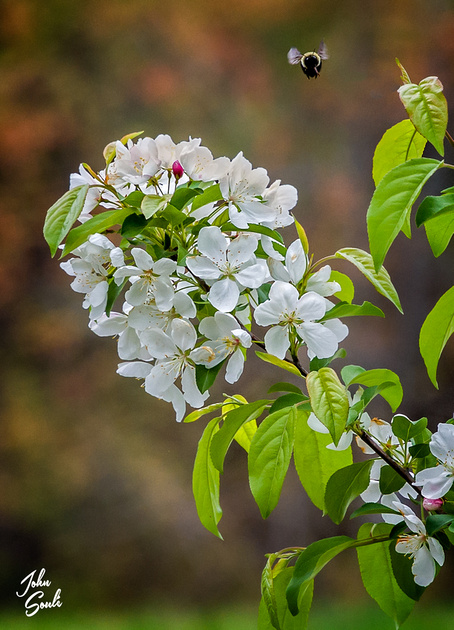 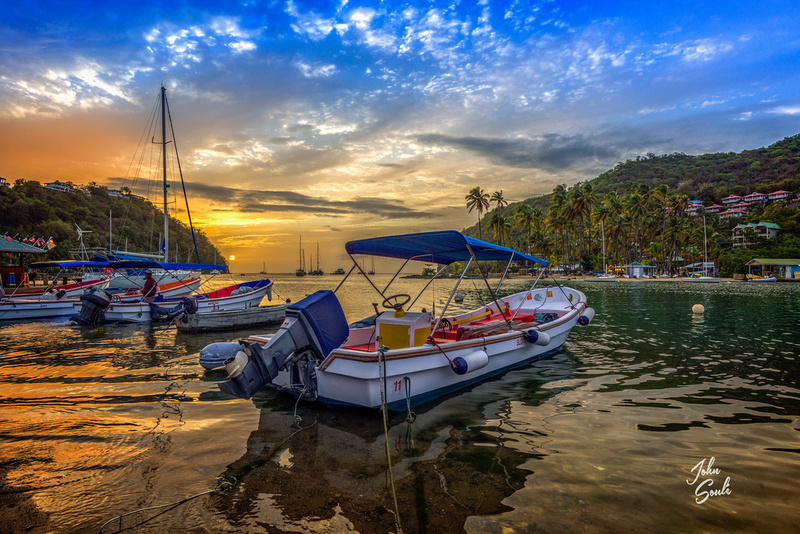 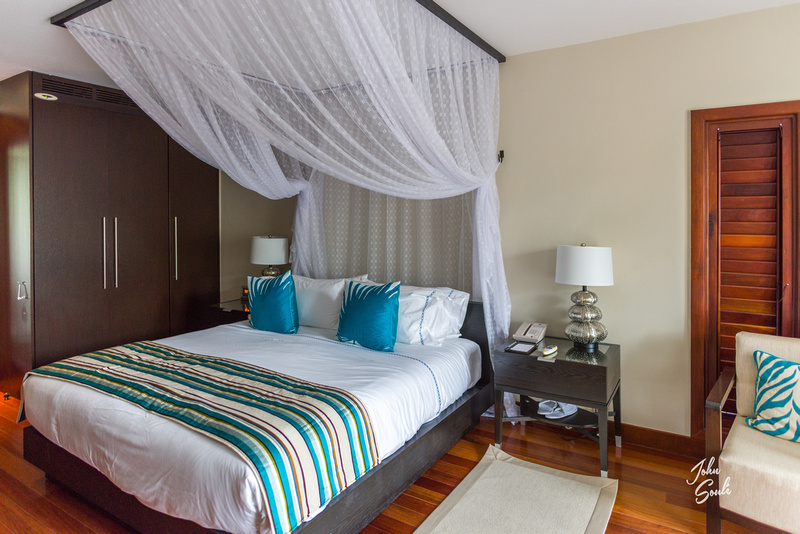 The following were shot during the Baltimore Riot using the Nikon 28-300mm.  There was no time to change lenses. 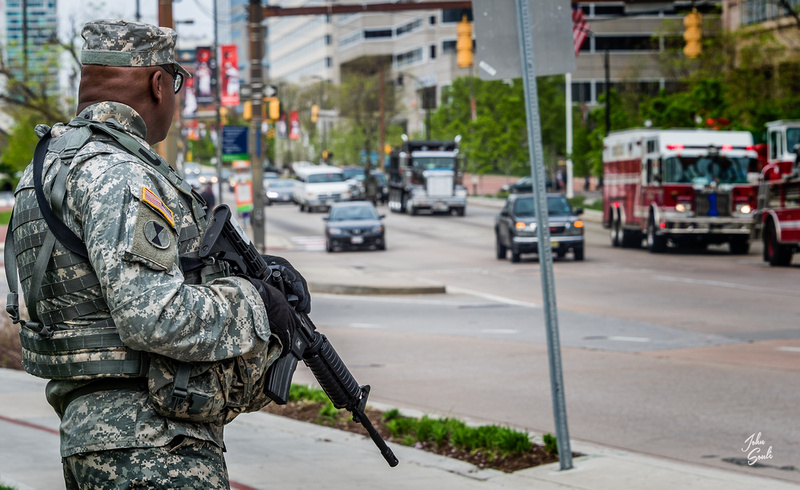 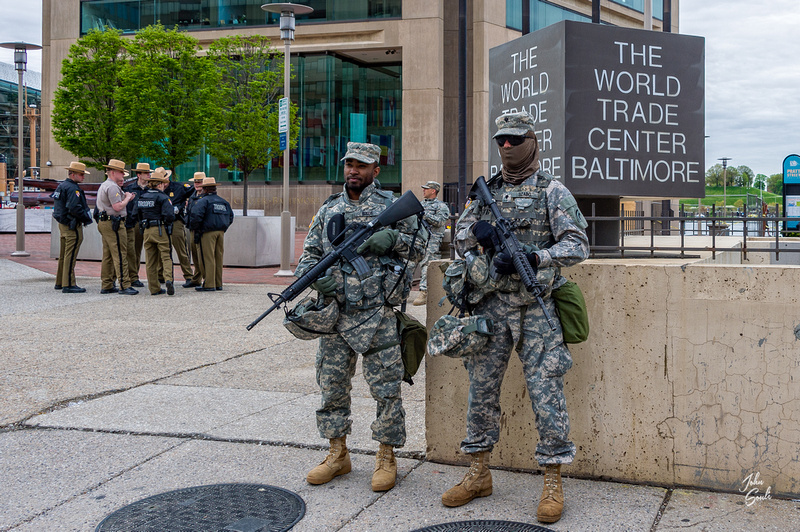 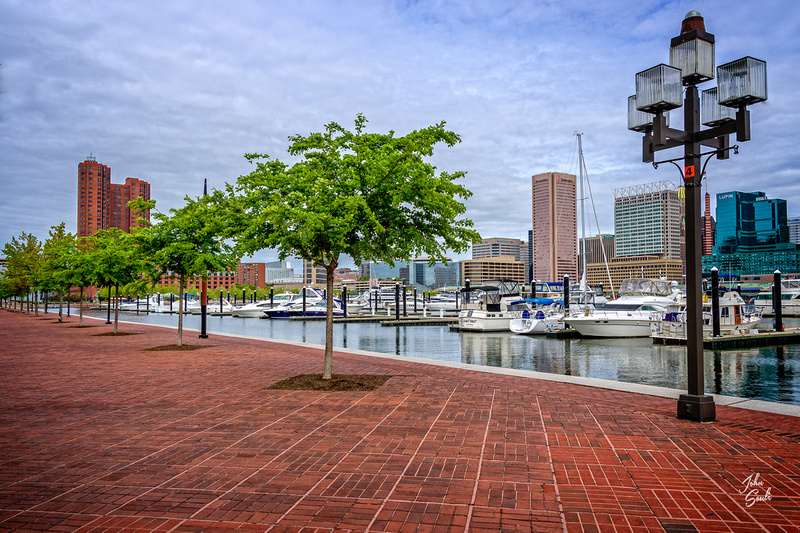 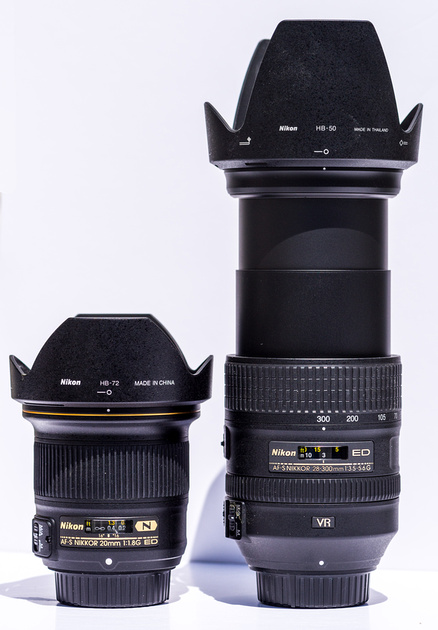