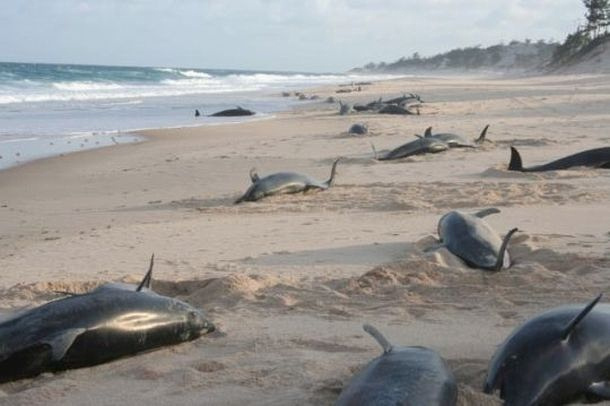 Of the 600,000 dolphins world-wide, over 20,000 generally migrate through the mid-Atlantic coastal waters during the summer and fall.  However, a silent, mysterious plague is claiming the lives of these bottlenose dolphin in record numbers.

Since July 2013, nearly 1,400 dolphin carcasses have washed onto the shores from New York to North Carolina – a number roughly ten times what is normal. And, scientists do not know exactly how many have died in the ocean and not washed up onto the mid-Atlantic beaches.  The actual number could be in the thousands. (The average death toll for dolphins should only be a few hundred per year.)

In July, the National Oceanic and Atmospheric Administration (NOAA) declared the die-off an Unusual Mortality Event which freed up federal funding for investigators to address the crisis.  The NOAA team began investigating the event along with the assistance from the National Aquarium in Baltimore and state aquariums throughout the Mid-Atlantic. 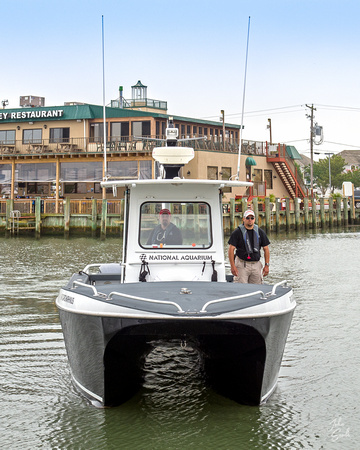 In 2013, 113 dolphin sightings were recorded off the shore near Ocean City Maryland.  In 2014, only 53 dolphins were recorded.  Heavy fog and a lower dolphin population may have contributed to the lower count.  No dolphins were sighted from the research vessel.

The Cause – A Deadly Virus 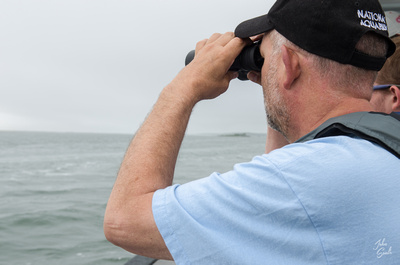 Brent Whitaker from the National Aquarium searches for dolphins

NOAA believes the source of the dolphin deaths is “Morbilliviruses”, an RNA virus. Morbilliviruses are responsible for measles in humans, rinderpest in cattle, and canine distemper in dogs, coyotes, wolves and seals.

Morbilliviruses are usually spread through inhalation or contact between animals, including mothers and calves, according to NOAA. Animals can also be exposed to the virus through the eyes, mouth, stomach, skin wounds and the urogenital tract. 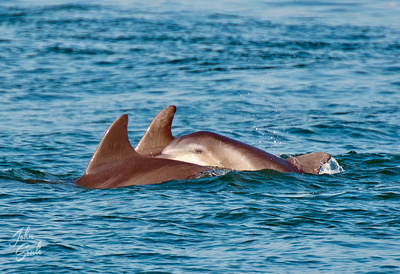 Dolphin PodImages shot at both National Aquarium in Baltimore, MD and on location off the Atlantic Ocean.

Dolphins are highly social creatures - they even breathe together.  As a group, dolphins may come to the surface, issue a forceful exhalation through their blowholes and then all inhale, sharing aerosolized particles expelled from adjacent dolphins.  Sex, nursing and playing also lead to direct contact.  Moreover, small groups are continually striking off on their own, forming new groups, and latching onto other groups, thereby repeatedly introducing diseases into new communities.

Since viruses continually mutate, swapping and rearranging genes, the explosion of the virus could just be nature at work.  Without additional information, some researchers worry the number of deaths will continue to escalate.

Due to some secondary infections, researchers are wondering if humans are a contributing factor - specifically whether poor environmental conditions fueled by agricultural runoff and other human activities made dolphins unable to weather the diseases.

Scientists don’t know for sure what sparked the outbreak, but are guessing that affected dolphin populations have lost their ability to fight the virus, an immunity they gained 25 years ago when the virus last struck. 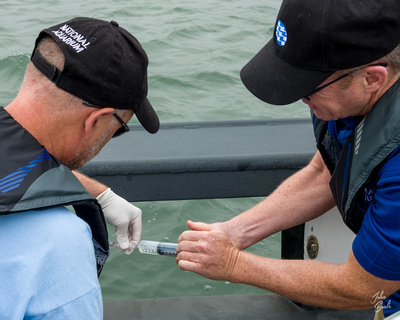 And, though it is spreading, there’s no way to vaccinate dolphins against the spread of the virus.

According to Brent Whitaker of the National Aquarium, the virus “has to burn itself out.  Animals have to be exposed and survive from it - and become immune to it."  He stated that  " We see events like this periodically…every 10 years or so…and what we think that is happening is - you see it, you survive it, you’ve got immunity to it, you’re good – you’ve lived your life and now the youngsters are coming up - they’re naïve to it. The virus hits again and the naïve animals get sick … And that is the majority of the population at that point.  …There are always survivors – some have immunity.”

Although scientists have no treatment for infected dolphins, they want to track the deaths and identify their causes since dolphins help serve as a barometer of ocean health. 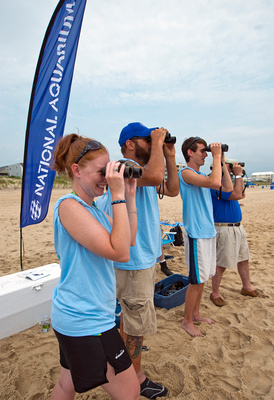 The National Aquarium’s annual dolphin count helps marine mammal specialists capture a snapshot look at dolphin populations, reproduction rates and ocean health on an ongoing basis.  Looking at the population numbers over the years can help to determine the health of the coastal ecosystem as well as the abundance of prey.

The high death count and presence of secondary infections has led some researchers to suspect a wider problem—namely, a coastal ecosystem possibly sickened by human activity.  Environmental degradation might be amplifying the effects of a measles-like virus, fueling infections that are propelling the alarming death count.

Overall, the experts pointed out that the dead dolphins may be an alert to troubles in our oceans - an ominous sign of a larger, ailing coastal ecosystem and the die-off may be reflecting the negative effects lower in the food chain.  If tiny prey organisms are getting sickened and fish eat them, and the dolphins consume the fish, the bioaccumulation of toxins might be serious.

Other factors may have weakened the dolphins' immune systems, making them more vulnerable to sickness. They include chemicals, other disease-causing microbes, biotoxins and expansion of the dolphins' range, according to officials and experts. Most of the East Coast dolphin deaths have occurred in areas with heavy human footprints, like the Chesapeake Bay.

According to NOAA, the virus cannot be transmitted to humans and no cases of human illness have been reported from this dolphin disease outbreak.

However, it is recommended by NOAA that people should not swim with open wounds in the immediate area where a stranded animal is found.  It is unclear if people could get any infectious diseases by touching the sick dolphins, but people and dolphins do share a vulnerability to disease-causing microbes.

NOAA also recommends that people should keep pets away from marine mammals, especially stranded ones.

About the National Aquarium in Baltimore

National Aquarium’s Animal Rescue Program is a member of the Northeast Stranding Network (NERS) through the National Oceanic and Atmospheric Administration (NOAA). The Aquarium is one facility among a network of nationally recognized facilities that work cooperatively to respond to stranded marine mammals and sea turtles.

The Animal Rescue team works directly with NOAA, USFWS, Maryland Department of Natural Resources and regional and national stranding partners to respond to stranded animals and collect data used to better understand aquatic animals that are still very much a mystery to modern science.