How to Photograph: Seascapes

I have been asked the question about how photographers get those 'special' seascape shots that stand above the others and get noticed.  I always state that art is subjective and what one person may like another may not.  The purpose of this "how to' article is to give a quick overview of the 'when, what and how' of seascape photography and explain a few techniques that I have used that you may be of interest.

A number of factors play an important role in getting that right shot and timing (the when) is first on my list. For seascapes I consider three factors when it comes to timing: Time of Day; Tide; Weather.  Let's look at all three.

Although you can take shots of water any time of day, lighting is an important factor for any photography - especially when you have water and sand involved creating high contrast scenarios.  I generally restrict most of my seascape work to sunrise and sunset - especially around the 'Golden Hour' when the sun is low on the horizon and colors just seem to pop out all around.  The opening photograph was taken a few minutes after sunrise and sunlight was just starting to highlight the jetty (rocks).  Just an hour later, the colors would be gone and the delicate features of the rocks would be all but flattened by the harsh sun's rays.  Within a hour after sunrise, my shooting is complete.

It is helpful to find out when the tide will be high and low and what that would do to the subjects.  Low tides can often yield interesting pools of standing water, and if rocks are nearby, be a great source for reflections.  Depending on the location, you may find some sea creatures that can make great subjects (starfish, shells, sand dollars, etc.)  A high tide, as was the case in the opening photograph, can add impact as the water rushes over exposed rocks and, and with the proper photographic technique (discussed later), can be 'smoothed' out for a wonderfully soft, almost painting-like effect (all done without post-processing). 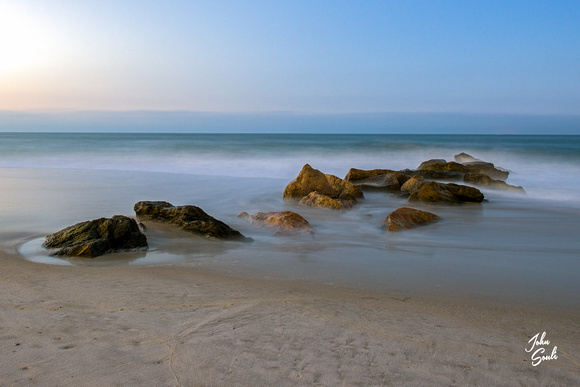 From blue skies to storm clouds, the sky can make a big difference as to whether an image has impact.  If the sky is a beautiful blue with no clouds, the image often becomes a bit boring to some - the water, however, will reflect that blue and produce some wonderful color.  This was the case for the opening image and as seen to the right. If I were to leave the crop as taken, my subject (the rocks) would not be quite as dramatic as I wanted it to be - compare the opening image.  In cases such as this, I find it better to crop lower to the horizon and focus the viewer's attention to a specific point of interest. (Here the angle of the rocks draws the viewer's eye from the lower left to the upper right.) 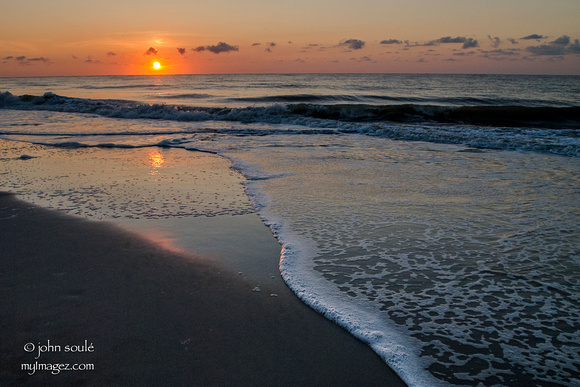 If the sky is somewhat boring, use more of the water/beach in your overall capture. 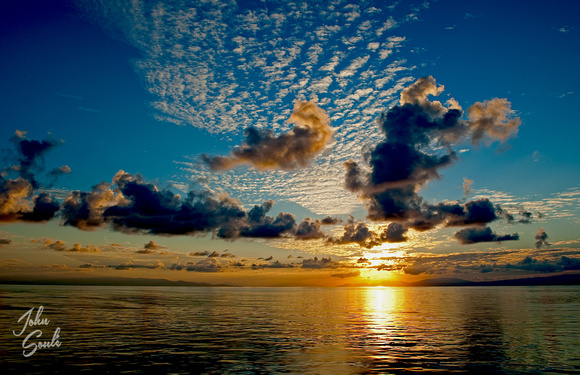 If the sky is dramatic, capture more of the wonderful structure and colors in your image.

When it comes to seascape images, there can be much more for the photographer than just the obvious - sand, water and sky.  Photographs can become more interesting if there are other objects of interest in the capture.  Such items as rocks, shells, weeds, driftwood and even a structure (lighthouse) can add to the image.  Quite often it pays to 'scope out' the area you are going to shoot well ahead of time.  This often either means looking at other photographs from that area on the internet, including Google Earth for rock formations near the shooting location, or being at the shooting location at least an hour before the shoot to determine the best Point of View and find any available subjects.  This step can often make the difference between a seascape photograph that sells and a point-n-shoot snapshot. 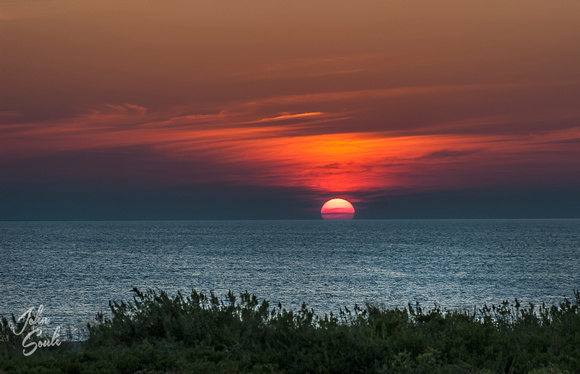 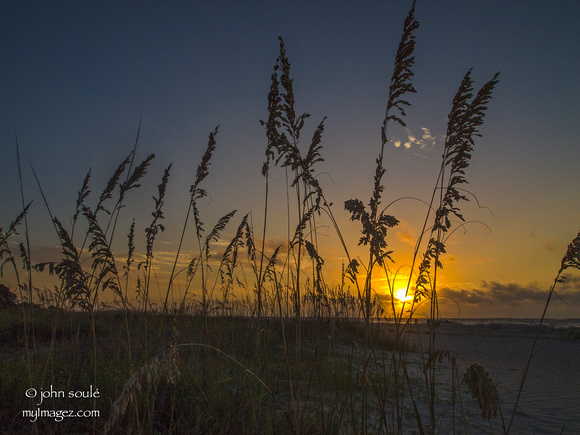 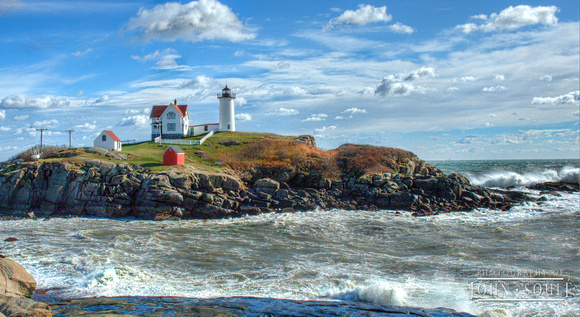 Images captured following a storm can be dramatic such as this one taken the day after a nor'easter hit the Maine coastline.

Once I have made my plans as to when and where to shot a seascape, it becomes a matter of 'how' and what techniques can be used to make the images stand out.

Here again, I start off with lighting as a key concern.  For beach/seascape photography, the mid-day sun can be very harsh and reflections off the water and sand can make images very contrasty and, unless you are shooting black and white, difficult to work with.  As stated before, I prefer shooting at sunrise or sunset. 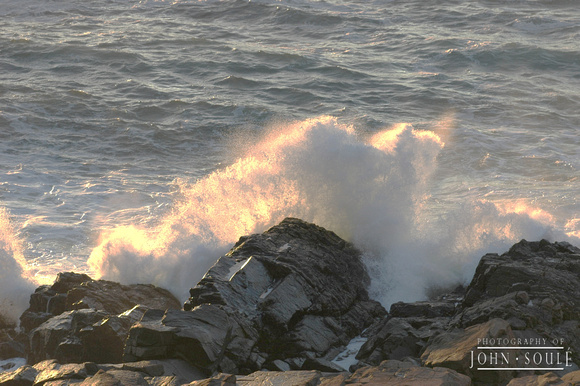 Waves can easily get blown out in terms of exposure.  If shooting towards the sun, I try to catch the sun's rays behind the wave rather than in front.  If shooting with the sun high in the sky, the contrast between the white foam of the curl of a wave can be high compared to the water and often is shot overexposed by most meters using 'matrix' metering.  (Center or spot metering can help with that some.)

Whether to freeze the water as in the shot above or smooth out the water in an almost mystic capture is truly a matter of artist taste.  For me, it depends on what I am trying to achieve.  As in the photograph above, stop motion was the effect I was going after.  However, in the opening image, I wanted to capture a combination of a crisp waterline plus the smoothing effect around the rocks.  If water is moving, and the exposure is slower than 1/60th of a second, the water will be blurred.  But how much is should it be blurred for the effect to pleasing?

The image to the right was made at f/16, ISO 100 and a shutter speed of 1/10th of a second to give just a touch of blurred action by the waves breaking while keeping the waterline sharp.  The waterline I noted stayed in the flat area of the beach for a little over a second before disappearing.  Staying in the same position for longer than my shutter was open would mean that that area should remain crisp. The breaking waves, however, were moving much more quickly and should be blurred, showing motion in the capture.  This result worked as planed.

Here again, the line between what is pleasing to some and what is not, becomes a matter of artist taste.

In the opening image, (and I should mention that all the shots here were take using a tripod and cable release), I wanted the best of both worlds.  I know that the waterline would remain in position for about 1 second on the flat area around the rocks.  As above, this would yield a sharp image and possibly some reflections.  The waves were constantly in motion and I wanted to really slow down their motion a lot.  For next shot, I set my aperture to f/16 (wanting a good range to be in focus) and my ISO to 100 to keep noise low.  This setup would also force my shutter speed to be slow.  The sun was just starting to light up the rocks.  I took a reading on the rocks and water.  I set my shutter speed to 30seconds. (Turned Active- D-Lighting 'on' (for you Nikon buffs) to bring out shadow detail.)  I took a sample 30-second exposure.

I needed more.  As the sun was making the area even brighter, I added a Lee 10-stop filter plus a Singh-Ray 3-stop Reverse Graduate Filter (evens out horizon brightness) to slow the shutter speed down even more.

I also decided to convert the shot to Black and White for a bit of a dramatic effect.  To the right, the image was shot at f/16, ISO100 using the 10-stop Neutral Density filter. The shutter speed was now at a full 4 minutes.

(One of the other benefits to using a long exposure is that if a bird or person were to go through the image, they would not be captured as long as they kept moving.  That can be very useful in crowed locations.)  Note the water motion is completely gone and only a mist covers the area.

I should note that, in addition to the Neutral Density and Graduated Filters that I have mentioned, using a Circular Polarizng Filter can be very useful in controlling reflections and enhancing colors.

I always try keep my eyes open and be prepared - I never know what I may find while at the beach.

So - there you have it, a quick overview of the 'when, what and how' of seascape photography and some of the techniques I use.   I hope you will find some of this helpful as the summer is now in full swing in the Northern Hemisphere and folks are heading to the beach. Most of us in the US have really had enough winter this year. 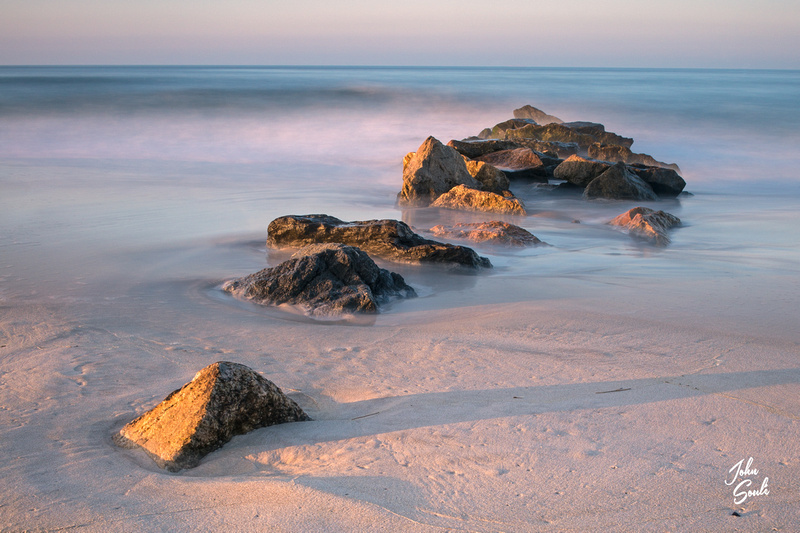