Moments of Terror - The Mall In Columbia Shooting

All too often we hear about senseless shootings in malls in America and around the world.  You never think it could happen to you.  This article is about a recent mall shooting and the firsthand experiences of the writer as a witness to moments of terror.  This is just one viewpoint, mine.

Columbia, Maryland is a planned community comprised of ten self-contained villages, located in Howard County, Maryland, United States. According to James Rouse, developer: "It began with the idea that a city could enhance its resident quality of life with its lakes, parks and wooded areas.  It was developed in terms of human values, rather than merely economics and engineering. Opened in 1967, Columbia was intended to not only eliminate the inconveniences of then-current subdivision design, but also eliminate racial, religious, and class segregation."  It features a Town Center and Shopping Mall.

The Mall in Columbia, is a large regional shopping mall with two levels and five anchor department stores (Nordstrom, Lord & Taylor, Sears, Macy's, and JCPenney), a multiplex movie theater, and more than 200 stores and restaurants.  At one end of the Food Court there is a children's playground on the lower level and a carousel at the other on the upper level.   Since 2006, Money Magazine has listed Columbia as one of the top eight best places to live in the United States. 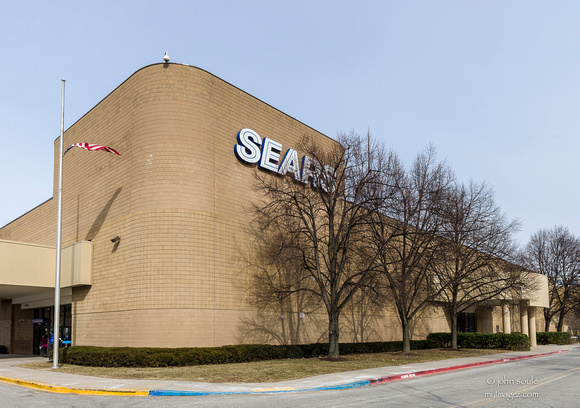 It was Saturday, January 25th. It was a bitterly cold, overcast morning.  A great day to go to the mall and spend some time shopping.  My wife and I arrived around 10:20am - shortly after it opened.  There were very few cars in the parking lot at this early hour.  We parked in the garage and walked together to a store on the upper level before deciding to part ways and meet later - around 12:00pm.

It was now just before 11am so I decided to head down to the lower level to the Food Court for an early lunch.  The Food Court had just opened and there were just a few people passing through, getting food or just sitting at the open table area and relaxing – there seemed to be less than 50 people or so actually seated. To my delight, I had never seen so many tables unoccupied down there.  What I didn’t know was that in about 15 minutes, events would unfold that would bring terror to this peaceful environment.

What I also did not know was that a young man had arrived a bit earlier and was sitting somewhere down there with a 12-gauge shotgun, a bag of ammunition and several homemade explosive devices. 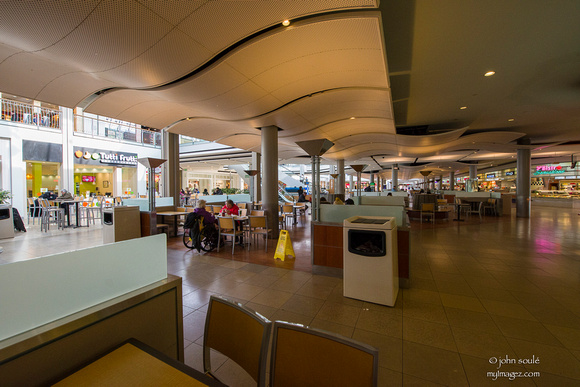 As I was eating lunch, I pulled out my cellphone and starting going through emails.

It was now 11:15am and a very loud “bang” echoed through the Food Court.   As the sound resounded off the tile floor, I could not tell exactly where it had come from.  It reminded me of an extension ladder falling to the hard floor.

There were a few screams, but for many of us, this just sounded like a loud noise in a construction area and people continued about their business - although curious.

After about 20 seconds there was another loud bang, bang, bang,…bang! Some people starting ducking under their tables in panic, while others were rushing for whatever protection they could find in a crouched position. Their curiosity had now turned to panic and self-preservation.  It then became silent - no one talked, just listened.  The moment had turned surreal.

I could see a group of young men had barricaded themselves with chairs under their table behind me.   Food was scattered all around the floor.  Beside me, a couple was lying face down on the ground. I was now on one knee trying to see where the shooter was.  Was the best action to remain down under the table? Tables are not much of a hiding place.  If I move, would I now become the target?

I could not see anything from my vantage point.  A woman was crouching beside me and said her daughter was in the theater on the other side of the mall and didn’t know if she could reach her by phone.  I looked down at my hand and realized I was still holding my cellphone.  My mind was racing and I tried to call my wife but continually dialed the wrong number as my hand was shaking.

About one minute had now passed - but it seemed like a lifetime as everything was in slow motion.  Was there one shooter? Was this a gang fight? I could smell the sulfur from gunfire in the air.  I could see stores were shutting off their lights and bringing down their gates as they had been trained to do in situations like this.  I later learned that one woman had been shot in the foot outside the store and that the shooter had turned and fired down into the Food Court spraying a wall with buckshot.

I had now counted six shots.  The shots seemed to be too loud to be from a small caliber weapon - more like blasts from a rifle, a big rifle.  After each shot had been fired the screams intensified.  Then there was a sudden movement of people coming away from the escalator located at the center of the Food Court.  I still could not determine if the shots were on my level or the one above me.  Was he upstairs coming down?

There was a pause - more silence. 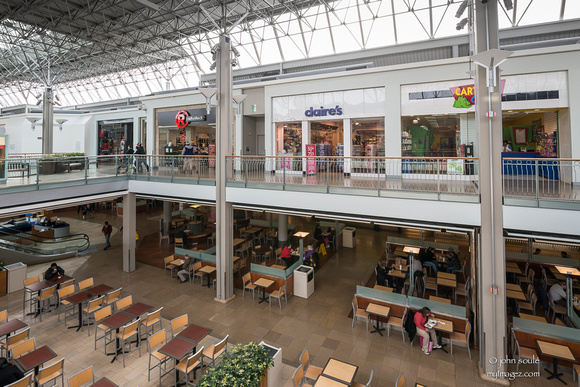 The white walled area to there right of the frame (upper floor) is shooter's location.

Then a seventh shot rang out, but was somewhat muffled compared to the others.  It seemed as though the shot was now further away.  I took my chance with some of the others and quickly moved toward Sears that was still open behind me.  As I entered the doorway I heard another muffled shot. This was number eight and turned out to be the last shot I would hear.

As I approached the exit to the parking lot, I finally was able to make contact with my wife on the phone.  She was ok and told me to meet her at our car.

The time was now 11:17am according to my cellphone.  This terror had only lasted 2 minutes.

About twenty of us got out of the Food Court and made it into the parking lot as the police had already started to arrive.  A number of people had remained behind under their tables.  Some of the stores had back exits to the parking lot – one of which my wife was able to exit through. Many other shoppers decided to remain hidden in their Shelter In Place - some for as much as 1-1/2 hours. As I was walking through the parking lot I could hear the sound of a store alarm going off.  Groups of people were clustered here and there outside some of the stores.

Many people had left their packages and other belongings behind in their panic and had to face the bitter cold weather. I saw many faces of disoriented people who did not know where they had parked or what to do as they made their way across the frozen pavement. 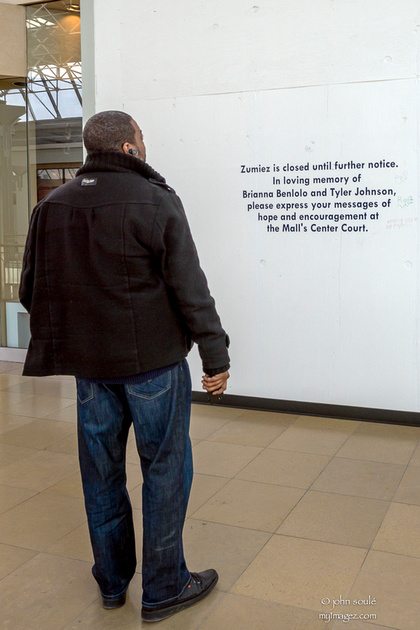 In the end, tragically, two young employees of Zumiez, (Brianna Benlolo, 21 and Tyler Johnson, 25), had lost their lives in their store located near the top of the Food Court escalator.  One person on the upper level had been shot in the foot, several people had received injuries as the result of the panic and the shooter, (Darion Marcus Aguilar, 19), had taken his own life.

(We also learned that the weapon used was a Mossberg 500 pump-action shotgun that holds 6 rounds.  I have to assume the pause after the sixth shot I heard was the shooter reloading.)

When I met up with my wife, police cars were streaming toward the mall.  My level-headed wife had spent many years as an ER Nurse and part of her reaction to these events was to try to help some of the panicked people around her.  She even brought one disoriented person back to our car to help her find own car.  We both realized how lucky we had been.

There was much coverage about this event online and in the news. Again, the purpose for this article was not to rehash the horrific details of the shootings but to help provide some insight from my own personal experience. 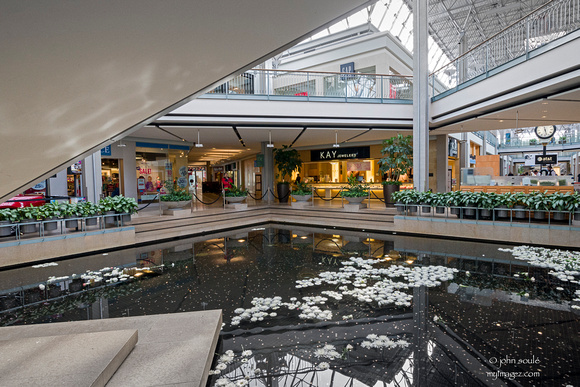 Although we still do not know the motive for this attack and for that matter, may never know…we do know two things: our hearts go out to the families and loved ones that were part of this senseless act; and our lives will never be quite the same again.  I still can hear the gunfire and at times replay the scene in mind.  I am sure many others do as well that were there.

The mall was closed from Saturday until Monday to allow for the investigation and cleanup.

Seeking closure, I returned on Tuesday to take the pictures for this article.  When I arrived I saw that the flags around the mall had been lowered to half-staff.

I parked and walked to the door at Sears that I had used to exit that Saturday morning.

I then took the short walk to the Food Court and revisited where I was sitting.  For a moment I could still hear the sounds of gunfire in my mind. I looked up at the escalator that was about three stores from where I was sitting.  As I rode the escalator to the second floor, I could see where once was a skateboard store, now had been boarded over.  A printed message was in the center in remembrance of Brianna and Tyler.  As I got closer I could see personal handwritten messages on the board as well.  I walked to the center of the mall. 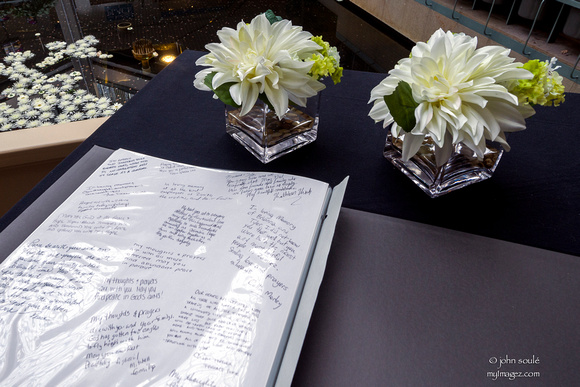 White flowers were now floating in the reflecting pool and two books were out for people to write their personal messages of condolences. The mall seemed very, very quiet.

I walked back to the Food Court and looked at the patched wall where a shot had hit.

I reflected for a moment as I looked back up to the boarded-up skateboard store where the shooter had been standing.

I walked outside through the entrance that the shooter had come through.  A sign with "Forever In Our Hearts" was attached to a railing. Spread around were flowers, stuffed animals, candles and there was a photograph of Brianna.  As my eyes watered, I said goodbye to two people I never knew. 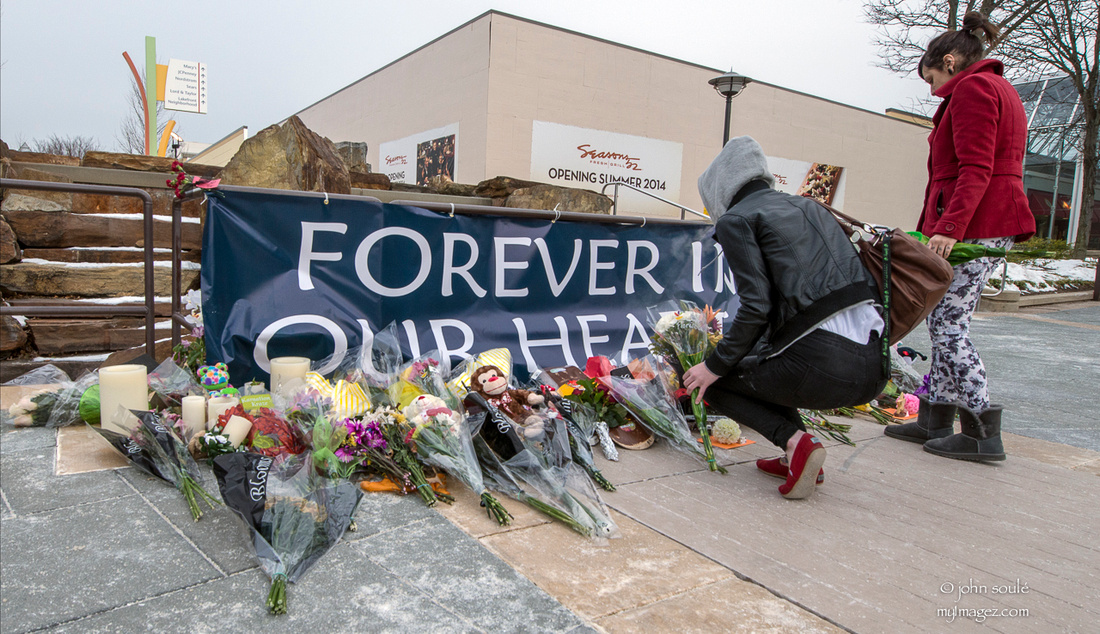 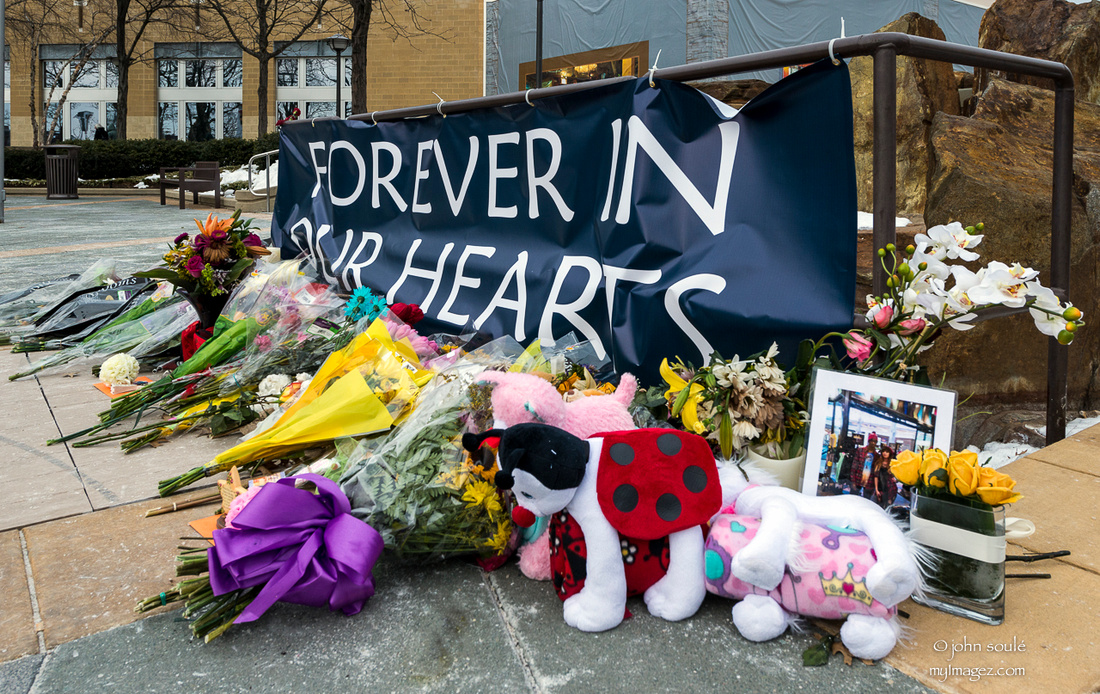