How to photograph: Through an Airplane Window

Photo opportunities that are often overlooked by air travelers are those that can be taken through an airplane’s window.  Often when travelers make an attempt at this special form of photography they become dissatisfied with their results.  I have been asked on numerous occasions 'How did you get that shot?'  I must admit that shooting through an airplane window can be a challenge.

The purpose of this article is to provide a few tips to help with that challenge so you can take pictures such as the award wining one shown above of the Alps at sunrise.  Although the Nikon D7000 camera is a great choice for shooting these images, these tips can be applied to most any camera. 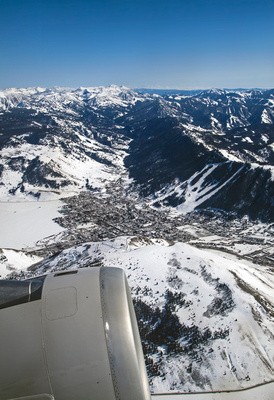 I find that there are many very interesting subjects that can be captured when traveling by airplane.  Whether it is cities, mountainous landscapes, winding rivers or patchwork-like farms, there is usually something out of the window that can make for a unique scene just waiting to be captured.  And the scene, often framed by blue skies and cotton-like clouds suspended in air, can be amazing.

I would also suggest not overlooking just the clouds themselves which can be most interesting as the subject in a photograph - appearing as waves of cotton balls of varying density.

For me, mountainous regions with white snow capped peaks, winding rivers, and small towns nestled in valleys is hard to beat as the landscape contrasts against a blue sky and everything just seem to pop.

One of the challenges is knowing when you will be approaching a subject rather than spending your entire time looking out of the window.  Other challenges to consider are lighting, location, equipment and technique.

As with any photography, lighting is a very important factor to consider.  Of course, shooting into the sun is never a good idea.  And, as is the case with land-based shots, the higher the sun is above the subject, the more washed out the subject can become. The best shots, in terms of lighting and color, are generally taken in early morning or in evening.  When the sun is low, subjects are touched by its warm glow and the lighting creates contrasts and nice shadows.

Regretfully, by being in an airplane, the outside lighting is one thing you cannot control.  And unless you have a flexible enough schedule to plan your air travel to have you over a subject at a specific time of day, you will just have to do the best with what you are given.  Most travelers do not consider the possibility that they may be taking pictures out of the window of a plane when they plan their travel itinerary.  For the photographer, however, it is nice to plan ahead of time so you are prepared - just in case. 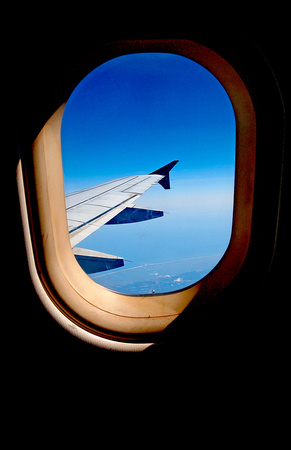 Your shooting location is simple.  Choose a window seat that is away from the wing. There are times having the wing as part of the image can be interesting - and can often be used as a nice transition shot in a slideshow.  But, the wing can also obscure some parts of a subject that you may wish it had not.  And, If you are directly over the wing, you may easily end up with a shot of just the wing itself.  Many will book early and request seats toward the front of the plane, which then avoids the wing in the image.

Sometimes the window glass will be scratched or display other flaws. This, however, is out of your control and may determine whether or not any shots will be possible where you are located.

Your lens will focus at infinity if you are shooting the ground or the clouds and not the wing of the plane and the sky.  If this is the case then the minor imperfections in the window glass will be slightly out of focus and not as noticeable.  Test it out at various lens openings too, the wider the lens opening (smaller the F stop number), the better the chance of not seeing the imperfections.  When you view your image in your camera, zoom in so you can really see what is in focus and what is not. The D7000 and other cameras allow you to do this.

It also helps to know which side of the plane to be on if at all possible.  For example - suppose you will be flying into Reagan-National Airport (outside of Washington DC) coming from JKF in New York and you want to capture the monuments in Washington.  The flight path will take you west of Washington as you come form the north.  You will then want to book a seat on the left side of the plane leaving from JFK.  As the plane is over Washington DC on its final approach, you will have fantastic views of many of the major Washington moments.  And ideally, you will be coming in when the evening sun is adding its warmth to the scene.

You can often look up flight paths ahead of time to help determine your optimal seat location on the plane for your specific subjects.  But, based on weather and other unforeseen factors, flight paths can change. 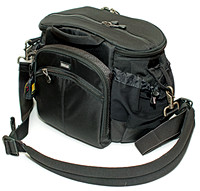 I would recommend using a high quality lens on a DSLR that will yield an effective 28mm on a 35mm (Full Frame) camera and chose a shutter speed of no less than 1/250sec.  This will help limit any noticeable camera shake and eliminate motion blurs.  For convenience, a DSLR may be replaced by a small 'point-and-shoot' camera.  The loss of capture control and lower image quality is the trade-off for convenience.

I generally have my DSLR camera in a shoulder bag that fits under the plane seat, ready to go at a moment's notice.  It should be noted though, the space under window seats is often smaller than the aisle and center seat.  In that you will have a somewhat smaller space to work with, a backpack that has to be pulled out, maneuvered around your legs and then unzipped to gain access to your camera may not be the best choice.   I speak from experience here. 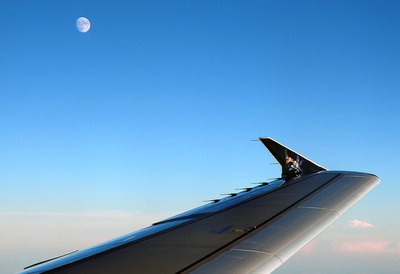 When you compose your shot, fill the frame.  This can also be accomplished later by cropping the final image.  Also include interesting subjects such as the moon whenever possible for a transition or closing sequence in a slideshow or book.  You may even want to leave some open space for a closing title to be superimposed on the final image.

As mentioned before, I would highly recommend using a quality lens.  Although 'point-and-shoot' cameras are easy to carry and allow for quick access, they often have limitations when it comes to both image capture control and overall image quality.  The lower image quality is more noticeable on prints larger than 4x6.  Their advantage of convenience, however, often outweighs lower image quality. 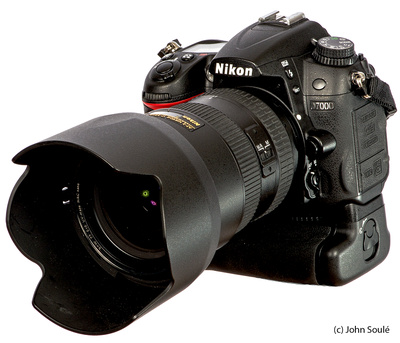 I use a DX type DSLR camera such as the Nikon D7000 when traveling.  For shots from an airplane, I couple this with a Nikon 17-55mm f/2.8 lens for its light gathering capability, wide range and overall image quality (shown on the right).

Depending on the available light on the subject, I often shoot at 1/500sec (either in shutter priority or manual mode) and adjust my aperture and ISO accordingly.  For low light subjects I often have to shoot with an aperture set to f/2.8.  This is where the quality of the lens really stands out.  Technology has come a long way in reducing noise that is created by increasing the ISO to compensate for low light.  The smaller the ISO, the less noise or grain you will have and the clearer your image will be. And by having a f/2.8 capable lens available, I can shoot 'wide open' requiring a lower ISO than if I had stopped down to f/4.  I rarely use 'P' (Program Mode) and never 'A' Auto Mode.

Keep in mind that your are always moving.  The higher your altitude, the less ground motion will be a factor.  If, however, you are on approach to land, you will be much lower to the ground than your cruising altitude and ground motion will become a huge factor.  Here again, using shutter priority (greater than 1/250sec) will be an important factor to consider.

Lights in the cabin itself can also be an issue. To avoid reflections, I try to shoot as perpendicular to the glass as possible.  If I have to shoot at an angle, I wrap a jacket around the camera lens to block out as much side light as possible that may sneak in through the gap.  Shooting at an angle introduces the issue of going through multiple layers of glass and refraction (not reflection) becomes an issue and can introduce distortion and even a prismatic effect (rainbow) that will have an adverse affect on the capture.

Also - be sure a polarizing filter is not attached to the lens.  This can cause even more issues as light passes through the multiple layers of glass/plastic.

One additional consideration is the type of airplane you are flying in.  It is assumed here that the plane is a commercial airliner.  However, some very exciting shots can be taken when traveling in helicopters and small airplanes - such as four to six seaters.  I have found that some exceptional opportunities are provided by spending time in a small plane as you gain a different perspective of the country-side when seen from a 'bird's eye view'.  I would highly recommend considering a tour by small plane whenever possible - and seaplanes are a blast! 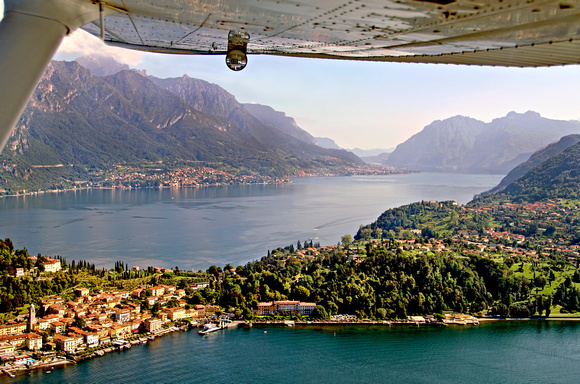 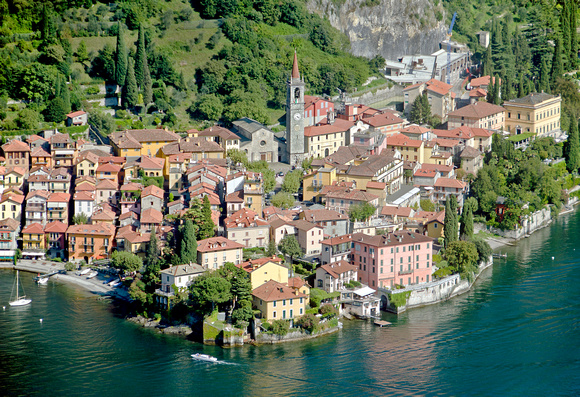 Taking pictures when traveling by air can be both challenging and rewarding.  Hopefully these tips will help make getting those unique captures more of a rewarding experience the next time you fly - and be sure to get a window seat!

For other 'How to Tips', please see my other articles here or in IMPress Magazine: 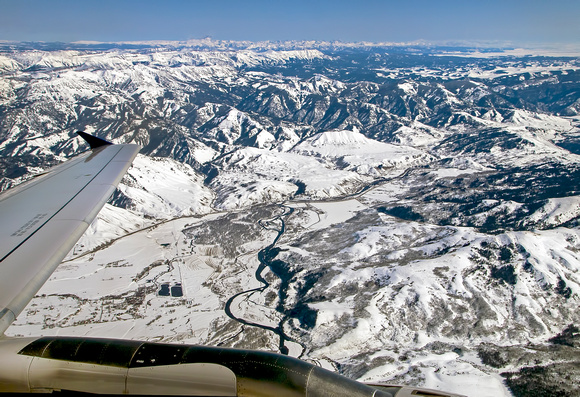 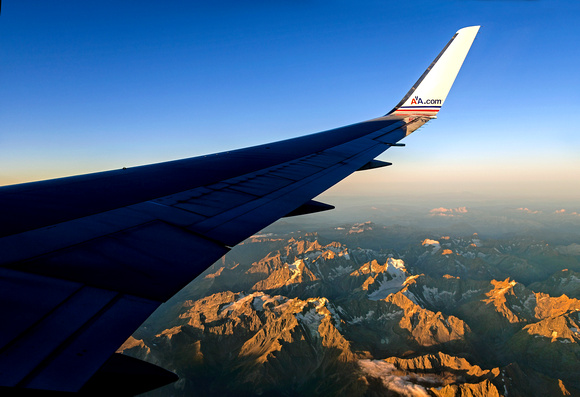