The Art of Storytelling Comes to American Visionary Art Museum 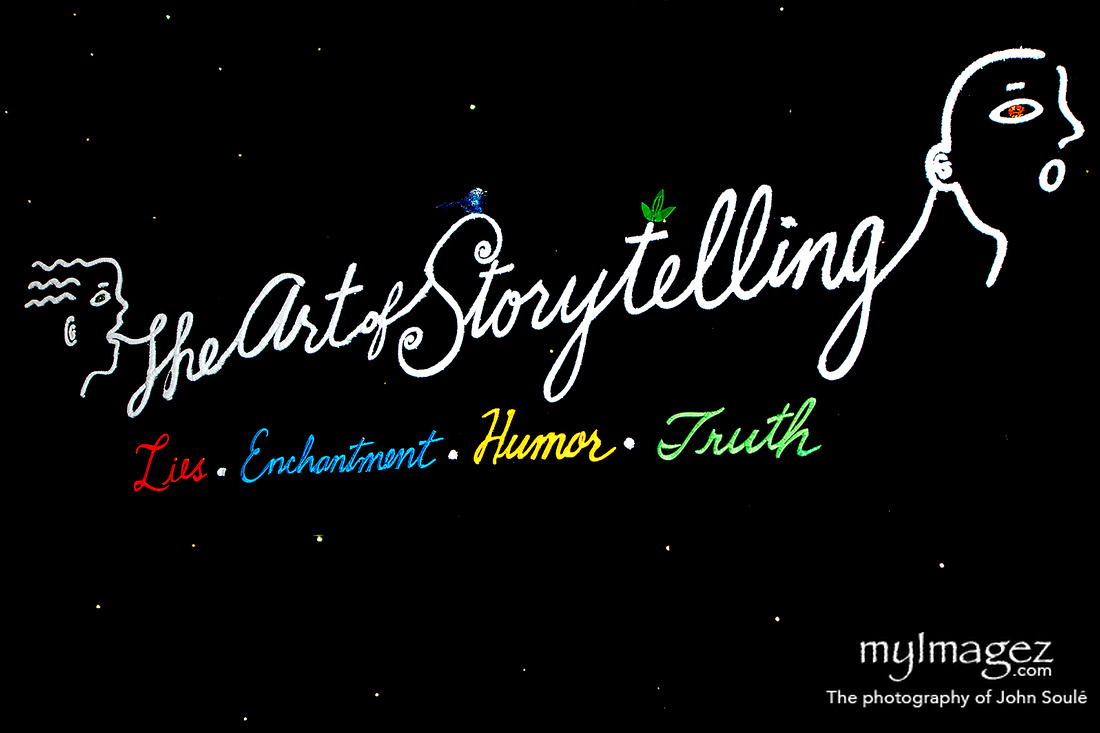 The Art of Storytelling: Lies, Enchantment, Humor & Truth opened on October 6, 2012 at The American Visionary Art Museum (AVAM) in Baltimore Maryland.  Featuring more than thirty artists, this nearly year-long exhibit is considered by many to be the best hosted by AVAM in five years.  At the exhibit, artists have presented their works in film, embroidery, diorama, sculpture, film graffiti and PostSecret confessions.  And, many of the artists were on-hand to verbalize their story during a special Media preview. The exhibit was brought to AVAM by the co-curator team of Rebecca Hoffberger (Founder and Director of AVAM) and Mary Ellen “Dolly” Vehlow  (award-winning graphic designer) who together brought works hat included darker, more troubling images than one might expect.  ‘From scripture to fairy tale, cartoons to cyberbullying, the raw power of stories to inspire and enchant, spread lies or to inform, simply has no equal’ according to a press release.

The following article is a very brief recap of some of those artists and their works that are now on display. 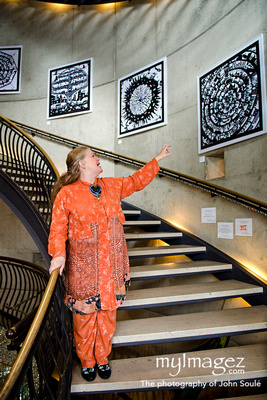 Béatrice Coron, whose works include illustration book arts, fine art an public art, provided her characteristic silhouette deigns created in Tyvek to great visitors along the  main staircase to the second floor of the museum and… 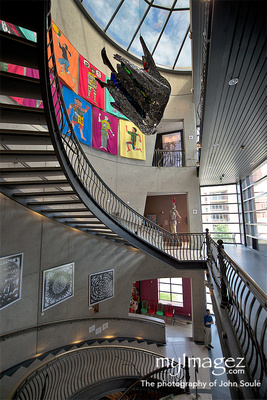 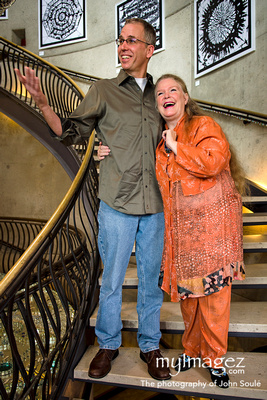 Frank Warren is the creator of the Post Secret project that has produced five best-selling books based on the postcards revealing a secret that have been sent to him since 2004. Warren, who used to stick self-addressed postcards between pages at a bookstore in Baltimore, inviting strangers to send him their secrets, has received half a million postcards that he has organized into countless exhibitions and five books. He has had exhibits at AVAM since 2007. For this year’s show, he selected postcards around the theme of bullying. It turns out that bullying was his own deepest secret. 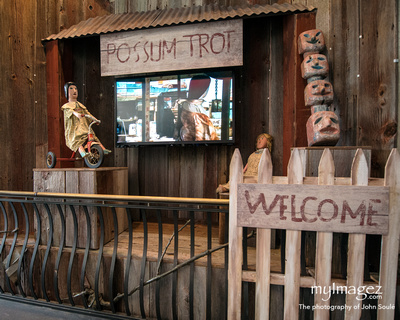 Portions of Calvin and Ruby Black’s Possum Trot town, which was created in the early 1950’s in the Mojave desert for their rock shop, was on display with a few of the actual dolls that were hand carved by Calvin.  Each doll represented someone important in this life.  The dolls were placed in an animated display to lure visitors into his shop.  A wonderful documentary film of actual footage of Possum Trotwas on continuous display (provided by Light-Saraf Films). 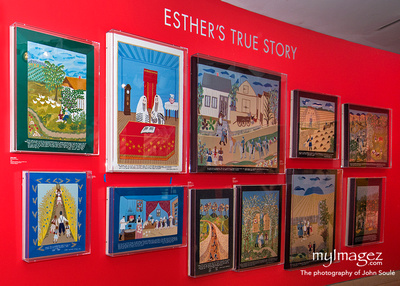 The late Esther Nisenthal Krinitz found her own way to deflate painful secrets. As a young Jewish girl in Poland, she escaped the Nazis by pretending to be a Catholic farm girl. She translated those memories into fabric tableaux that are remarkable for their content as well as their visual subtlety. When she depicts a meadow, she gives us not a solid field of green but five different kinds of green thread, sewn in a pattern of sunlight and shade. She sews the lines in the bark and in the leaves of a tree. This is vividly visual art.  Esther and her sister Mania were the only members of their family to survive the Holocaust.

Bernice Steinhardt, one of Esther’s daughters, was on-hand to explain that ”When people see my mother’s work, they are always struck by how incredibly beautiful it is, even as she tells these horrific stories.” 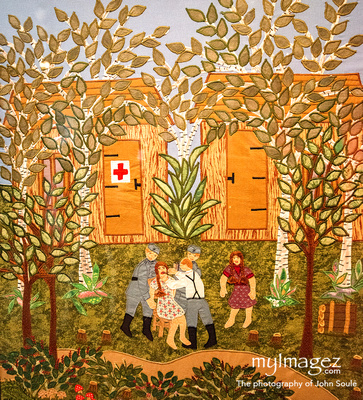 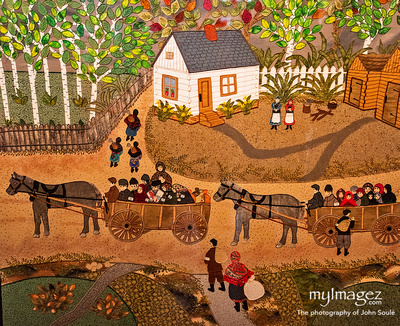 “Once she realized that she could tell her story through sewing, she never stopped,” Steinhardt says. “She always had a picture in progress. During the last 10 years of her life, she made 34 pictures. It had become an essential thing for her, to introduce the family that she had come from to the family that she created.” 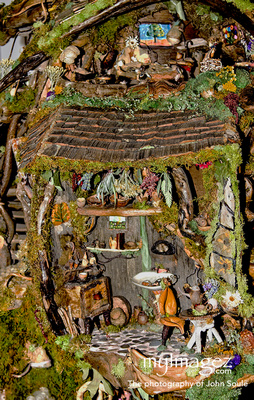 Debbie and Mike Schramer provided their vision of Fair y Tree Houses made completely from recycled natural materials such as flowers, moss, leaves, seaweed and stones to sculpt small pieces of furniture and dwellings. The attention to detail was truly amazing.  Each was several feet tall. 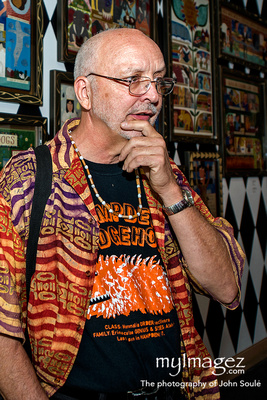 Allen Hicks creates art, usually in his backyard, whenever he has time. His pieces hang from trees, are attached to the fence in his front garden and inside his rowhouse. “I’m not a trained artist. I’ve never been to art school,” he said.  He displayed a photo of his metal LOVE sculpture made out of old election signs that he has erected on his back fence, the site of a lot of his artwork. “I had to replace them three times,” he said “… because people ‘loved’ them.”  For the exhibit, he provided a head and knife sculpture (inspired by an incident experienced in a bar) and what at first appears to be an official Baltimore City sign but contains the words ‘Madman or Genius’.  (He often attaches it to his truck.) 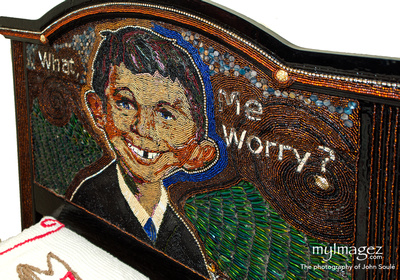 Patty Kuzbida came to AVAM as a volunteer and was inspired to create art as personal gifts.  One of her most popular works, ‘What Me Worry’, is a headboard made from glass beads, fake jewelry and beetle wings in an arrangement to depict the gap-toothed, smiling face ofMAD magazine mascot Alfred E. Neuman. 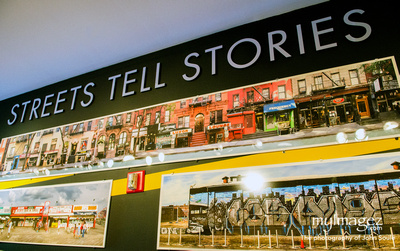 Larry Yust, well known for his contributions to educational films, is an avid photographer who is always engaged in new projects.  He makes his compelling images by snapping overlapping photographs of blocks of storefronts and buildings, ensuring that the plane of the camera lens and the plane of the subject always remain parallel. He records numerous pictures for each elevation, and then digitally composes them into one long seamless image, rendering a perspective that cannot be captured by other photographic techniques or even the naked eye.  One such project is on images of graffiti and street art that tells stories from across the globe. 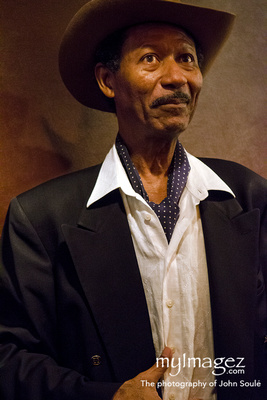 Mathew “Bay” “Bay” Williams was on hand to talk about his famous painting, “The Crying Child”  which depicts the loneliness he had experienced as a child growing up in the Ghetto area of Baltimore. 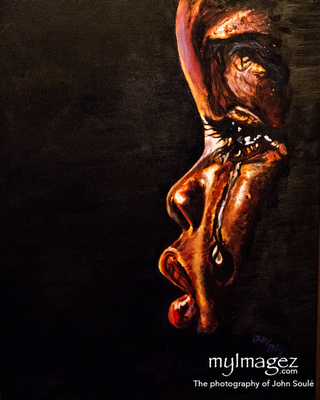 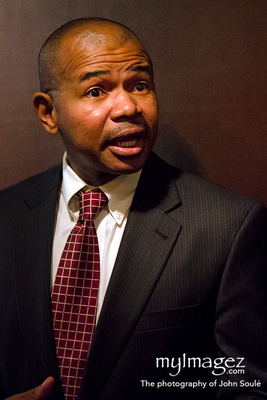 The owner of an extensive and eclectic collection of Black memorabilia comprised of over 30,000 items, Merrill has exhibited his collection widely at museums, universities and schools, national conferences and a variety of other settings.  In his presentations he uses items from his collection to emphasize the accomplishments and positive contributions that African Americans have made to American society over the course of its history.

Dr. Merrill addressed the many accomplishments of  Dr. Kennard as a brilliant African American physician and minister. 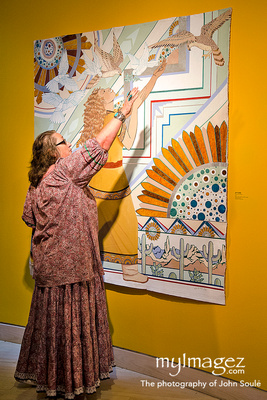 Judy Tallwing, a long-term political and social activist, is a recognized and accomplished fine Native American artisan.  Her works on display, painted with precious metals and adorned with prayer beads, speak to the oral traditions that pass sacred stores to new generations. 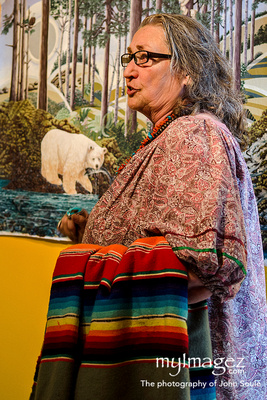 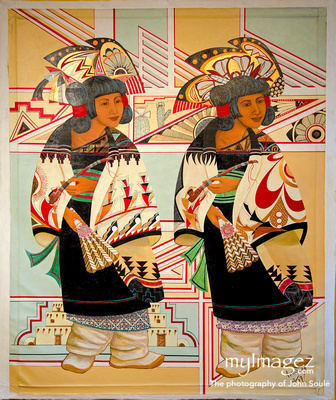 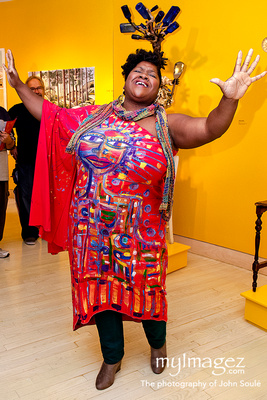 Pittsburgh’s Vanessa German broke into an impromptu piece about ‘hands’ to everyone’s delight.  On display were her mixed-media sculptures that were powerful creations and a must-see for the exhibit. 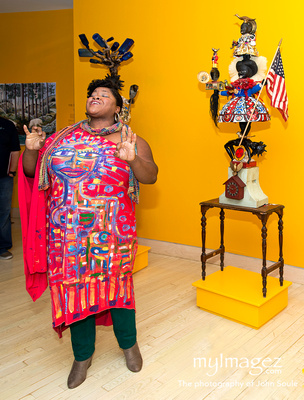 “I grew up in a rough section of L.A. during the ’80s when gangs and crack were taking over,” German says, “and one way mom kept us off the streets and in the house was to have us making things all the time. If we wanted books, we made them. If we wanted dolls, we made them. My first doll was a plastic detergent bottle with a light bulb for a head. When we moved to Pittsburgh, mom asked us to make angels for the tree, but I was depressed, so I made a clay doll and stuck rusty nails into its head. My sisters said, ‘Vanessa, you’re supposed to make an angel,’ but I said, ‘This is how I feel.’ Later on, I found out that, in the Congo, the Nkisi are wooden power figures with nails pounded into them. When I saw that, chills went down my spine, because they were doing things for hundreds of years that I did on my own just because it felt right. I realized if I could make a Nkisi, it just might change my life.” 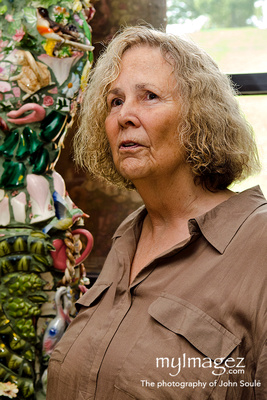 Timmerman Daugherty, known for her ‘Weird Garden’ in Baltimore Maryland approaches art outside the rules. After a car accident in 1998, Ms. Daugherty focused her attention on art as a release from pain.  One of the works she displayed was ‘The Selike’, inspired by the traditional folk song from Orkney, Scotland ‘The Great Selkie of Sule Skerry’ . 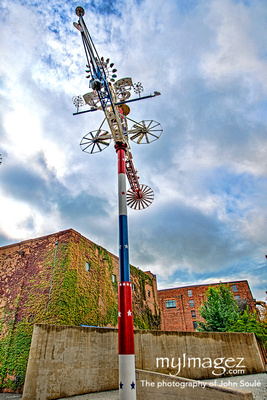 Often it is said that a picture is worth a thousand words, and for this exhibit, that is so very true.

However, having the actual artists tell their stories was pretty amazing I must say.

AVAM always has some very cutting-edge exhibits, and this certainly is one of them.   AVAM also sponsors the annual Kinetic Sculpture Race also covered in both myImagez articles and on ipaIMPress Magazine.

AVAM – a recommended stop on your visit to Baltimore Maryland.