The Maryland Blue Crab - A Treasure In Troubled Waters 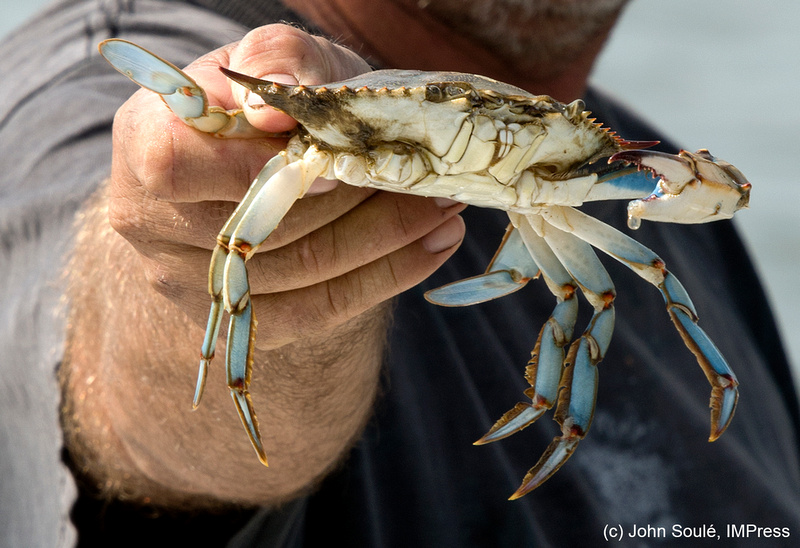 As the lobster is to Maine, the Blue Crab is to Maryland.  The reason the Blue Crab is such a treasure to Maryland is not just for the special flavor and the way they are prepared, but also for the fact that more than one-third of the United State's catch of Blue Crabs come from the Chesapeake Bay using an age-old technique of harvesting.

Most Marylanders can taste the difference between a 'local' crab from those that come outside of Maryland's waters - much in the same manner as a wine connoisseur can tell the source of a fine wine.  There is a special sweetness in the meat of the Maryland Blue Crab and, with the right steaming process and seasoning, the combination can be treat that is longed for all winter long. 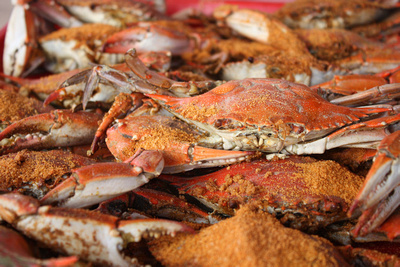 For the most part, cooking Blue Crabs is fairly simple:   Get a large pot, add the crabs, sprinkle in a variety of seasonings, including Old Bay, a touch of beer, and apply heat to steam them. The next part,  however,  is not as easy.  The crab meat is tucked away behind a hard shell that has to be pried off.  Once the shell has been removed, 6 gills, or lungs, called the 'dead man fingers' must be removed.  Below this, and some other unwanted 'innards', lay the cavities of meat encased in membranes of cartilage.

The meat then has to be ‘picked’ out exposing the ‘back-fin’ and the precious ‘lump’ meat.  Pickin' crabs can be a tedious process that some may find takes much too long.  It is a process that you need to plan on being occupied for possibly several hours.  And for those folks that are with you and not hard shell lovers, this can prove to be a very boring time as they wait for everyone to finish their meal.  But for many of us, this is a tradition and social event that you grow up with and look forward to all summer long.

Pickin' cabs is truly an art, and each person can have a style all their own. You will see some folks use their skills to pick through the crab like a trained surgeon and then there are those that will smash a crab with a mallet and waste much of the true delicacy. It is said that you expend more calories than you get from a crab because it takes about 20 crabs to get a pound of meat. However, there's nothing better than a cold drink, a pile of crabs and fresh corn to make all the world seem right.

Crab meat itself is enjoyed by consumers around the world as the result of workers manually picking through the crab, separating the meat from the cartilage and ‘cleaning out’ unwanted parts.  All this is done, one crab at a time and by hand.  Crab meat is then packed into containers for sale around the world and can be found in various dishes, such as Crab Imperial, Crab Cakes, and so on. 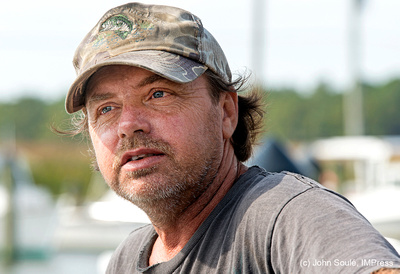 For the watermen of the Maryland Eastern Shore, Blue Crabs have become a last hope effort for making a living from the local waters. Crabbing is an industry that is becoming increasingly less viable as this resource becomes more and more limited.

Watermen are faced with several problems in their annual quest for a good harvest of crabs: the crabbing season is roughly only from June through October, the habitat has been declining due to poor water quality and natural predators are on the increase.

As human populations have increased along the Bay, so has the demand for crabs.  Unfortunately adult populations of the Blue Crab are decreasing. The majority of the environmental damage is blamed on the region's large poultry industry and the run-off of nitrogen and phosphorous-rich chicken manure into the Bay.  This has led to debate over fishing quotas, stricter farming rules, and the possibility of increased taxes to help clean-up the Bay. Another side effect is an increase in prices charged for crabs as demand increases and availability decreases.

It is hoped that proper management of the crab harvest, as well as water quality improvements and bay grass restoration efforts, will help restore the Bay's blue crab population and maintain this valuable resource into the future.  Blue crabs are currently managed as a single species, using minimum catch size and seasonal limits on harvests to meet target levels of fishing pressure.

The home to the Maryland Blue Crab is the waters of the Chesapeake Bay and Maryland’s Eastern Shore.  Of the estimated 500 million crabs living in the Chesapeake Bay, an estimated 75% of the adult stock is removed every year.  With crabs maturing after 18 months, the supply has been barely able to keep pace with the harvest.

Yes, you can find Blue Crabs in the Atlantic waters off the Carolinas, and in the Gulf waters off of Texas and Louisiana.  But to a Marylander - Blue Crabs are just not the same as those that come from other waters.  In fact, what makes the flavor of the Maryland Blue Crab unique has to do in part with the water where fresh water and salt water mix.

The word "Chesapeake" comes from a Native American word which means "great shell-fish bay." And there's nothing more “Chesapeake” than the Bay's signature crustacean, the blue crab. Callinectes (“beautiful swimmer”) sapidus (“savory”), a member of the swimming crab family, is an aggressive, bottom-dwelling predator and one of the most recognizable species in the Bay. 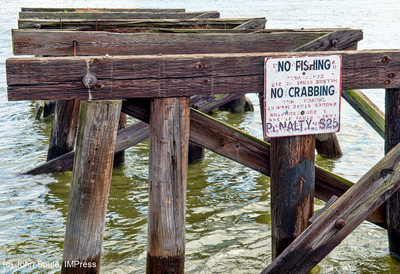 The crabbing process has actually as not changed much since the time watermen first came to the Chesapeake Bay.

Commercial crabbers attempt to harvest large numbers of crabs for resale by taking to the waters using specially designed boats from which they will deploy crab pots or drop long baited lines. Recreational crabbers go after only what they can consume themselves and either use small boats or simply drop bait lines down around piers where crabs often congregate.

Crabs are ‘bottom feeders’ and are considered scavengers. Going after them means getting down to their level at the bottom of the water - sometimes not such an easy task. 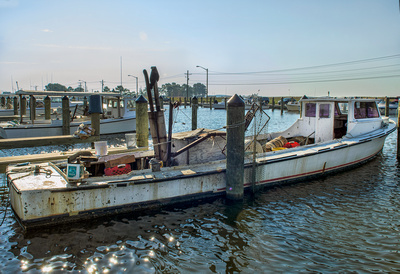 The typical crabbing boat has an enclosed helm and a long, open, work area with low sides (gunwales). Many utilize a motorized "line hauler" to hoist the crab pots from the water.

Crabbers will either use a trotline, bait line or crab pots (cages). 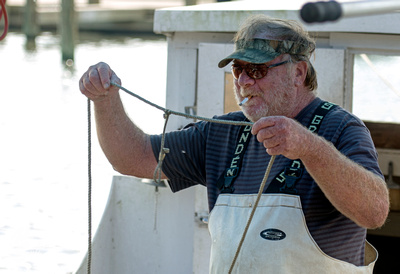 A trotline is a long line that is knotted at intervals to hold bait.  It is considered to be one of the most efficient methods of crabbing because it allows the waterman to work large areas of water of varying depths and conditions in order to maximize the catch. Commercial crabbers run one or more lines up to a mile in length! 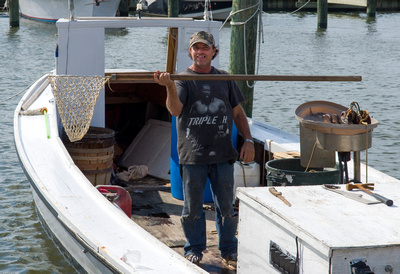 The bait line or drop line method is the simplest way to catch Blue Crabs. The crabber lowers a baited line, (raw chicken parts work well), into the water, waits for a nibble, then slowly raises the line after a bite as the crab hangs onto the bait. A dip net is then slipped under the crab.  A slow process indeed.  Patience is a requirement. 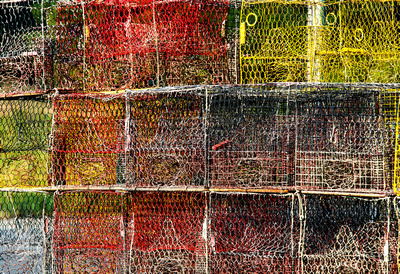 Crab pots are the tool of choice for commercial watermen - although only lasting one or two seasons. Watermen need a good bait to lure the crabs inside. Eel, herring, and menhaden are the most popular baits. Most watermen check and re-bait their pots daily.  When stacked, the crabs pots look like an abstract work of art. 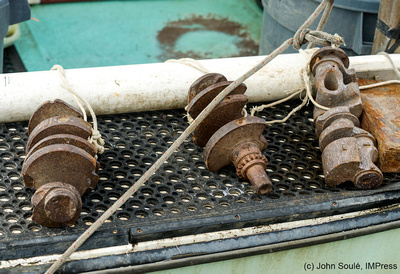 To weigh the lines down, waterman will often use any heavy object they can find - including parts from an automobile engine. 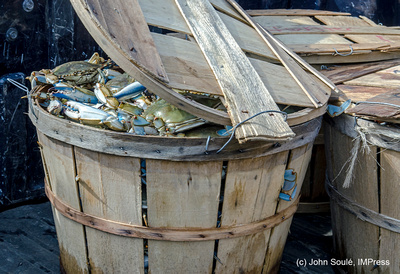 Once harvested, crabs are sorted by size and placed into wooded bushel baskets for resale.  In speaking with a local watermen, it was stated that once the bushels are packed, he loads them into his pickup truck to transport to the market.  Wise consumers, however, often arrive at  the boat docks while the trucks are being loaded and make their purchases before the trucks take to the roads.  A bushel will hold about 8 dozen medium to large size crabs (less than 8 pounds of meat.)

The Impact of Hurricane Sandy - the 'Perfect Storm'

Turbulent waters as the result of storms greatly inhibit the ability to harvest crabs.  And the recent hurricane that hit the Eastern United States was no exception and resulted in the extension of the 2012 commercial crab season into mid-November. The days of lost opportunity occurred during the time period when catch rates for female crabs are at the highest because of the timing of the Southward migration of female crabs.

If you have not had the chance to taste a Maryland Blue Crab, it is truly hard to explain what you are missing.  But once you do, you may very well understand why the Blue Crab has become such a treasure to the folks of Maryland and why there is concern over the local crabbing industry. 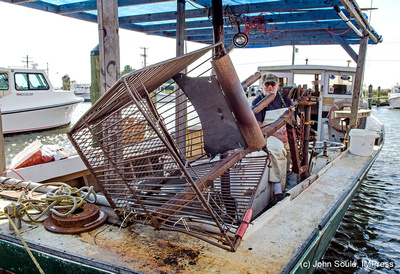 Please see my other articles here or in IMPress Magazine @ ipaImpress.com