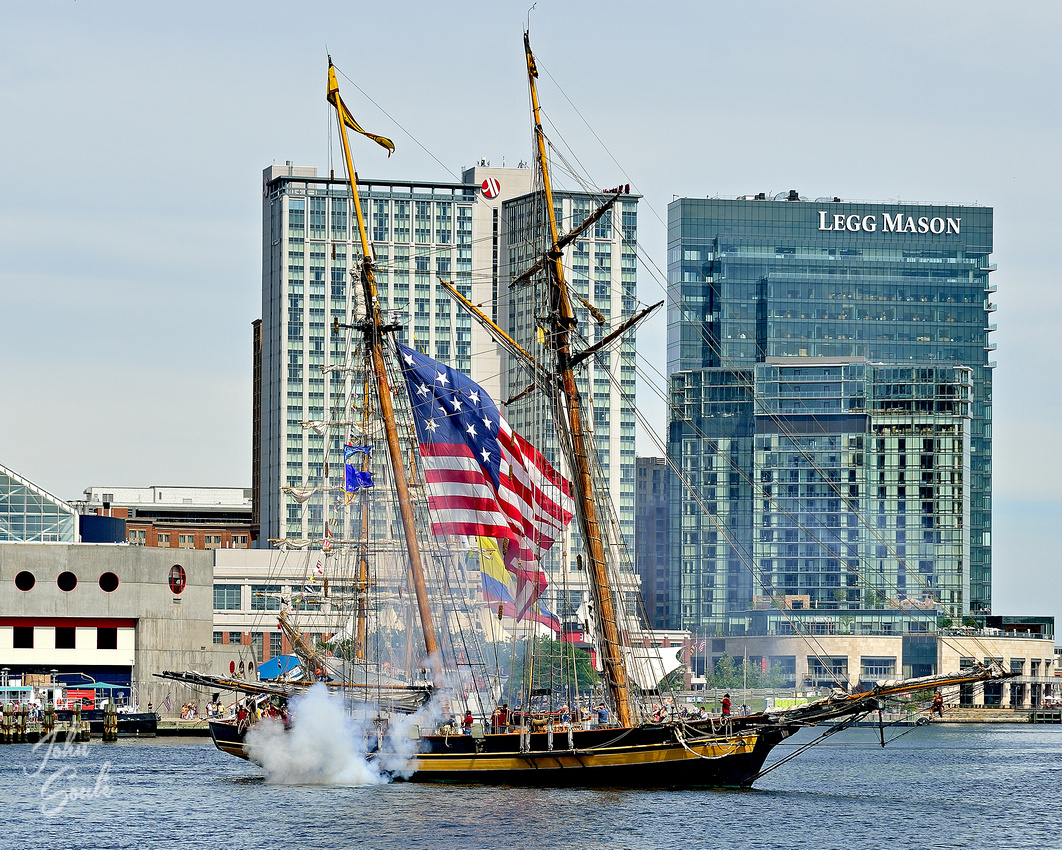 The Battle of Baltimore - The Tipping Point

The year was 1814 and the War of 1812 was now in its second year and the untrained militia that was left to guard Washington DC was no match for British troops as they burned most of the public buildings including the Capitol, Library of Congress and Treasury.  George Washington had taken his troops to Annapolis thinking the invasion would be there.  With fires burning throughout the city, another battle was about to take place that would become the tipping point of the War, forge a new path for freedom in America and inspire the writing of a National Anthem.  The stage was being set for the Battle of Baltimore. 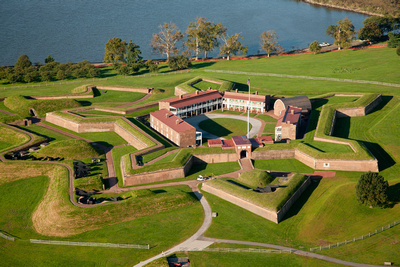 With the prior victories in mind, a confident British Royal Navy sailed into the Chesapeake Bay. The only thing that stood in their way from advancing to Baltimore was a few American warships and a star shaped 'Fort McHenry' with just 1000 men standing watch.

However, unlike what happened with the burning of Washington DC one month earlier, Baltimore was more prepared.  The attack was to take place on both land and on water with nineteen British warships set to send nearly 1,800 cannon balls at the fort as 5,000 British troops were on land for their assault. 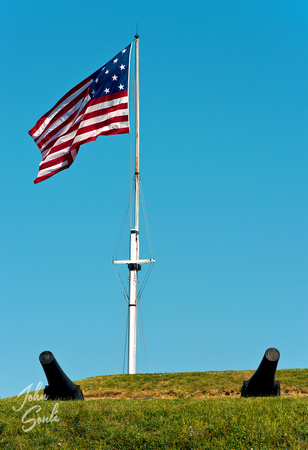 Our Flag Was Still There

Francis Scott Key and John Stuart Skinner had set sail from Baltimore flying a flag of truce on a mission to secure an exchange of prisoners. The two were allowed to board a British warship and show letters written by wounded British prisoners praising Americans for their kind treatment.

However, fearing that these two would return with information to the American militia about the British plans of attack, it was decided by the British that they were to remain on the British boat until after the battle had unfolded.

The bombing continued for 25 hours.  Lasting throughout the rainy night, and from a vantage point not too far from the battle, Francis Scott Key watched as Fort McHenry was hit by rockets and bombs bursting in air.  He observed that the fort's smaller "storm flag" continued to fly, but once the barrage had stopped, he would not know how the battle had turned out until dawn - either by a surrender flag of white, or the American Flag.

As the weak morning sun filtered throughout the clouds, a huge flag had now replaced the smaller flag and was flying high over the ramparts.  The battle was over and as the British retreated, this moment inspired Key to jot down some verses of a poem on the back of one of the letters he had been carrying.  He titled the poem "The Defense of Fort McHenry" and set it to an old English drinking song, "To Anacreon In Heaven".  In 1931 it became the American National Anthem. 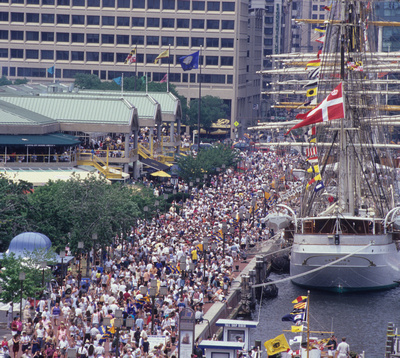 In the summer of 2012, nearly a million visitors came to Baltimore to witness the Bicentennial 'Star Spangled Sailabration'  to commemorate the War of 1812.  The largest maritime festal in Baltimore history kicked off with the arrival of more than forty tall ships and naval vessels from thirteen countries from around the world. The Baltimore Star-Spangled Sailabration was part of the national launch of the War of 1812 Bicentennial and consisted of a week-long festival that included naval ships, symphonies, an airshow and fireworks.

The United States Navy partnered with host cities, the Marine Corps, Coast Guard, and other government, private and public international organizations to the tell the story of America's 'Second War of Independence.'  The Commemoration will continue throughout the United States into 2013 with events marking the Battles of Lake Erie and Lake Champlain and into 2014 with the bicentennial of the writing of the Star-Spangled Banner and finally end in 2015 with the Bicentennial of the Battle of New Orleans.  (For a full schedule of events and a full list of ships participating in each city, please see: www.navywar0f1812.org) 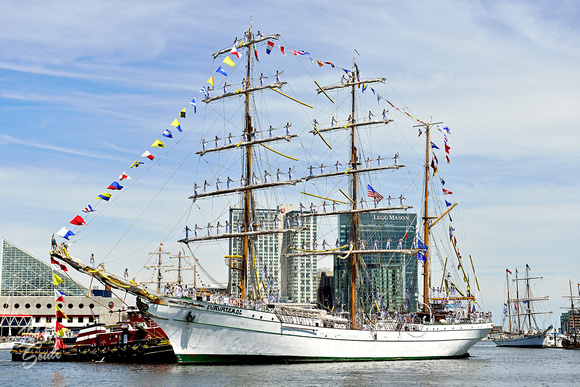 The arrival of the Tall Ships to Baltimore kicked off the week-long events.  As each ship passed by Fort McHenry, they exchanged cannon salutes.  The majestic flotilla of more than 40 tall ships and naval vessels from 13 countries around the world was truly a sight to behold as sailors stood precariously on top of the yardarms of the Tall Ships as they arrived to the cheers of thousands of visitors crowded around the docks.  After docking, the ships were opened to anxious visitors for a brief tour of the vessel.  The opening image of this article is of the Pride of Baltimore II that is a reproduction of an 1812-era topsail schooner, the type of vessel, called Baltimore Clipper, that helped America win the War of 1812 and finally secure its freedom. 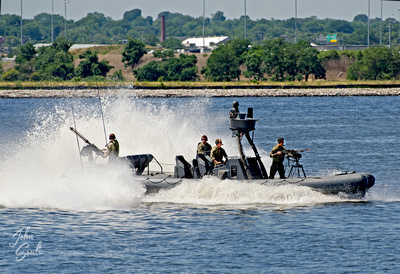 In the shadow of Fort McHenry, the Navy Seals gave over thirteen thousand spectators a first hand look as they sprang into action.  In a mockup situation, a Seal Team took a handcuffed prisoner to the water's edge for a waiting motorized raft.  All of a sudden three assault craft came in 'hot' as they laid down cross fire to an enemy machine gun installation hidden near the shoreline.  As the prisoner was taken aboard one of the crafts for extraction, Seal Teams continued their fire.  This was like watching a live version of the movie "Act of Valor".  Quite an exciting way to start the show. 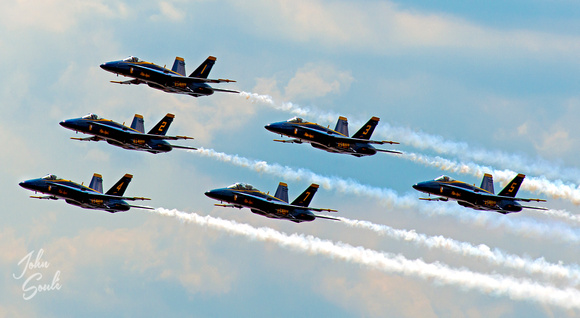 Following the excitement provided by the Navy Seals, the air show began with a flyover of F-18 Super Hornets and continued with various air craft from the Navy, Marines and Coast Guard.   The stars of the show were the six Blue Angels demonstrating the tight precision flying of their F-18s - often only 18" apart and traveling at speeds of nearly 700mph and as slow as 100mph.

During their aerobatic demonstration, the Blue Angels split into their famous 'diamond formation' (Blue Angels 1 through 4) and the Lead and Opposing Solos (Blue Angels 5 and 6). Most of the show alternates between the Diamond Formation and those performed by the Solos.  The Solos really showcase the high performance capabilities of the F-18 through the execution of high-speed passes, slow passes, fast rolls, slow rolls, and very tight turns.  (See the video slideshow below for more images from the air show and the Blue Angels).

By the Dawn's Early Light 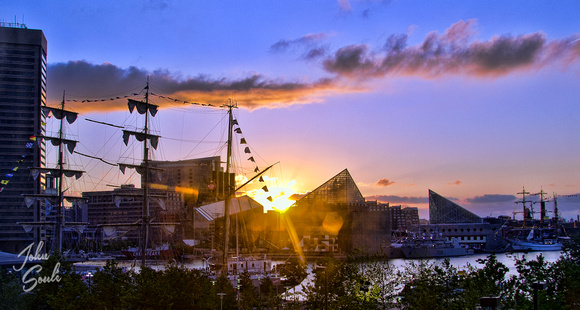 It was quite a packed week of events and with so many visitors in Baltimore, it had been suggested to take public transportation and if possible, book a room near the harbor.  A very good suggestion indeed.  For much of the weekend, the city was in gridlock.  And, if it were not having a room near the harbor and a press pass that got me through road blocks, it would have been most difficult in getting around.  If you are lucky enough to experience one of these festivals over the next few years (the next one in Baltimore will be September 6, 2014), I would highly suggest booking a room nearby, count on public transportation and make dinner reservations well in advance.  The wait for dinner was over two hours for those that did not make reservations as we had.

Notes for the Photographer

Festivals such as this can be a photographer's dream.  From candid photographs of people from all walks of life to spectacular subjects such as tall ships and military air craft - the opportunities are almost endless.  The shots posted here were taken from a Nikon D800 (see my brief review) and a Nikon D7000.  Most days I carried both cameras and used a Nikkor 17-55mm f/2.8 lens as a 'walk-around' on the D7000 and a Nikkor 70-200mm f/2.8 VRII on the D800 for high-resolution close-ups.  On 'media' days, I also set up a tripod in key locations and waited patiently for the subjects to come to me.  (One of the benefits of a media pass is being given 'inside' information of where and when to be.)

Getting good shots of aircraft can be very tricky.  Often you will be shooting into the sun and your images will lack contrast.  Additionally, the subject can be traveling at quite a high rate of speed which can make keeping the image focused difficult. This type of photography requires a few special techniques that I will address in a future article.  (also see Space Shuttle Discovery's Final Journey for techniques used for that photoshoot).

With digital cameras, taking a lot of shots can be very easy - sometimes too easy.  For three days of shooting, using two cameras, I captured 981 images.  But with any photography, it is a numbers game - the more you shoot, the more keepers you will have.  Being prepared with the right equipment, in the right location, at the right time of day can make all the difference in the world.

For a recap of the Tall Ships and Air Show - please see this brief video: