We Will Never Forget - Rolling Thunder 2012 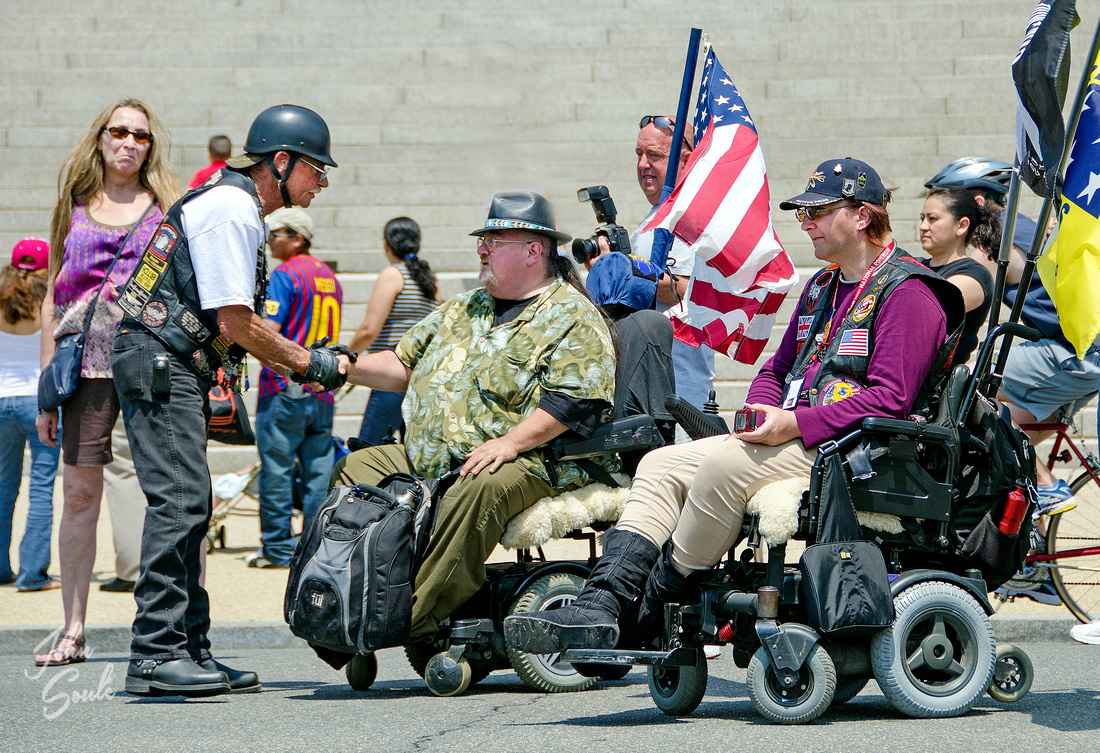 Memorial Day means different things to different people in the United States. For some, it marks the beginning of summer, a time when pools open and we head to the beach. But for some, Memorial Day weekend means parades, visiting cemeteries and honoring fallen soldiers.  In the Washington DC area, Monday marks daylong events, starting with a parade down Constitution Avenue and the laying of the wreath at the the Tomb of the Unknowns at Arlington National Cemetery. But on Sunday, it is the bringing awareness for the recognition and protection of Prisoners of War (POWs) and those Missing in Action (MIAs) by Rolling Thunder,  consisting of over 450,000 motorcycles and one million spectators, as it converges from all across the country on Washington DC.  As hundreds of thousands lined the streets from the Pentagon to the heart of Washington, the thunderous sounds of motorcycles echo off government office buildings as onlookers cheer, wave flags and salute the riders. 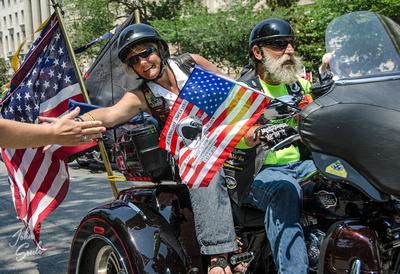 Rolling Thunder is an annual motorcycle rally that is held in the nation's capital during the Memorial Day weekend in tribute to American war heroes. The tribute first started out with 2,500 participants and has now grown to approximately a million participants and spectators from 90 chartered chapters throughout the United States and abroad. This year Rolling Thunder celebrated its 25th anniversary with over 450,000 motorcycles coming to Washington. 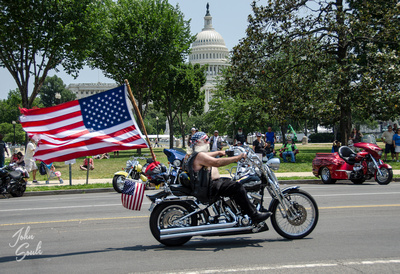 In the fall of 1987, a group of veterans met to discuss their personal concerns about the POW/MIAs from the Vietnam War. They were deeply troubled by the neglect of attention given to those who did not make it out with their lives or their freedom. It had been reported that more than 10,000 Americans were living in dismal captivity. These reports were generally ignored by the government and mainstream press and was truly a difficult time in America's history.

In 1988, veterans of the Vietnam War rallied together their families, fellow veterans, and veterans' advocates to organize a demonstration in Washington, DC during the Memorial Day weekend. They announced their arrival with the roar of their Harley-Davidsons, a sound not unlike the 1965 bombing campaign against North Vietnam named Operation Rolling Thunder. Approximately 2,500 motorcycles participated in this rally, demanding that the U.S. government account for all POW/MIA's. The group became known as Rolling Thunder and each year since has held an annual "Ride for Freedom" to the Vietnam Veterans Memorial Wall.

The group is now actively involved year-round in promoting legislation to increase veteran benefits and resolve the POW/MIA issue from all wars. They also provide financial support, food, clothing and other essentials to veterans, veterans' families, veterans groups, and women's' crisis centers 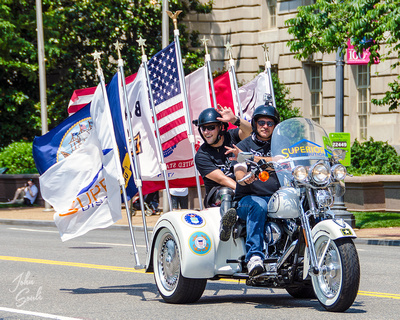 "We Will Never Forget"

While many members of Rolling Thunder are veterans and many ride motorcycles, neither qualification is a prerequisite. Rolling Thunder members are old and young, men and women, veterans and non-veterans.  But, all are united in the cause to bring full accountability for Prisoners Of War (POW) and Missing In Action (MIA) of all wars, reminding the government, the media and the public by their watchwords: “We Will Never Forget.” 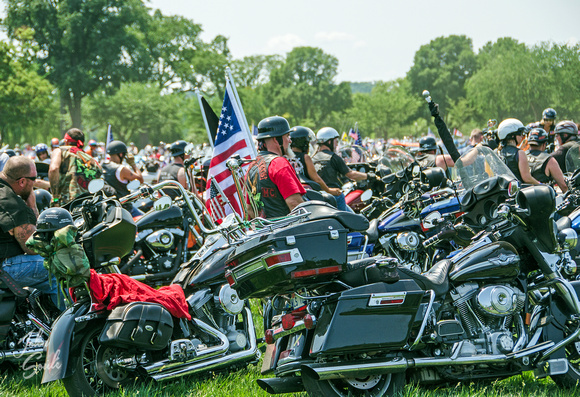 This year started with entertainment on Saturday, May 26, 2012 and continued with the motorcycle rally on Sunday, May 27.  The procession began at the Pentagon at noon and extended into Washington D.C. as it passed the Washington Monument, continued around the Mall to the Capital and then ended at West Potomac Park near the Lincoln Memorial and the Korean War / Vietnam Memorial Wall hours later.

As thousands of riders made their way to the end of their journey near the War Memorials, you could not help but be moved by the emotion that surrounded you.  As I walked toward the Korean War Memorial, I could hear the names of fallen soldiers being spoken over the loud speakers.  Wreaths and American Flags were laid throughout the memorials and decorated war veterans where standing in groups reliving the days of the past.

The excitement had diminished and those that had made the journey here had come to pay their respect and honor the fallen.  The atmosphere was quiet different from what, just minutes earlier, involved crowds of cheering spectators. 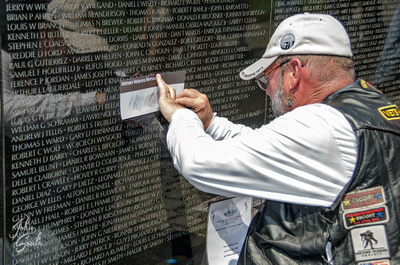 At the Vietnam Wall, long lines formed as many  walked in silence as they looked for the names of their loved ones.  Some, with paper in hand, made a tracing of a name etched into the wall.

Five custom-made "tribute" motorcycles, one for each branch of military service, were built especially to commemorate the Rolling Thunder 25th anniversary. The anniversary tribute, sponsored by the Center for American Military Music Opportunities, featured a variety of musical performances and a series of guest speakers including prominent POW/MIA, military and veterans affairs leaders and activists.

For me, this was an experience that I will never forget and will always appreciate having the opportunity to attend and pay honor to our service men and women. 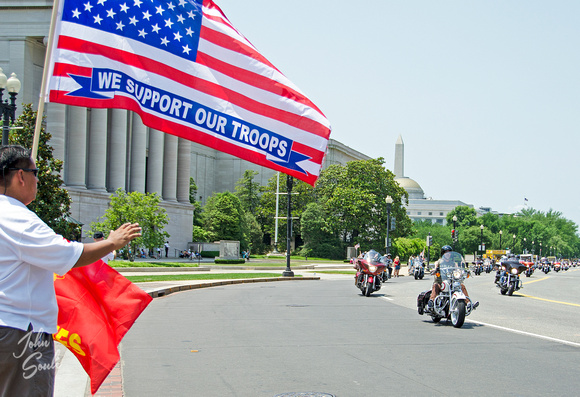 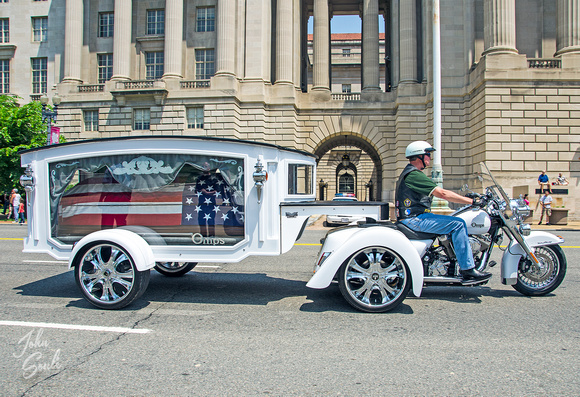 See the video re-cap of the event: