Are tripod Leg covers in your future?  If they are not part of your tripod now, are they a necessary add-on expense to consider?  Perhaps.

An often misunderstood add-on to tripods is the leg cover which has several functions:

From the 'Do-It-Yourself' tape-covered tripod legs to commercially available products, tripod leg covers have different functions that should be considered before you invest time and money in this accessory.

For those that work in extreme temperature conditions, the surface temperature of the tripod leg can become an issue.  From bitter cold to scorching heat, many photographers have found that by covering the upper tripod leg, handling the tripod can be made much more comfortable.  In reality, however, you may never had a need to add a thermal barrier to your tripod legs - especially if the legs are made of carbon fiber.  The idea is good and I know if I was ever in an extreme environment, I am sure a thermal barrier would be a good thing to have.

Covering the upper leg can offer protection from nicks and scratches that result from traveling through heavy brush or perhaps when in contact with a rock.  Only the upper leg is protected, however, unless the tripod is collapsed so the other legs are nested.  Many photographers may never really find this to be a real need in their travels. If I travel, for example, from home to a location, my tripod is transported in a specially designed bag.  Once in the field and my tripod is exposed, I try to stay on trail.  But your activities may differ and protecting your expensive investment may be in order. 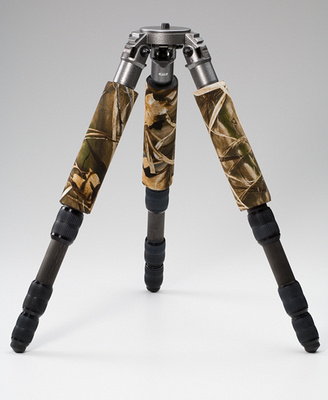 Some photographers cover part of their tripod leg along with their camera to 'camouflage' their equipment from wildlife. The idea is to break the lines of the legs and camera in such a way as to have them blend into the surroundings and 'disappear' to the subjects.  In covering the tripod, only the upper leg portion is covered, which assumes the remaining leg sections will be covered by brush or other forms of nature.  The camouflage materials are available for various environments such as snow, fall colors, forest, etc.   If you need to camouflage your equipment, this is the way to go.

For me, I really do not intend to go waist deep into the brush to photograph wildlife.  I know I would be more worried about what was hiding in the brush with me than I would trying to get that perfect shot. 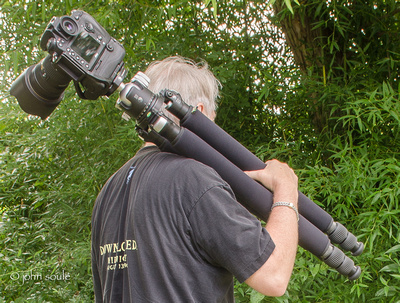 Many photographers leave their camera mounted on their tripod and transport the two over their shoulder for location shots.  Wildlife photographers often have limited time to setup a tripod, mount a camera, and get into position for that perfect shot.  By transporting the camera already mounted and ready to go can often be the difference in getting that keeper shot or not.  Transporting 10-15 pounds or more on your shoulder can become very uncomfortable - unless the tripod legs that rest on your shoulder are padded.  This is a biggie, and for me, this was the function that mattered the most.

In researching tripod leg covers, I came across two from LensCoat.  LensCoat is well known for their specially designed, quality protection for photographic gear.  And, they have two entries in the tripod leg cover department: LegCoat Wraps and LegCoat Covers. Below is a brief summary from what I learned after working with both offerings along some information for your consideration.

Both LegCoat Wraps and LegCoat Covers are available for a wide variety of tripod models with various leg diameters and length.  The LensCoat website has a selection chart to aid the buyer in purchasing the correctly designed version for their tripod model. 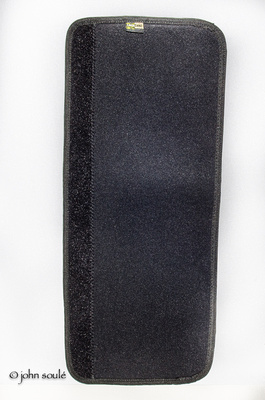 LegCoat Wraps, sold in a package of three, are made from soft neoprene that are designed to wrap around the upper leg of the tripod.  They are easily affixed with a Velcro closure. 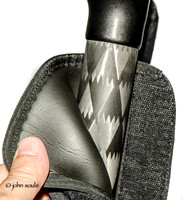 The Wrap's backing is designed to tightly grip the tripod legs so they will not slide. The spongy soft neoprene acts as a cushion when carrying the tripod without the bulk of the traditional LegCoat Cover which has extra foam padding.

Once  wrapped around the leg and closed with the Velcro, a tight bond is formed with a nice finished appearance.  The Wrap has a nice feel and the cushioning is a pleasure when laid across your shoulder. 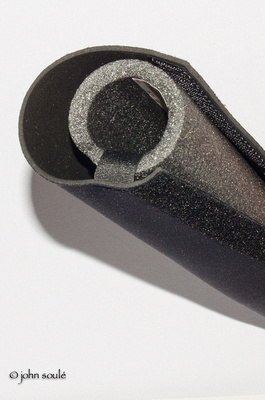 Unlike the LegCoat Wrap, the LegCoat Cover consist of two parts.  The first is a made of closed cell foam padding and looks much like pipe insulation.  It is split length-wise to allow it to easily slide on the tripod leg.  Attached inside is a piece of double stick tape to keep the tube from freely spinning around once affixed to the leg. 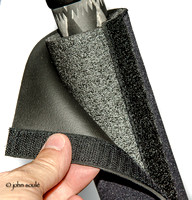 The second part of the LegCoat Cover is a piece of heavy-duty neoprene which  is attached to the inner tube by a strap that runs down the length of the tube.  As with the LegCoat Wrap, Velcro is used to keep the fabric tight around the leg. 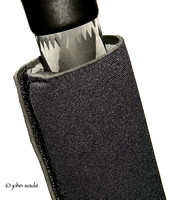 I felt that the LegCoat Cover does not have quite the finished appearance once installed as does the LegCoat Wrap.  I felt seeing the exposed foam liner was not quite as finished as the smooth appearance of the LegCoat Wrap - but that is a personal opinion.  (I know some photographers will actually wrap their upper tripod leg with bicycle handlebar tape.  For them, appearance is outweighed by functionality.)

The LegCoat Cover was also somewhat larger in diameter than the LegCoat Wrap which may prevent some tripods from slipping into their custom tripod bags due to the added protective bulk. 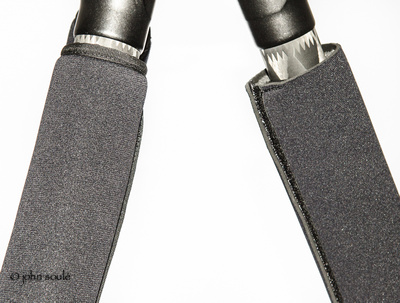 With every silver lining . . . The only real con for me was the fact that, due to the Velcro closure being on top of padded material, the resulting seam from the closure was quite obvious.  It was less noticeable on the LegCoat Cover since the cover itself was only a thin piece of material.  The seam on both gave the leg covering somewhat of an add-on look rather than being part of the original equipment. And, the seam on the LegCoat Wrap was much more noticeable since the Velcro had to lay on top of the layered padding (5mm vs 2mm).
However, the seam in no way affected the function of the coverings - only the aesthetic appearance.  And, this was certainly no deal breaker.
LegCoat Wrap (left)
LegCoat Cover (Right)

I found that both products protected my tripod legs and shoulders when carrying heavy lenses mounted to my camera which was my main objective. Both offerings could act as a thermal barrier keeping the tripod legs comfortable to the touch in hot or cold conditions.

The main difference I found had to do with the bulk and the installation of each. The LegCoat Covers have a closed cell foam core about 1/2"  (12.7mm) thick with a slit down the side plus a 2mm neoprene shell that is the length of the upper leg. The foam has an optional adhesive strip to be applied to the leg to help prevent movement.  A cover wraps around the foam and has a Velcro closure. The total thickness is nearly 15mm.
The LegCoat Wrap was thinner after installation.  It was one piece made from approximately 5mm of soft spongy neoprene that wrapped around the tripod leg and was also affixed with a Velcro closure (as compared to the nearly 15mm for the LegCoat Cover). The Wrap's backing was designed to tightly grip the tripod leg so it would not slide or turn.

After working with both, I decided that the LegCoat Wrap was the better alternative for my needs.  I was not concerned about thermal protection in that my tripod has carbon fiber legs and the idea of having camouflage was not high on my list of necessities. It was the cushioning of the tripod for those hikes with a loaded camera/tripod combination that sold me.  And, being able to remove the covers at a moments notice meant I could change them out anytime I wanted to.  My choice was to go with black (as shown throughout this article), although offerings include a number of bright colors in addition to the black and camouflage mentioned in this article.

Having used the LegCoat Wrap in the field, I am quite glad I made the purchase.  For more information, please refer to the LensCoat website.