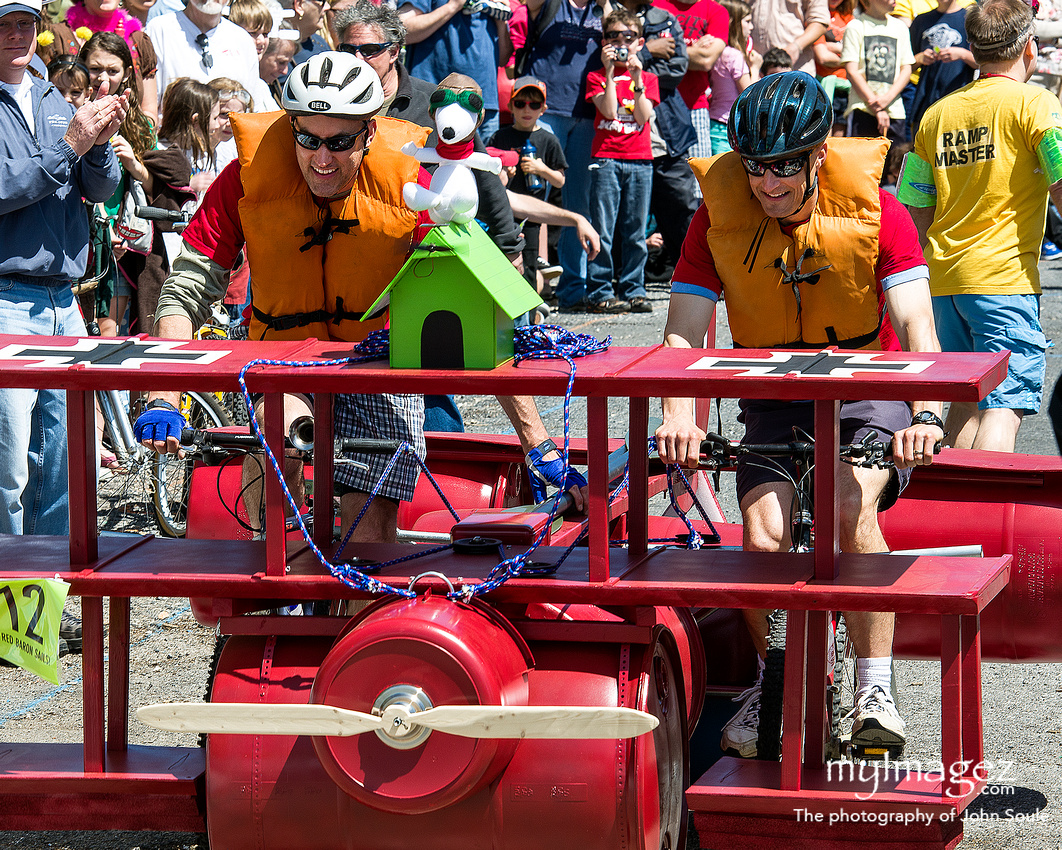 The Kinetic Sculpture Race (KSR) is a unique national competition where the results really do not matter. But kitsch, imagination, and absurdity do. It is not about the fastest - it is about flair and it is about wacky! And this year was no exception. Every May since 1999, the American Visionary Art Museum (AVAM) in Baltimore has been the host to the East Coast Kinetic Sculpture Race Championship. This unique race covers nearly 15 miles surrounding the Baltimore Inner Harbor, lasts about 8 hours and includes negotiating land, water and a combination of both (mud).

In the end, wacky honors are bestowed upon the deserving - the ultimate award being the 'Grand Mediocre Champion'.

During an interview with local TV station WJZ-13, Nick Prevas of AVAM’s Communications, Media & Marketing department, discussed this fun event and stated that everything the museum stands for, the race sort of embodies.

What are Kinetic Sculptures? 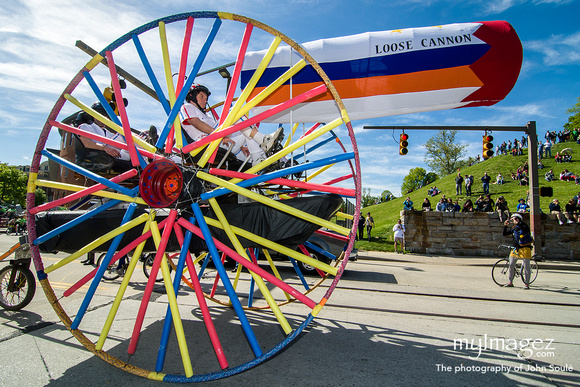 Kinetic Sculptures are amphibious, human-powered works of art that have been custom-built for this unique race. The sculptures are constructed out of used bicycle gears and parts, in the garage or backyards and a lot imagination. One sculpture was a giant cannon mounted on 12-foot wheels that won last year's 'People's Choice' award. Many of the sculptures have incorporated clever engineering to meet the challenges of the course. The wheels of 'Lose Cannon', for example, featured pool floats as spokes for extra buoyancy, and the hull of the vehicle formed a boat. 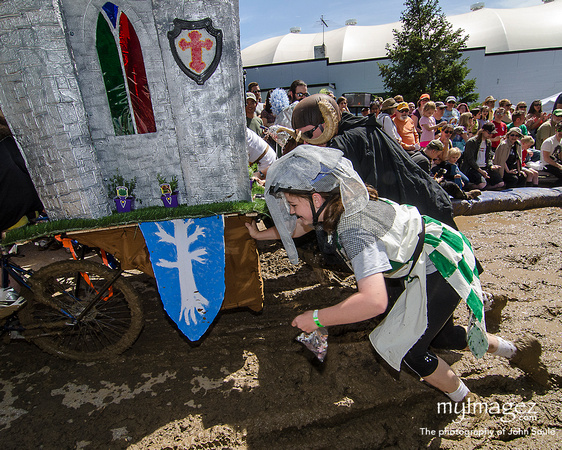 This year, each sculpture's crew consisted of teams of returning veterans and/or new entrants - some had finely tuned works of art, others hoped to wing it. Many of the teams had competed in the past and thought that they were well prepared for the challenge.  And there were some that were quite surprised at what work the team had to go through to get their sculpture successfully through an obstacle. 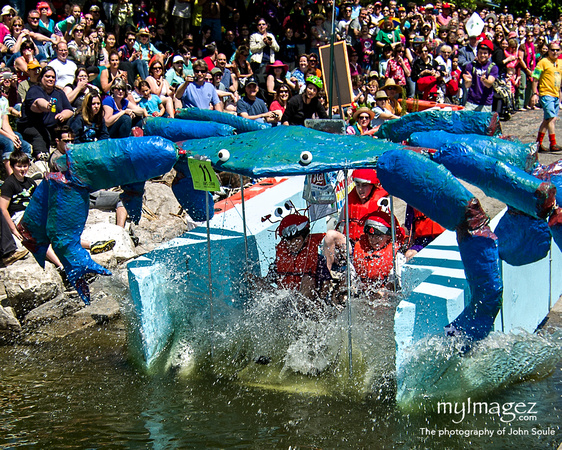 One of the highlights of the day was the water event.   Some sculptures eased down the boat ramp into the Inner Harbor as others entered with speed to make a splash. But once in the water, the sculptures had to stay afloat, maneuver around a pier and then make their way up an inclined ramp. And, this was no easy task for many of the teams. Mechanical problems and design flaws are often no stranger to this part of the race. At one point a large green frog and crew were floating sideways in the harbor and later a giant blue crab and crew drifted out of control only to find that their gears were jammed by a sock puppet. Kayakers were on hand to assist 'out of control' sculptures whenever necessary. 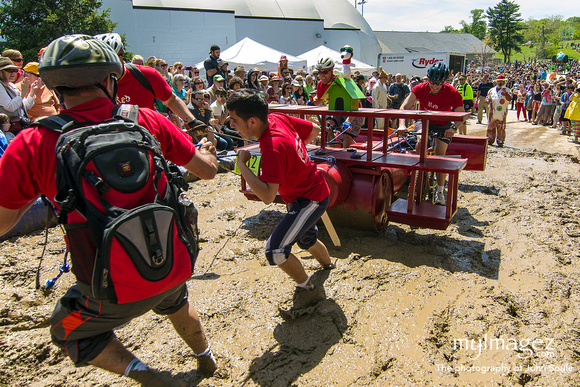 The most difficult obstacle was the  mud pit.  This  was especially difficult for many to navigate and required some pure muscle to pull the sculptures through. And yes, you may get a little dirty on this one.

Rules of the course 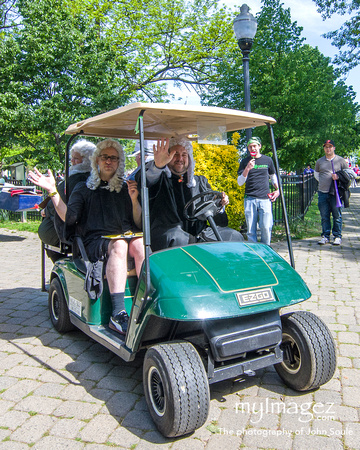 There are rules in the race, and a team of judges, adorned in wigs and black robes, monitored the course.

Bribing judges is expected and actually encouraged (even an award is given for the 'Best Bribes'.)

Dress Wacky and Have Fun 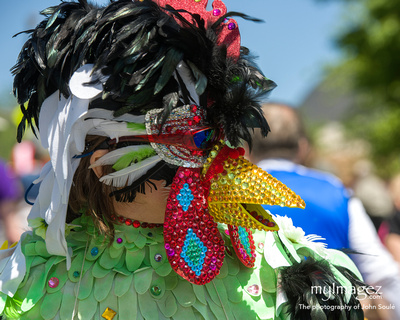 Two of the directives for those participating in the race and spectators "No matter the job, no matter the weather, you still have to dress funny. No whiners." 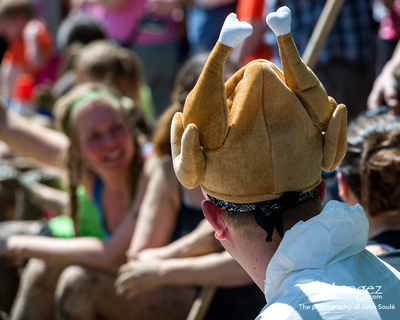 And dress funny they did...

The first Kinetic Sculpture Race was held in 1969 in Ferndale, California. Local artist Hobart Brown decided to upgrade his son's tricycle, and by the time he was done, he had added a great deal of material including two more wheels. A neighbor, also an artist, thought he could make something better than Mr. Brown's Pentacycle and challenged him to a race during the upcoming town arts festival. The race received national attention after photos were published of a congressman riding the Pentacycle.

In the 1970s, the original racecourse evolved and became more technically challenging. It had now grown to span three days and included major segments on water, mud, and sand dunes along the Pacific Coast. The sculptures became more elaborate and so did the costumes. 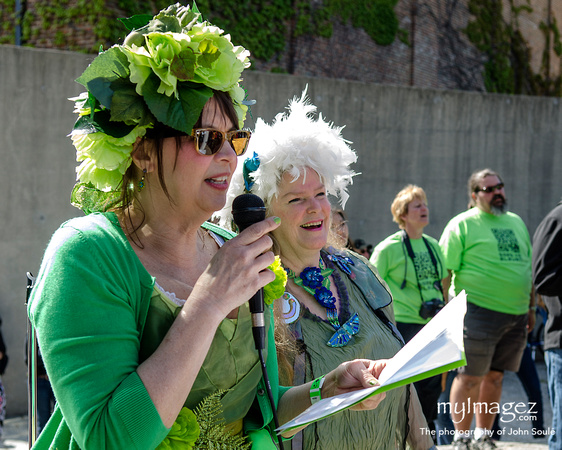 The Baltimore Kinetic Sculpture Race (also known as the East Coast Championship) began in 1999 when Rebecca Hoffberger, founder of the AVAM (seen here on the right), heard about the World Championship on television.

She wanted to bring the race to Baltimore, and worked with Hobart to do just that. For the first year, there were just six entries. AVAM built the Cha Cha Bird, the most impressive sculpture that year that served as inspiration to others. Two years later in 2001, the Chicken was rebuilt as Fifi the giant pink poodle—and has been the race’s mascot every year since. 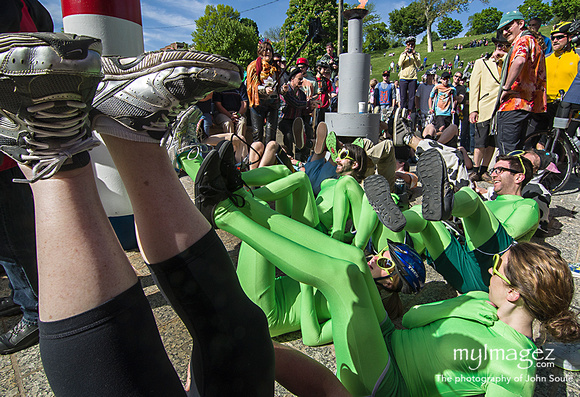 After a few words opening remarks,comes the lighting of the symbolic game torch by last year's winner and the blessing of 'de feet'. 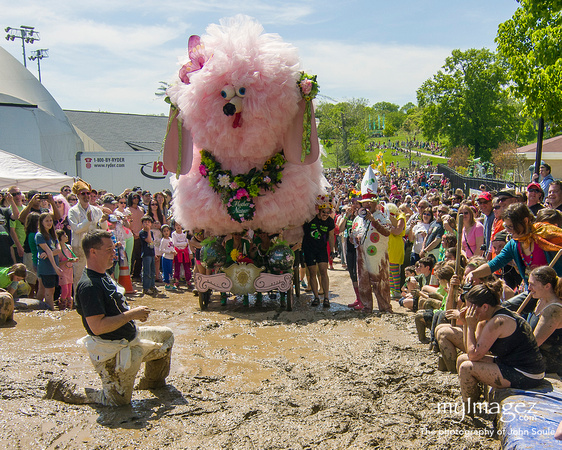 It is not every day a giant pink poodle assists with a marriage proposal.

However, this is the KSR and anything can happen! 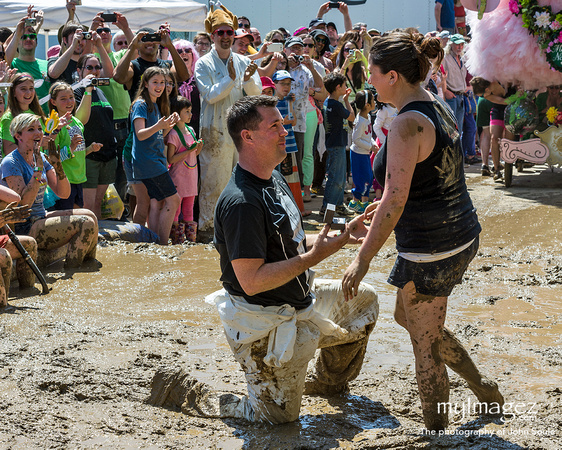 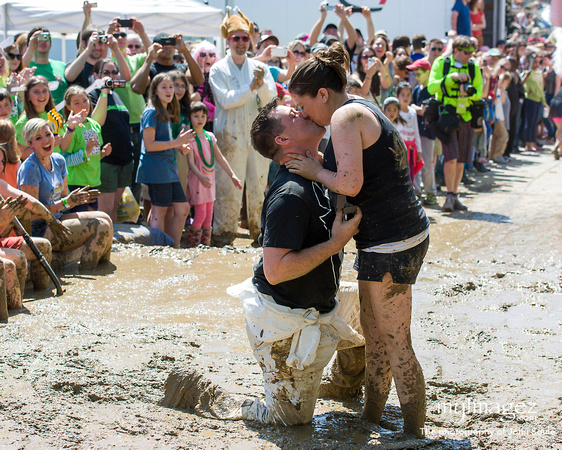 During the mud pit event, Fifi delivered a special package to Bob Keefer, 38. The moment unfolded with pure precision and caught everyone by surprise as Keefer took a small box from the giant pink poodle, took off his shirt to reveal a tuxedo shirt underneath, got down on one knee and proposed to his girlfriend, Erin Alexander, 30.

KSR - one surprise after another.

Winner of the 2013 Grand Mediocre East Coast Championship is Eek!, an amphibious human-powered oversized Rube Goldberg mousetrap. The mouse on the trailer rotated round and round. 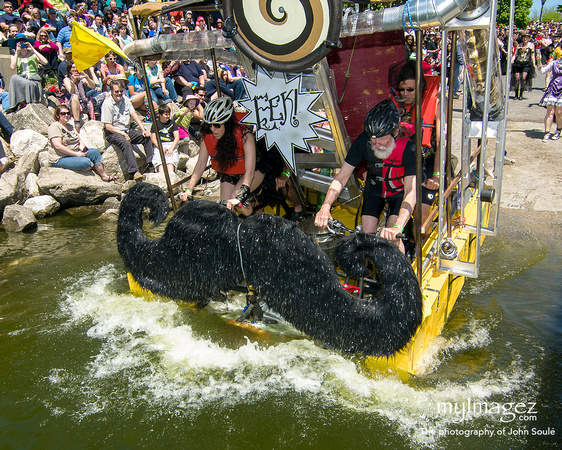 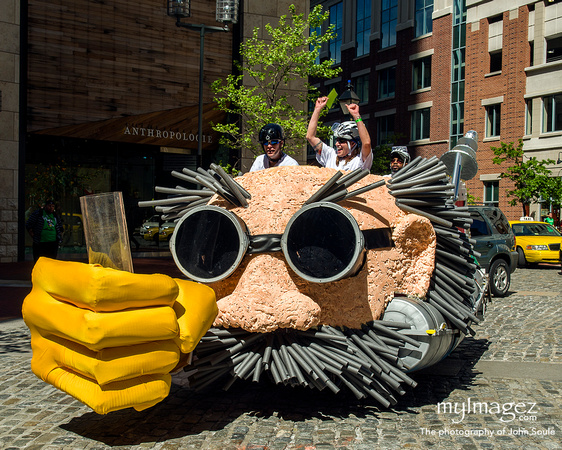 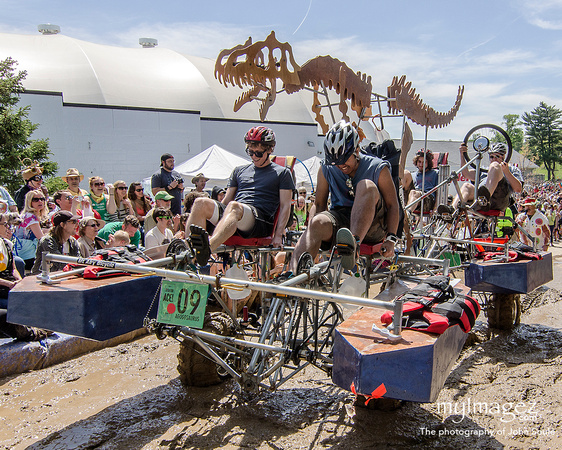 The Holy Grail was a last-minute entry based on the Monty Python film and won the Best Costumes award for their distinctive costumes including a fur-clad knight and the Killer Rabbit of Caerbannog. 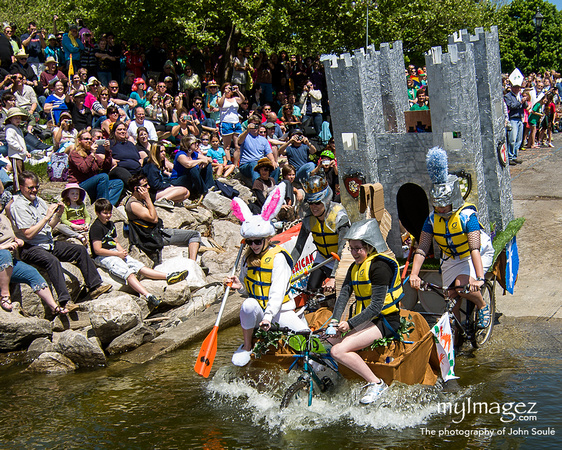 Loose Cannon was brought back  again this year  - the huge 12-foot wheels with the circus human cannonball motif make for a spectacular sight.  The elevated pilots’ platform—which looks to be a rowboat—provides flotation for the water segment.  Since this sculpture nearly missed major awards, yet is a magnificent crowd and photographer-pleasing spectacle, it was awarded the Webmaster’s Delight. 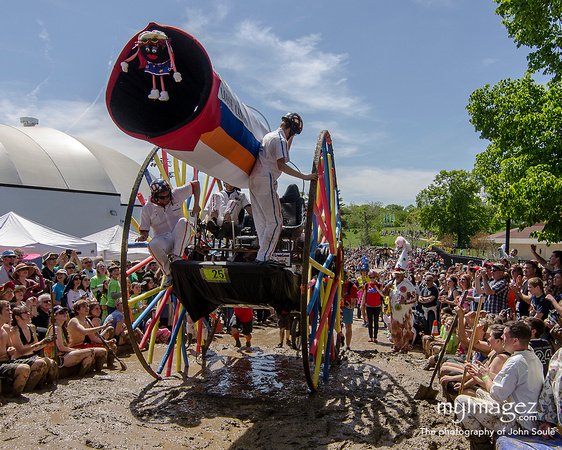 They also built two new sculptures as scale replicas of the original. Since the new sculptures could hardly get any bigger, they made them smaller. The half-scale Sun of a Gun and quarter-scale Mini Gun formed one group at the starting line, called the Gun Show Collective.

For its spectacularly designed sculpture, Go Ask Alice from Millersville (and Lewis Carroll) again won People’s Choice, based on a spectator survey conducted by race volunteers. 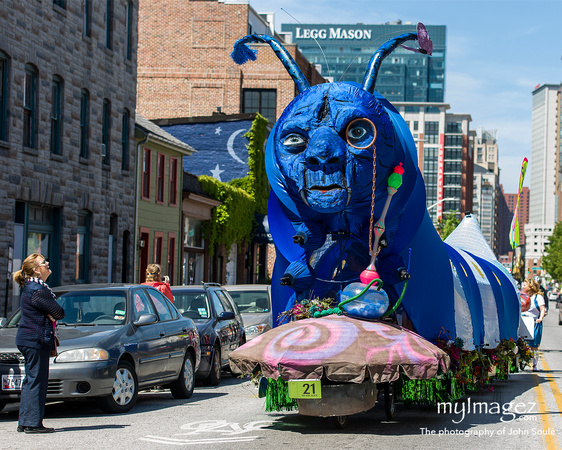 Despite all the traffic, the red Not-So-Angry Bird seemed to find a fast way to the finish line. He won the Speed award for fastest time after accounting for time penalties from tickets. 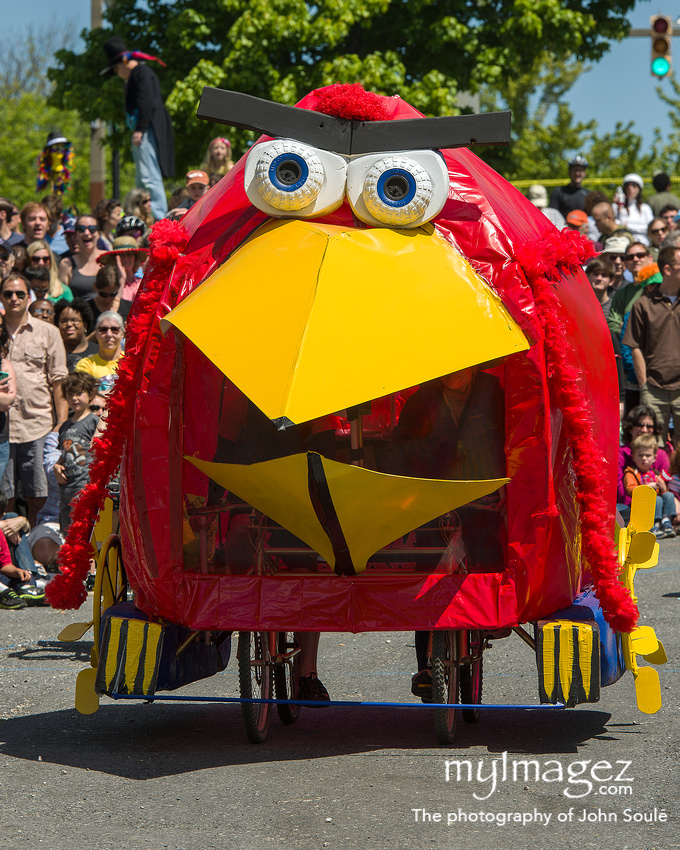 Back Alley Farm is a new entry from Washington DC designed to commemorate urban gardening: sustainability and environmentalism, a misguided do-it-yourself spirit and other hipster ideals, not to mention rats and alley cats.

“Vegetation without Representation” recasts the Revolutionary War slogan used by Washington DC where citizens pay federal taxes yet have no representatives or senators, so the District’s laws are political pawns of Congress. 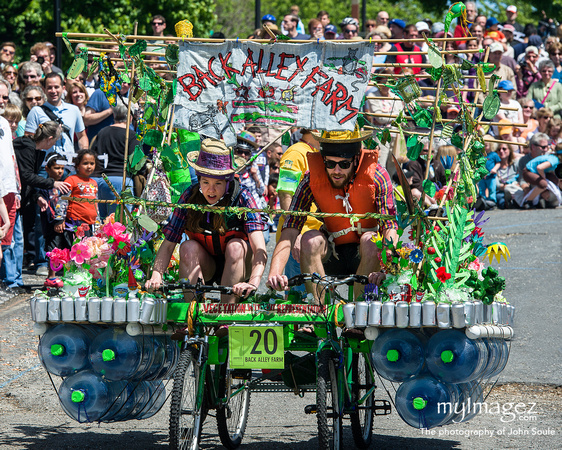 Spirit of the Glorious Founder: Frednan

For the insanity to create this sculpture  and walking the entire 15 mile racecourse, Frednan received the Spirit of the Glorious Founder award. 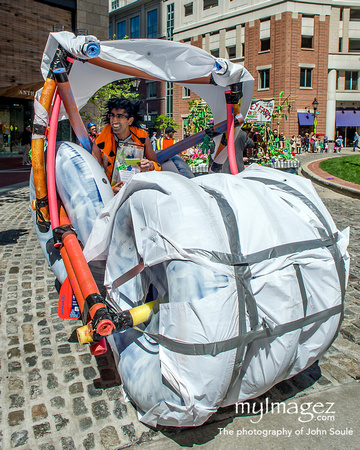 When the race started, Desdemona Duck did not. They lingered behind until all other sculptures left the American Visionary Art Museum. After amputating their duck’s tail, they began the race. For this breakdown before the starting line, they received the Golden Dinosaur award. 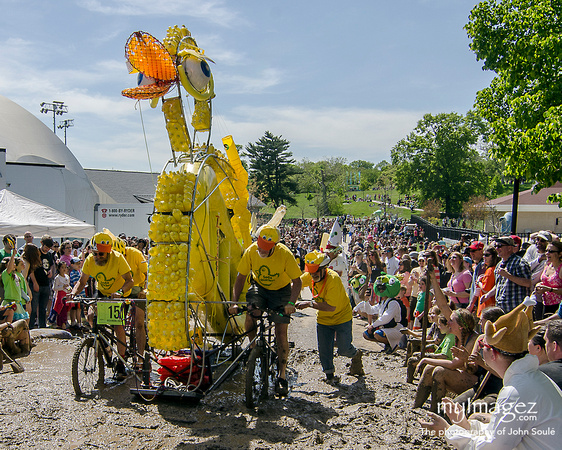 Get Tanked was awarded Worst Honorable Mention. While they crossed the starting line intact and submitted as an ACE entry, they soon broke an axle and couldn’t move except via pushing. 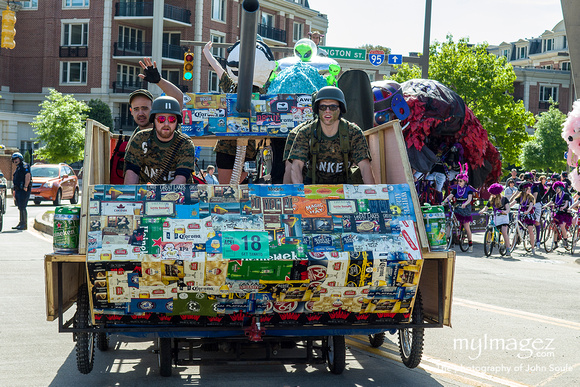 From Baltimore’s own Make Believers team commemorates Druid Hill Park as Baltimore’s first center of genetic engineering. Millennia before Johns Hopkins and the University of Maryland Biopark, druids danced across the hills and sorcerers commanded a fantastic menagerie. Garden of Hedon won the Golden Flipper award for their dramatic entry, perhaps partly because no other team suffered a worse fate this year.

Byte Me came illustrating how humanity is dependent on technology—whether oil, alcohol, electronics, or nuclear waste.  They won Best Bribes for the eggs they gave to judges and other officials. 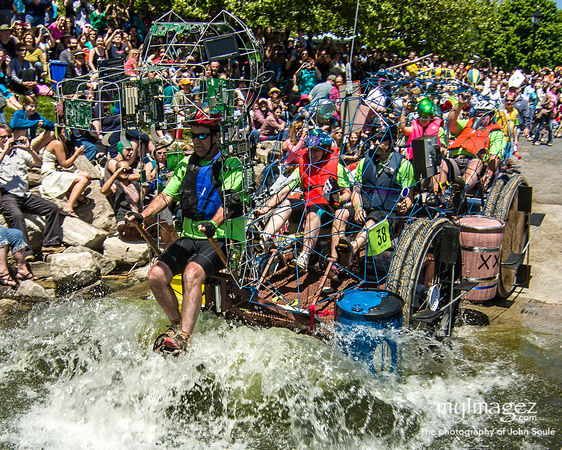 Footnote
Baltimore is the home to some wacky, fun events every year and this is just one of them. I covered this event last year and, to my surprise, this year was even better. You really have to love these guys and appreciate the hard work that goes into this event.

This was just a sample of the full day of this event.  For more information, please see: http://www.kineticbaltimore.com. 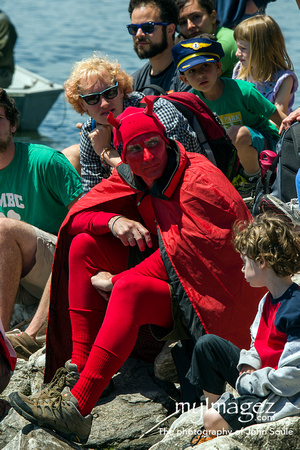 And, if anyone questions your sanity when attending this event  - you can always say the 'Devil Made Me Do It'