And Now For Something Completely Different - KSR 2012 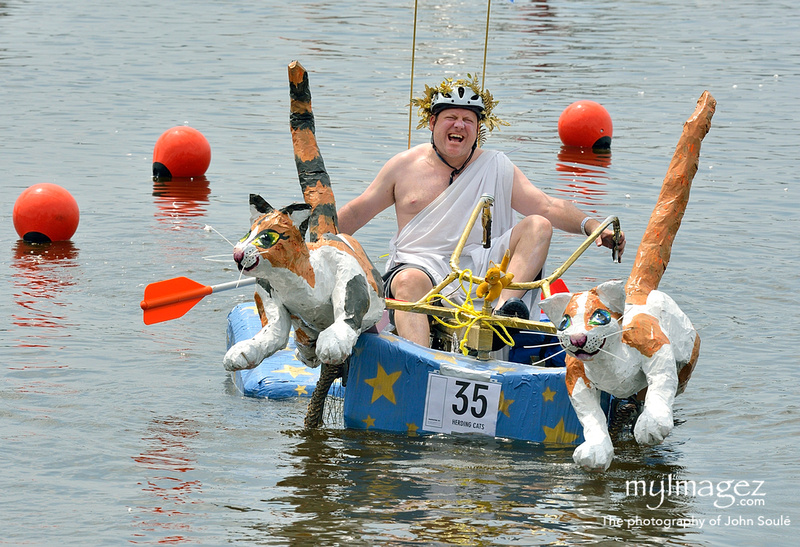 Kinetic Sculptures are amphibious, human powered works of art that have been custom built for this unique race. Each May, the American Visionary Art Museum (AVAM) hosts the East Coast Kinetic Sculpture Race Championship at the Baltimore Inner Harbor in Maryland.  The race covers nearly 15 miles and lasts all day. The sculptures compete in a race that takes place mostly on pavement but also includes a short trip into the Inner Harbor and an obstacle course of mud and sand. 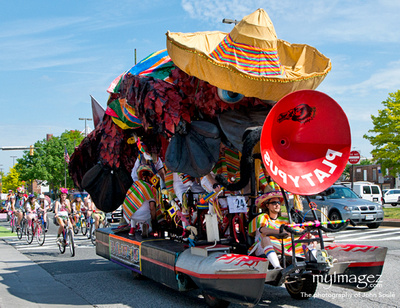 In the words of the AVAM, this is "...a race of wacky, imaginative, TOTALLY HUMAN POWERED WORKS OF ART DESIGNED TO TRAVEL ON LAND, THROUGH MUD, AND OVER DEEP HARBOR WATERS constructed out of used bicycles, gears, and parts, created by a lunatic genius who tinkers around in the garage or backyard (Do you know this person?)

The machines can be simple, small crafts, piloted by only one brave soul, or they can be over 50 feet long, extremely well-engineered, sophisticated vehicles powered by a team of pilots..."

The first Kinetic Sculpture Race was held in 1969 in Ferndale, California. Local artist Hobart Brown decided to upgrade his son's tricycle, and by the time he was done, he had added a great deal of material including two more wheels. A neighbor, also an artist, thought he could make something better than Mr. Brown's Pentacycle and challenged him to a race during the upcoming town arts festival.  The winner of the race, neither of them, had created a smoke-emitting turtle that laid eggs. The race received national attention after photos were published of a congressman riding the Pentacycle.

In the 1970s, the original racecourse evolved and became more technically challenging.  It had now grown to span three days and included major segments on water, mud, and sand dunes along the Pacific Coast. The sculptures became more elaborate and so did the costumes.

The Race comes to Baltimore

In 1999 Rebecca Hoffberger of the American Visionary Art Museum (AVAM) first learned about the California events on television.  She thought it would be a great idea to have the Baltimore Kinetic Sculpture Race, or East Coast Championship as it is also known, and contacted Mr. Brown as how to bring the race to the East Coast.  Their collaborative efforts resulted in AVAM becoming the proud sponsor of the race every year since.  In 1999 six sculptures entered into the race.  In 2012 this number grew to 36 sculptures.

The Baltimore course - on the land 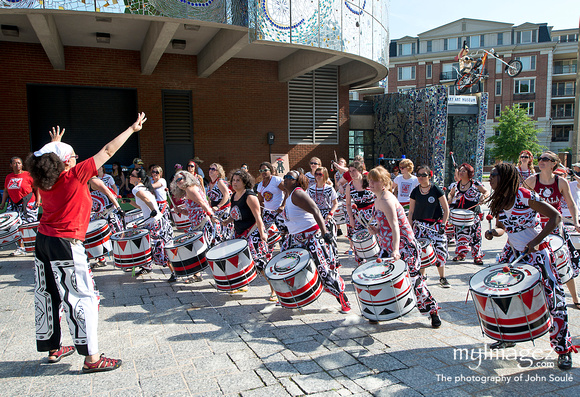 The 2012 race was held on May 5th and opened to a rousing routine by the Washington DC BATAL Drum Team performed in front of the American Visionary Art Museum.  As crowds quickly gathered and started to cheer, the contestants made their final preparations as the race was about to begin.

The land segments of the Baltimore race now take place mostly on the right-lane of multi-lane roadways, with sculptures separated from traffic by cones or barriers that run alongside the Inner Harbor.  Some roads are completely closed.

At times the sculptures occupy regular traffic lanes - most interesting fr the drivers not in the race. The pavement portions of the race cover the greatest distance, they aren’t the most exciting parts of the race. From some the best part is when these sculptures have to negotiate the various obstacles in Patterson Park which includes mud and sand.  It was an amazing sight to see these sculptures take over the roads as police ran 'interference' for local traffic with the Baltimore skyline in the background. 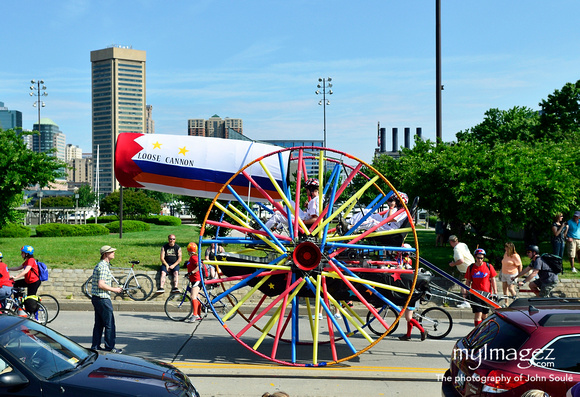 The Baltimore course - on the water 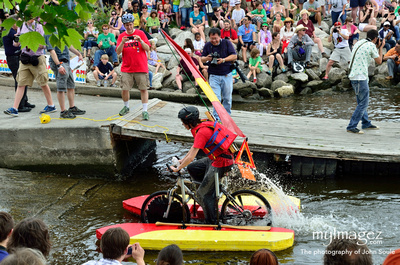 Since the original course in California included a miles-long crossing of Humboldt Bay, it was thought to be only natural to include a water challenge for the Baltimore race.  When first brought to Maryland, the competitors in Baltimore weren’t prepared for the waves on the Chesapeake Bay.

Entering the Baltimore Harbor requires a robust boat design and, yes, some do sink.   When the race was first brought to Baltimore, the Coast Guard prohibited these unseaworthy crafts from the crowded Inner Harbor waters for fear of endangering other boaters.

In the early days, there was no permanent boat ramp at the water entry, so a temporary ramp had to be installed each year.  The ramp was so steep that most sculptures had to be lowered on ropes and returning up the ramp was such a hard climb that most sculptures needed a great deal of help to exit.  A steep dual concrete ramp has now been installed and sculptures enter the water with a splash on their brief journey that includes a maneuver around a short pier.  The problem is still getting back up the ramp.

In addition to the sculptures and wacky looking spectators, on you will also  find: 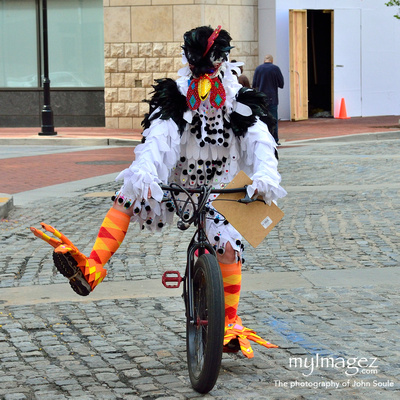 Kinetic Chickens: Volunteers who keep the race on track, and answer questions from the public.

Kinetic Kops: Officers who issue tickets to sculptures when they break the rules (and sometimes when they don’t). Each ticket carries a time penalty.

Kinetic Kops are known to accept bribes to overlook all but ACE and safety infractions.

Kinetinauts: The fearless artist engineers who build and pilot sculptures. 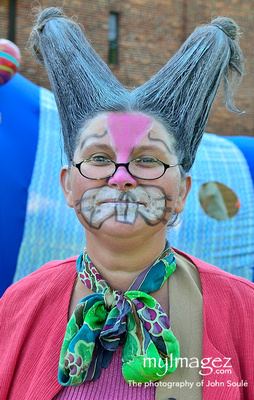 This truly is a spectator sport.  Many spectators get fully involved and are encouraged to wear something completely different as they cheer on their favorite team.  In fact, in order to not be ticketed by the Fashion Police, the sponsors suggest spectators wear really wacky outfits.

All along the racecourse, one could see all sorts of costumes - and the more wacky - the more fun it was.  And dress up was not limited by age.  Lawn chairs were set up along the course and people of all ages would shout and blow air horns as the teams passed by.

To the winner goes the spoils - sort of

I find that the Kinetic Awards are almost as wacky as the race itself:

With contestants such as 'Traffic Jam', 'Loose Cannon', 'Riot-n-Roll', 'Poseidon's Adventure'  and the like, the incumbent, 'El Platypus', faced a real challenge this year.  Champions are eligible for the 42-mile Kinetic Grand Championship over Memorial Day weekend to be held in Humboldt County, California. Some of this year's winners were: 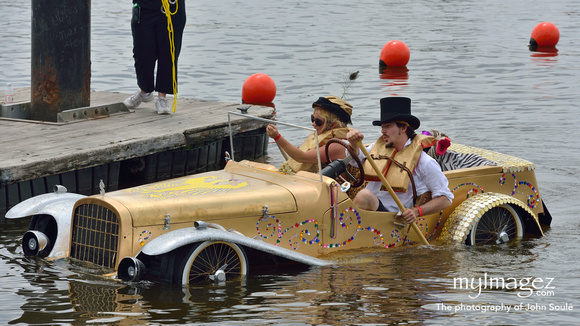 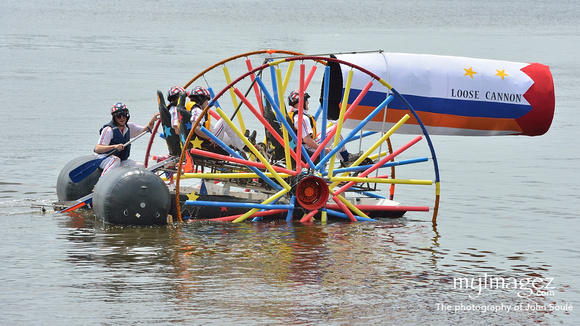 You have just got to love these guys!

Check out the video as KSR 2012 invades the streets of Balitmore: